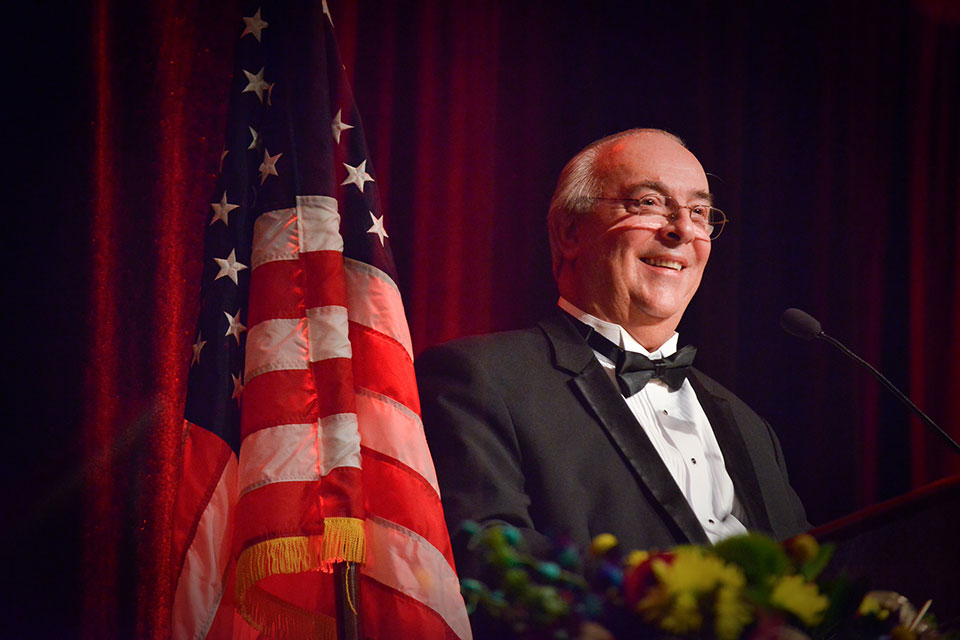 As a member of the second class of honorees—the award program launched in 2017—Bain was among 24 leaders over the age of 60 recognized for their notable success and strong leadership. Also included in this year’s class was Wayne LeChase, chairman of LeChase Construction and member of the College’s Board of Trustees.

At Fisher, Bain enjoyed a 40-year tenure as a member of the faculty, and throughout his 11-year presidency, led the College through a decade of exceptional growth in terms of enrollment, academic program development, and campus footprint.

Bain completed the reorganization of the academic departments into schools by creating the Wegmans School of Pharmacy, School of Arts and Sciences, and the Wegmans School of Nursing. That reorganization led to the creation of the College’s first doctoral programs, including the Doctor of Pharmacy (Pharm.D.), Doctor of Nursing Practice (DNP), and Doctor of Education in Executive Leadership (Ed.D.) programs. With that growth, came the formation of Fisher’s first satellite locations at the College of New Rochelle and the Onondaga Community College Regional Higher Education Center, both of which administered the Ed.D. Program. He also supported the creation of additional 2+2 articulation agreements with community colleges across the state, further expanding Fisher’s reach.

Campus saw enormous change during his presidency with the addition of Keough Hall, the Campus Center, the William A. Fay Building, LeChase Commons, the Joseph S. Skalny Welcome Center, Lavery Library Gateway, the Polisseni Track and Field Complex, the Victor E. Salerno Center for American Enterprise, the Simulation Center in the Wegmans School of Nursing, Pellicano Pavilion, and the expansion of Dugan Yard.

Bain also fostered a number of partnerships with a variety of organizations in the community including the Buffalo Bills, Camp Good Days and Special Times, and the Rochester-Waterford Sister Cities Organization, and supported international educational partnerships with Waterford Institute of Technology and National University of Ireland – Galway.

His impact on student life was also extraordinary, and led to the announcement of the Donald & Margaret Bain Scholarship at his retirement gala in 2015 which totaled $250,000 and today supports student leaders on campus.

His accomplishments before his tenure at Fisher are vast and include time served in the United States Navy as a member of a combat aircrew. A Vietnam-era veteran, Bain was also elected to four terms as a Town Justice in Williamson, New York.

Upon his retirement from the presidency, the Board of Trustees named the Campus Center in his honor and awarded him the title of President Emeritus. He remains a member of Fisher’s faculty today, and teaches at both the graduate and undergraduate level.