Dr. Greg Cunningham is an expert on the olfactory senses of birds, having researched how penguins, hawks, and seabird chicks react to different odors. In the next iteration of his research, Cunningham traveled to the Northwest coast of Costa Rica to work with professors from Veritas University to test how fish might react to the scent of a chemical in the water. For this trip, he brought along senior Jenna Keppel, a summer research fellow, to work alongside him. 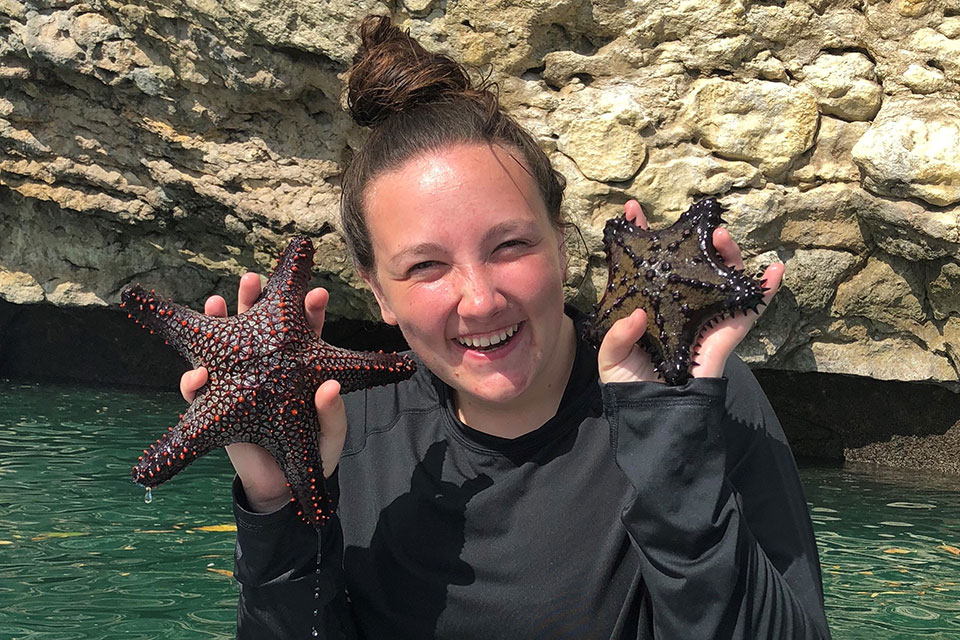 Cunningham first traveled to Costa Rica a few years ago to meet with professors at Veritas about Fisher’s study abroad program. While there, he struck up a conversation with biologist Dr. Sebastián Hernandez, and after finding similarities in their research, the two decided to collaborate on a project.

Keppel, a biology and sustainability major from Buffalo, New York, has a passion for marine conservation. She twice traveled to Roatan, Honduras with her high school marine biology club to learn about efforts in conservation there. She jumped at the chance to better understand the marine ecosystem of the coral reef while experiencing field research firsthand.

“The coral reefs are so important and do so much for us,” said Keppel, who hopes to pursue a career in conservation awareness or higher education sustainability.

As a student in Fisher’s Summer Fellows Research program through the Center for Student Research and Creative Work, Keppel was able to conduct a literature review of past studies under Cunningham’s guidance.

Following methodologies laid out in previous studies, Cunningham and Keppel developed a new study to see if fish would respond to the odors of DMS, a chemical which is naturally produced by algae and is associated with areas where there is a lot of food to be found.

“My experience with this chemical has historically focused on what it does in the air,” Cunningham explained, noting that it attracts sea birds when it’s released. “Some of the work done in the Gulf of Mexico looked at the aquatic version of the odor and found that fish were attracted to it. We’re building on that research.”

To conduct the study, the researchers released the odors under water using a carboy and recorded fish swimming around the area of the container for 15 minutes. They repeated the procedure three times a day for a two-week period.

In addition to learning the process of field research, Keppel also learned how to adjust research procedures on the spot. The team had hoped to build a sensor that would measure the amount of naturally occurring DMS in the water, and over the course of the year, see if concentrations of DMS affect the migratory patterns of fish. But complications in its construction prevented that from happening. Once on the Central American isthmus, they also had to make changes to their study based on the equipment that was available to them and the areas in which they were conducting their study.

“We don’t think the carboys were distributing the odor as consistently as we wanted them to,” Cunningham said. “So, we’re talking about potentially changing the way we do the experiment going forward.”

Keppel is planning a potential second trip to Costa Rica in December to test another variation of the study. In the meantime, they are beginning to review the footage and conduct a data analysis to assess the reaction of sea life to the chemical. After the analysis, Cunningham hopes to publish a paper on their research.