“The Laramie Project” Sets Stage for Discussions of Justice 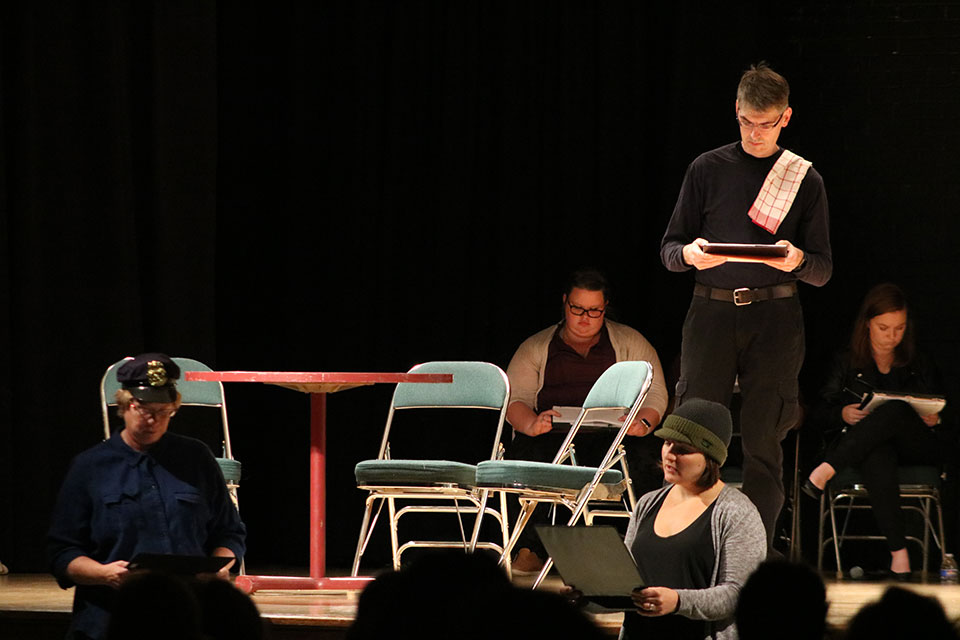 Held in Cleary Auditorium, the reading was part of the 2018 Teach-In on justice and complemented a lecture from “The Laramie Project” collaborator Stephen Belber, who also met with various classes in theater, screenwriting, and playwriting.

The play was published in 2000 to document the 1998 killing of Matthew Shepard, a gay student at the University of Wyoming. The murder set off a national dialogue about hate crimes and hate crime legislation. The play takes a local focus around Laramie, featuring a dramatic presentation of interviews of the residents of the town and individuals who knew Shepard.

Fifteen faculty, staff, and students were involved with “The Laramie Project,” and the event raised $200 for the “It Gets Better Project,” which encourages and supports young people struggling with the coming out process.

Jeremy Sarachan, who served as the director for the stage reading, noted that the production was developed in just five rehearsals, and hopefully served as a starting point for discussions happening the follow day during the Teach-In.

“The death of Matthew Shepard was a tragedy for his family and friends and everyone who has come to know of him, and is also another instance of the repetitive cruelty of hate crimes in our country,” Sarachan said. “The play took us to the town of Laramie, Wyoming in the late 1990s so that we could better understand the effects of such a horrible event. We also learned what kinds of attitudes led to a crime both unimaginable and now entrenched in our history, and all we can do now is tell the truth of what happened. As Father Roger Schmit states in the play, ‘I will trust that if you write a play of this, that you say it right. You need to do your best to say it correct.’”