Sometimes in life you travel many different paths, and where they converge is the road you were meant to follow. 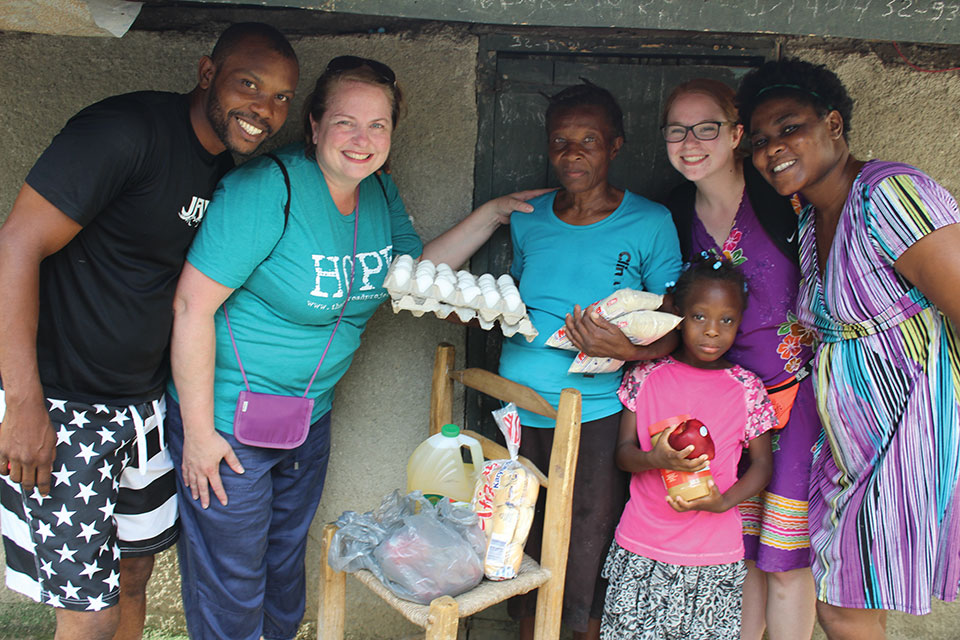 When her children were young, April Benson was afforded the opportunity to work from home as a medical transcriptionist, eventually opening her own transcription company. This path led her to love the medical industry, and at the age of 40, she felt a calling to become a nurse. She took a leap of faith, jumped on a new path, and entered college for the first time, enrolling at Fisher in the Wegmans School of Nursing.

In 2012, a few years into her studies, Benson’s daughter was planning a trip to Haiti with her church youth group.

“Being the free spirit that I am, I said, ’count me in,’” recalled Benson.

They were visiting Haiti just two years after the devastating earthquake of 2010, and what she experienced was unfathomable.

“I have to admit, when I landed in the midst of a broken, chaotic airport in Port-au-Prince, I cried and wanted to go home. But, God had bigger things in store,” she said.

On her flight home, Benson realized her calling in nursing would be global, and she made the decision to embark on yet another path.

“Somewhere over North Carolina, I felt myself really beginning to struggle with leaving my fellow man behind,” she explained.

Benson committed to finishing her nursing degree and using her skills to help underserved populations.

After earning her Bachelor of Science in Nursing degree in 2013, Benson’s path took her to the cardiac/acute care floor at Unity Hospital in Rochester. The position would become the vehicle needed to assist in her next step as she returned to Haiti to build a healthcare clinic in 2016. During that trip she saw more needs, and all of her paths—nursing, a passion to help the impoverished, her love of Haiti—converged to become The Dirt Road Project (TDRP), a 501(c)(3) nonprofit organization whose primary focus is empowering the underserved.

TDRP focuses on four major cornerstones of impact—health care, education, housing, and sustainability—through agriculture and employment. Though born of her experiences in Haiti, the organization also serves local communities.

Benson sees ways that paths from her past could merge with her paths in the future. She hopes to one day lead a team of Wegmans School of Nursing students on a medical mission trip to the mountain community in central Haiti.

“I am grateful for having received my education from Fisher,” said Benson, “and I hope to continue.”

Learn more about Benson and The Dirt Road Project at www.thedirtroadproject.org.