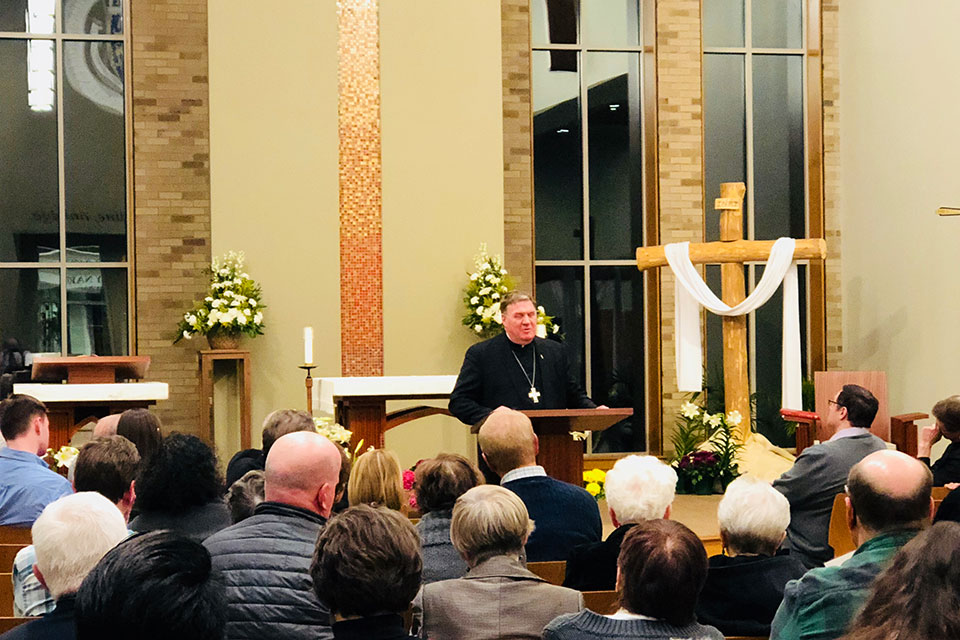 The visit was thanks to the efforts of Dr. William Graf, chair of the Religious Studies Department, Fr. Kevin Mannara, CSB, director of campus ministry, and two Fisher undergraduate students, Nora Broderick and Matt Broderick, who are the niece and nephew of Cardinal Tobin.

For Graf, welcoming Cardinal Tobin to Fisher is the culmination of a decade-long vision of hosting a senior leader of the Catholic Church who could offer insights to the campus community.

“Cardinal Tobin met my expectations and those of the many people who helped fill the Chapel,” Graf said. “Students’ written journals and conversations in some classes proved that Cardinal Tobin touched their hearts and minds with a message of hope and challenge.” 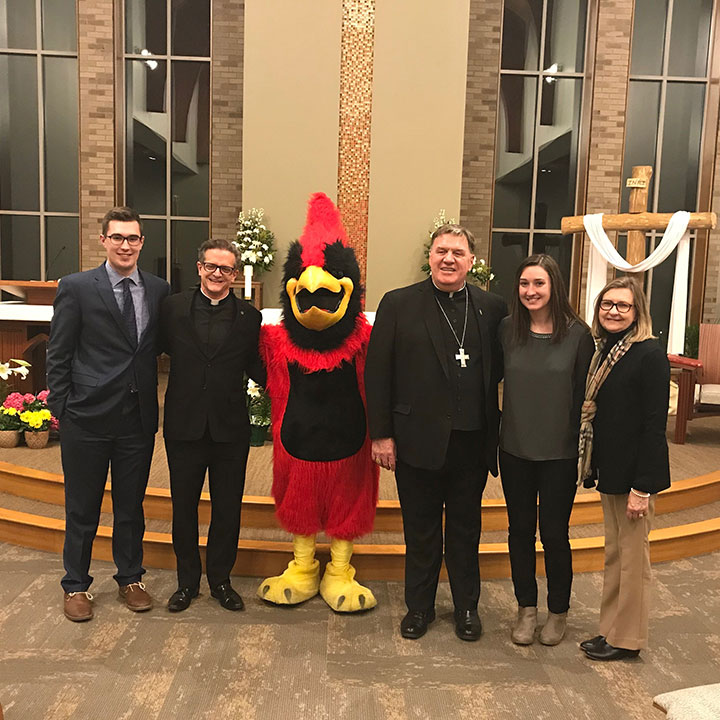 “Cardinal Tobin holds one of the highest offices of the entire Church and is a senior prelate of the United States. He is a much sought after speaker across the country,” he said. “To have a Cardinal speak at Fisher was historical.”

Cardinal Tobin professed vows as a member of the Congregation of the Most Holy Redeemer, the Redemptorists in 1973, and five years later, he was ordained to both the diaconate and the priesthood. He served communities in Detroit, Chicago, and in Rome, before Pope Benedict XVI named him to the Roman Curia post of Secretary of the Congregation for Institutes of Consecrated Life and Societies of Apostolic Life and titular Archbishop of Obba in 2010. Two years later, he was tapped to serve as the Sixth Archbishop of Indianapolis. In November 2016, he was appointed the Sixth Archbishop of Newark, New Jersey and in the same month, was created Cardinal.

During his lecture, Cardinal Tobin marked the fifth anniversary of Pope Francis’ election to the papacy, reflecting on his vision for the Catholic Church. Tobin explored the Pope’s goal for the nature of the Church to be one that “looks outward,” and be an “agent of mercy and a recipient of mercy.”

He also spoke of Pope Francis’ focus on the need to “read the signs of the time,” and how that relates to the issues faced by refugees.

“He knows that worldwide, this is the problem of our time,” Tobin said of the refugee situation. “One out of every 42 people on this earth is a refugee.”

Tobin also discussed the Pope’s encyclical on the environment, which was released in May 2015.

“This is the first time a Pope has written an encyclical on the environment,” he explained. “The document carries weight because it informs Church officials on a single issue.”