In this section
Home » News and Events » News Archive » Spring 2018 » Costigan, Kozan, and O’Brien to Retire

Costigan, Kozan, and O’Brien to Retire

Professors Robert Costigan and Kamil Kozan and Associate Professor Marcia O’Brien will conclude their service at the College at the end of this year. Before they say farewell for good, we caught up with their colleagues to learn a little about their lives at the College, and find out where their lives after Fisher might take them. 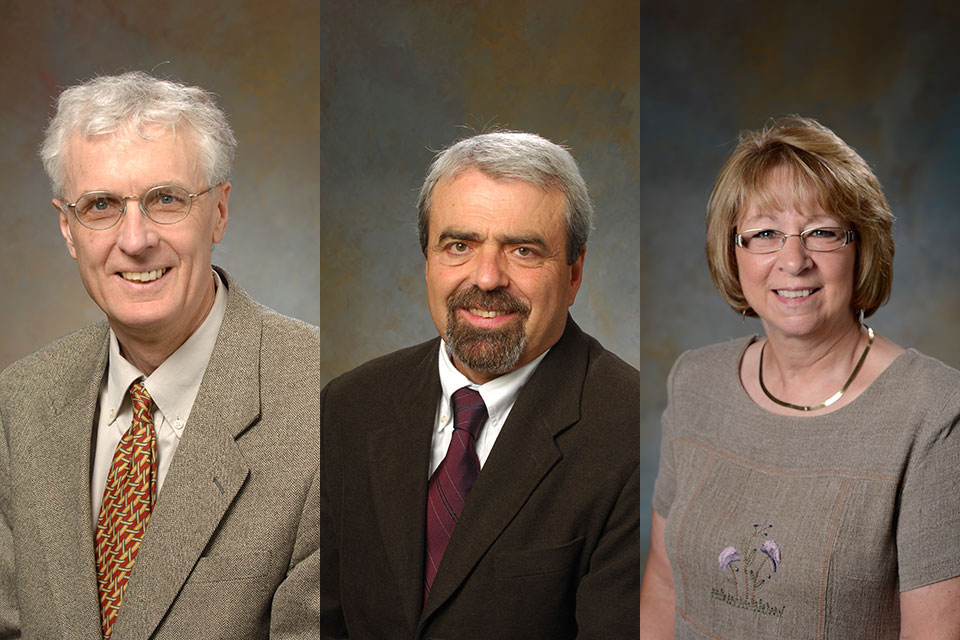 Both Costigan and Kozan taught Organizational Behavior for over a decade and were seminal to the creation of the major in human resources management. Encouraged by the learning experiences in their first exposure to a business class, many students went on to pursue degrees in the School, said Dr. Jason Berman, a longtime colleague of the two retirees.

“It all began with Kamil and Bob,” he said.

After 28 years at the College, Costigan said his all-time favorite course to teach was Organizational Behavior, with Staffing Human Resources as a close second.

“Bob is a prolific scholar and beloved by his students, inspiring them with his creativity and energy in the classroom,” said Berman.

A lifelong learner, Costigan has a number of research projects focused on oral communication that he is currently working on and will likely continue for the next four years. And, a lifetime runner, he is now hiking the foothills daily and continues to actively volunteer at the Mother Cabrini Shrine in Golden, Colorado. He and his wife, Pat, have plans to travel to the Holy Land, the Camino in Spain, Ardmore (Ireland), Lourdes France, and visit friends in Turkey over the next few years and also visit their daughters in Montana and Washington with a good number of short trips in Colorado and Utah.

Reflecting on his classroom experience, Kozan, who spent 32 years at Fisher, most enjoyed teaching the Research Methods course, noting that he liked that students have an inclination to think in ways that lead to an inference, which will likely stay with them long-term and can be used in a work setting that encourages evidence-based decision making.

In retirement, Kozan plans to further practice his photography, play tennis, and learn to cook (much to his wife’s delight!).

While O’Brien’s tenure with the School of Business was only four years long, colleagues say she’ll leave a lasting impact on the Accounting Department.

Laurel Parrilli, a fellow faculty member in the department, noted that O’Brien stepped into the role of chair during a transition period for the School.

“She shouldered a lot and worked hard to keep us afloat and moving in a positive direction,” said Parrilli. “I think I speak for everyone when I give her very heartfelt thanks for her time at Fisher and best wishes for a long and happy retirement.”

Mike Fedoryshyn agreed, noting that she served as a calming influence on the department since joining Fisher from Roberts Wesleyan.

“Her patience, understanding, and management skills honed by many years at Xerox have helped the department in the transition from the old guard to the department of the future,” he said. “Her efforts for the students, commitment to the ideals of Fisher, and support of the department and School of Business is greatly appreciated!”

In the classroom, her influence was just as impactful. O’Brien enjoyed all of the courses she taught, noting they were each unique because of the chemistry with the students. Her philosophy is to identify the chemistry happening in the classroom, and adjust her teaching to the personalities and skill sets of that particular class. And, she enjoyed being the student as much as the teacher, noting that she learned the most from a new course she taught, Non-Profit and Government Accounting.

“Never forgetting how it feels to be a student helped me identify with the struggles students have,” she said.

This summer, she’ll again learn something new: how to relax. With a list full of post-retirement plans, she looks forward to throwing away her agenda and simply doing what she wants when she wants to do it. The formula for a happy retirement, indeed.