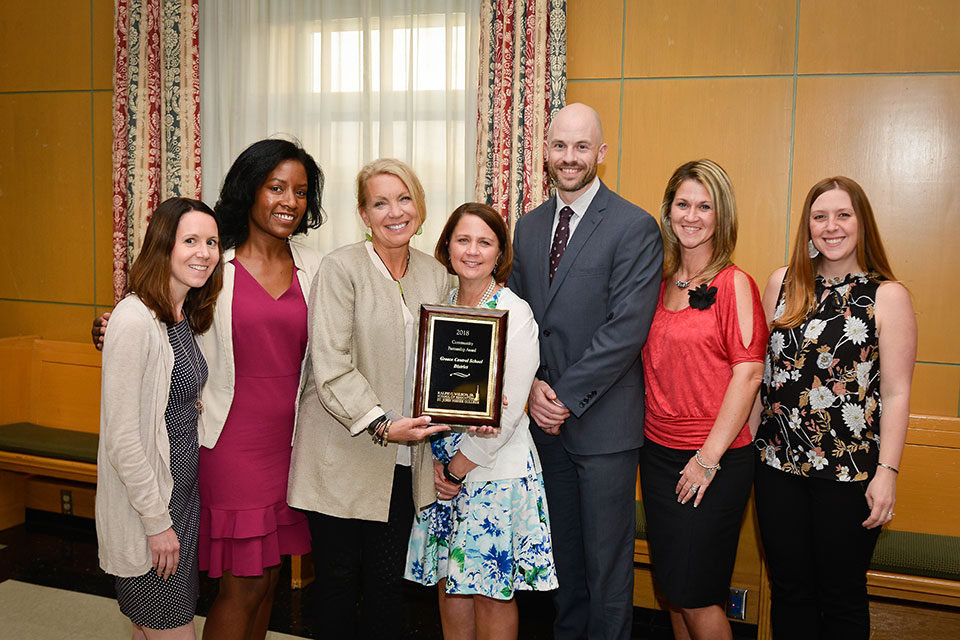 The School honored the Greece Central School District with the Community Partner Award, which recognizes the great resources that relationships with schools in the region provide.

Four awards were given to undergraduate students, recognizing their academic excellence, leadership, and commitment to education.

Alicia Murray, an inclusive education major, was given the Outstanding Undergraduate Teacher-Community Service Award, which recognizes a candidate who has demonstrated the use of community service in ways that connect teachers to the communities they serve, impacting and improving learning and growth for all.

The Outstanding Undergraduate Educator-Adolescence Award was given to inclusive education major Antonia Piccirillo, who was honored for her involvement in activities that exemplify the School of Education’s social justice tenants of diversity, achievement, compassion, knowledge, and service, as well as for her achieved academic excellence. 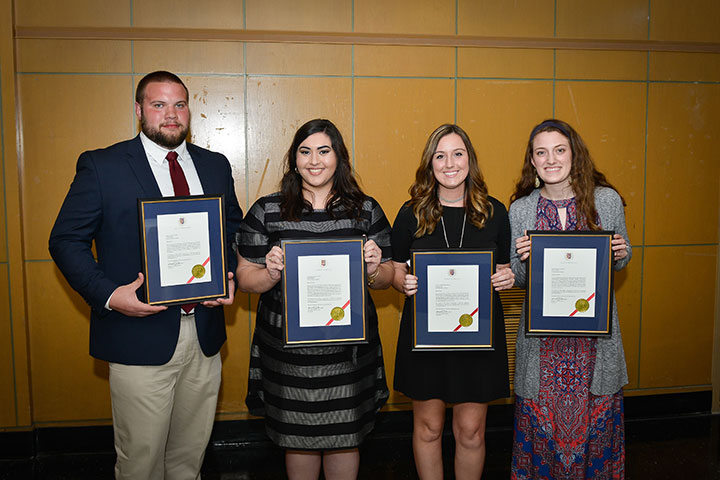 Inclusive education major Elizabeth Albright was given the Outstanding Undergraduate Educator-Childhood Award. Like Piccirillo, Albright was recognized for involvement in activities that align with the School’s social justice tenants and for her academic successes.

The Outstanding Undergraduate Teacher-Leadership Award was given to John Coleman, also an inclusive education major. Coleman was honored for modeling leadership through campus involvement and by serving as a positive influence to his peers.

Jaclyn Racines was given the Excellence in Literacy Education Award, which recognizes significant contributions in the literacy graduate program from students who exemplify the attributes and values of a highly effective literacy professional.

Recognizing leadership and the potential for a distinguished career in a diverse and rapidly changing society, the Outstanding Childhood Education Student Teacher Award was given to Bridget Hanna while Daniel Rogers received the Outstanding Adolescence Education Student Teacher Award. Both awards recognize candidates who have utilized exemplary knowledge, skills, and dispositions to impact student learning during student teaching. 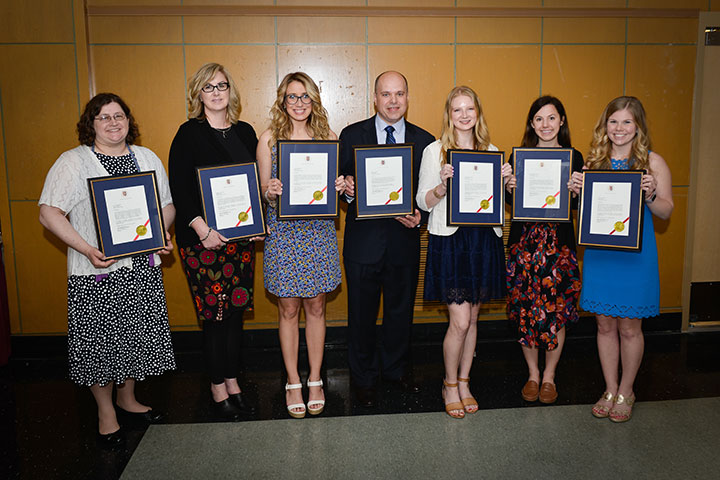 Barry Tierney was this year’s recipient of the Dr. Ronald Edmonds Award of Excellence for demonstrating the passion for raising awareness of and commitment to providing all students with the support needed to be well-educated, as was shown by the award’s namesake.

The Distinguished Leadership Award, given this year to Kristen Schmidt, recognizes her significant contributions to class discussions and group projects, and acknowledges her as a candidate who exemplifies the attributes and values of effective leadership.

The Distinguished Library Media Award was given to Karen Burns for her significant contributions to class discussions and group projects, as well as her effective leadership.

During the ceremony, the School also announced recipients of the Distinguished Alumni Awards, which recognize Fisher graduates for consistent, outstanding performance as exemplary models of the College’s very proud heritage of preparing leaders in education and public service.

The Distinguished Teaching Award was given to Lauren Cirulli ’09, who holds degrees in history and adolescence education from Fisher and a master’s degree in teaching English language learner from Syracuse University (SU). She teaches English as a second language (ESL) in the Syracuse City School District where she leads efforts to help her students connect with the community and strengthen the home-school connection.

Cirulli hosts the annual event “We Are Syracuse” at SU to promote community awareness of refugee and immigrant achievement. Her research into ESL teaching has been shared at several professional conferences on the regional and national levels.

Outside of her career, Cirulli advocates for her students through college visit trips - including Fisher - with the Catholic Youth Organization, and connecting with local job agencies. In addition, she serves as vice president of the Cuse Pit Crew, a program that helps foster compassionate connections between humans and animals.

Siesto began his career in education as a social studies teacher after earning a bachelor’s degree from Iona College. He joined the social studies department at Victor Senior High School in 2001, and would serve as a class advisor, head coach of the modified and junior varsity girls’ soccer teams, and the National Honor Society selection committee. 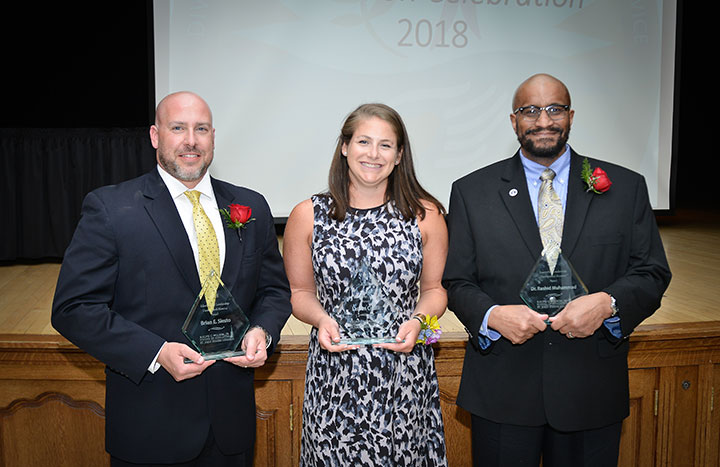 During his time in the educational leadership master’s program at Fisher, he served as an administrative intern with the Pittsford Central School District. Then, in 2011, he was named assistant principal at Victor Senior High School.

He serves on many committees and teams in the Victor district at all grade levels, including academic program review, instructional support team for at-risk students, the curriculum council, and the district safety team. Regionally he works with the trauma, illness, and grief consortium in Monroe County.

The final award of the evening, the Arthur L. Walton, Jr. Executive Leadership Award, was presented to Rashid Muhammad ’14 (Ed.D.).

Muhammad is the director of operations for the Rochester-Monroe Anti-Poverty Initiative (RMAPI). In this role, he is responsible for coordinating the anti-poverty efforts of over 50 community, government, and private organizations in the Greater Rochester Area.

A retired United States Air Force officer, Muhammad served for more than 20 years on active duty at several overseas and stateside locations. He is also a retired engineering manager and aerospace program manager having worked at Harris Corporation’s Space and Intelligence Systems Division. Muhammad earned his doctorate in education from Fisher and completed his doctoral field work with the M.K. Gandhi Institute for Nonviolence.

He is involved in several activities that focus on community dialogue efforts. From 2005 to 2012, he served as the volunteer Muslim Chaplin at the University of Rochester’s Interfaith Chapel, and currently, he is a member and the co-chair of the Commission on Jewish-Muslim Understanding.