For the last two years, pitcher Lindsey Thayer has helped the St. John Fisher College softball team make back-to-back appearances in the NCAA Division III World Series, where, in 2017, they finished second in the country. But before she found success on the Cardinals’ softball diamond, she found herself immersed in a family that bonded over learning the ins and outs of the game. 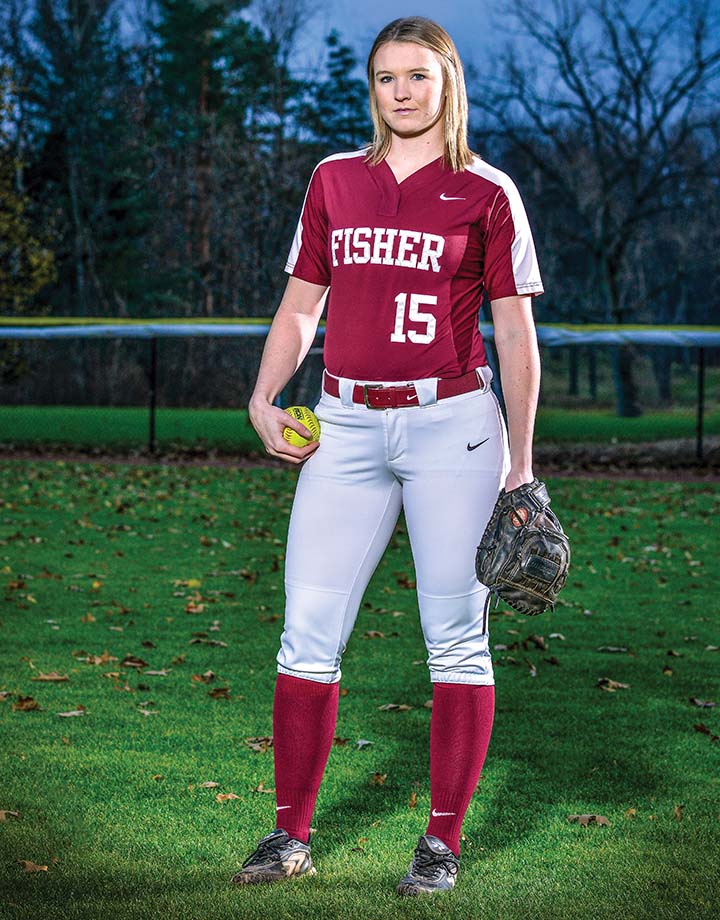 If it weren’t for her oldest sibling, the three-time All-American might be lacing up a pair of ice skates, rather than softball cleats. As young girls, Lindsey and her two older sisters, Sarah and Ashley, followed in their mother’s footsteps and took up skating as a sport. By middle school, the older Thayers decided to give softball a try. Through hard work and talent, both Sarah and Ashley went on to play at the collegiate level, and Lindsey was eager to follow in their footsteps.

“Being the youngest, I wanted to be just like them,” she recalled. “I would go watch their games and saw how it’s a team sport – you can see everyone’s successes through softball. But it’s also very individual. It makes you grow more as a person, and you are really able to see what you’re capable of, while still being part of a team.”

Behind most involved youth – whether their passion is athletics or the arts – there is a fiercely supportive mentor. For Lindsey, it was her father, Randy Thayer.

He said softball has given him the opportunity to bond with his daughters. A catcher himself, he helped coach the girls as they each developed as pitchers.

“I supported their time as figure skaters, mainly transporting them around, but didn’t have a connection to it,” Randy recalled. “For a father with three daughters, softball was a great bond to have, and we’ve pretty much exhausted it.”

As Lindsey’s passion for the sport grew, so did her command of the position. She played travel ball with teams in Malone and Syracuse, and as an eighth grader, the three-sport athlete was selected to play at the varsity level at St. Lawrence Central High School.

It was through travel ball that she caught the attention of Bari Mance ’02, then in her first year as head coach for Fisher’s softball team. Mance had served for 10 seasons as an assistant working with Head Coach and Athletics Hall of Fame inductee Len Maiorani, before taking over the program in summer 2013. In her first two seasons at the helm, Mance guided the Cardinals to an appearance in the Empire 8 Championship game in 2015. She also can be credited with recruiting Thayer, who would help propel the team to even further success.

“Lindsey just had that ‘wow factor’ you look for in a student-athlete, and the moment I watched her pitch and the longer I saw her, I knew she had it,” Mance recalled. “She is a great athlete, but before all of that, she is a great person. That’s what we’re looking for when we recruit. Talent gets you in the door, character gets you on the roster, and that’s what I saw out of her initially.” 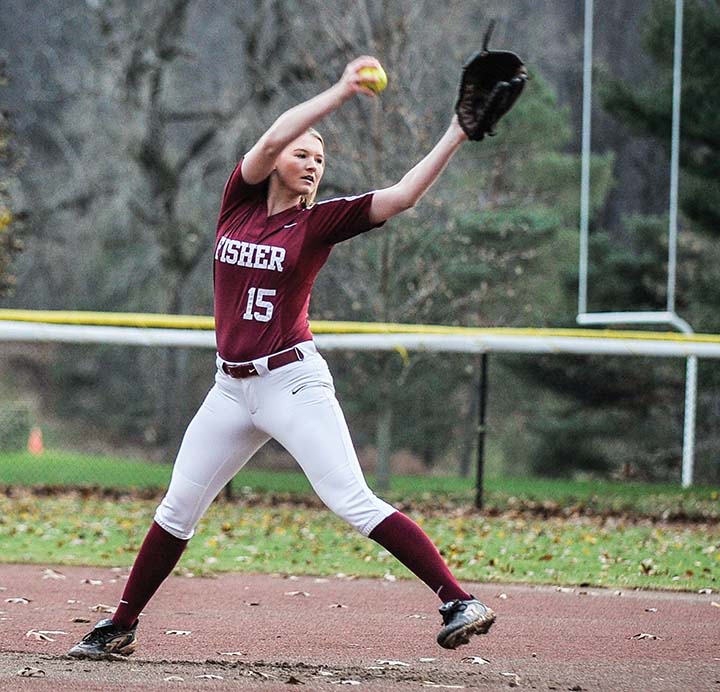 In her three years as a Cardinal, Mance said she has transformed into a commanding, confident pitcher, cool and collected, and most importantly, driven.

“She’s quiet, but demanding – of herself and the team,” Mance explained. “Her expectations are that people are going to put forth their best effort. That’s our expectation of the program and she models it.”

On the mound, Lindsey relies on the trust she has formed with her catchers—Karlie Neale, who graduated in spring 2017, and Mary Claire Grosvenor ’19—to stay in control of the game.

“Karlie was my catcher for the last three years, and we clicked instantly,” she said. “We really fell into a routine as far as pitch selection and never let frustrations affect us. We had a job to do and that’s the number one priority.”

If things on the diamond do get dicey, though, Lindsey said it’s her dad’s voice that always cuts through the noise.

“He helps me keep my head. He’s the only one I can hear from the mound, probably because he’s been yelling at me my whole life,” she joked.

For his part, Randy Thayer agreed that as far as fans go, he’s one of the more active spectators in attendance.

“I’m pretty loud and it’s not hard to hear me. But I try to always be positive and supportive – not just of Lindsey but the whole team,” he said. “If she’s getting flustered she can get through it, but sometimes it’s hearing my voice that settles her down. And that’s a nice bond to have.” 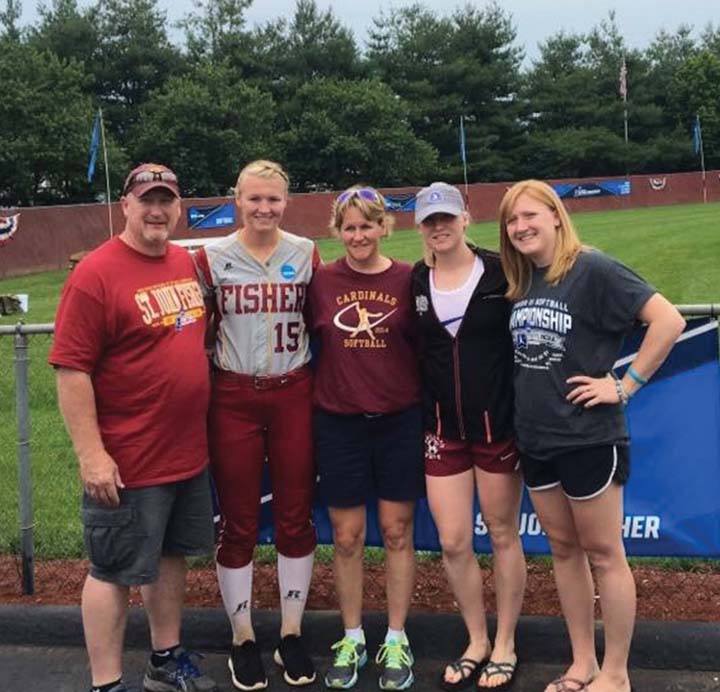 For the Thayers, supporting each other is as natural as swinging a bat. Lindsey’s parents have attended nearly all of her Fisher games, even if it means juggling schedules and driving across New York in a matter of days.

“That’s what we do. As a family, we support each other,” Randy said, recalling a weekend they caught Lindsey’s game in Ithaca on a Friday, traveled to Clarkson University to see another daughter’s commencement ceremony, headed back to Ithaca for a Sunday game, and then went on to Massachusetts on Monday to see their other daughter run in the Boston Marathon.

Watching his daughter play the sport she loves and do it surrounded by good friends and teammates is equally, if not more important than their success on the diamond.

“The softball is a bonus. I’d be proud of her if they were 2-28 or 28-2. She has made a lot of nice friends, and that will carry with her longer in life than the game,” he said.

In addition to her success on the field, Thayer excels in the classroom as well. As a human resources management major, her grade point average throughout the 2016-2017 academic year landed her Scholar-Athlete Honors from the National Fastpitch Coaches Association. She’s currently engaged in an internship with Jamestown Container Companies and upon graduation, hopes to work in human resources for a small company.

Before her time in a Cardinals uniform comes to a close this season, Lindsey, driven by her strong work ethic, will have undoubtedly left a mark on the record books. Among them: breaking the 1,000 strike-out mark while throwing a perfect game during the second half of a home double-header against Alfred University on April 22, 2017.

“One thousand strikeouts is a huge milestone only a handful of people in DIII have achieved, and it came out of her very first perfect game,” Mance said. “She has to be one of the few people in history to do that, and it’s one of the coolest stats that I’ve seen or heard.”

For Lindsey’s part, she had no clue during the game how close she was to breaking the milestone. 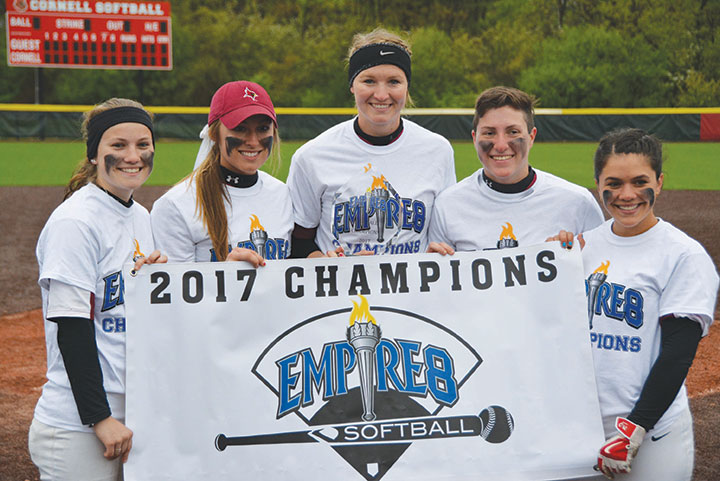 “It was an important game, so I was excited for the win, but I didn’t realize I hit 1,000 until the outfielders came running toward me to hand me the game ball,” she said, noting that their eagerness to count down the milestone speaks to the team’s unique comradery. “We’re always encouraging one another and supporting each other. And on the field, that’s really noticeable.”

Fellow senior and All-American second baseman Katie Mazierski ’18 agreed that part of the team’s success has been the confidence the players have in each other.

“We know that Lindsey holds it down on the mound, and we give her the confidence that we’re going to do our jobs, too,” she said. “It’s that mental preparation, that if the ball comes our way, we’re going to have her back, because she’s had ours the whole game.”

This year, Lindsey is hungry to head back to Nationals and win. But beyond the goal of winning, when she laces her cleats up for the last time as a Fisher athlete, she wants to do it knowing she gave it her all.