Fisher is Ready for #Teddi36

After a year of planning, St. John Fisher College students are ready to take the floor for the 2018 Teddi Dance for Love. A 24-hour dance-a-thon that has raised more than $1 million for Camp Good Days and Special Times, the event will be held from 8 p.m. on Friday, Feb. 16 through 8 p.m. on Saturday, Feb. 17. 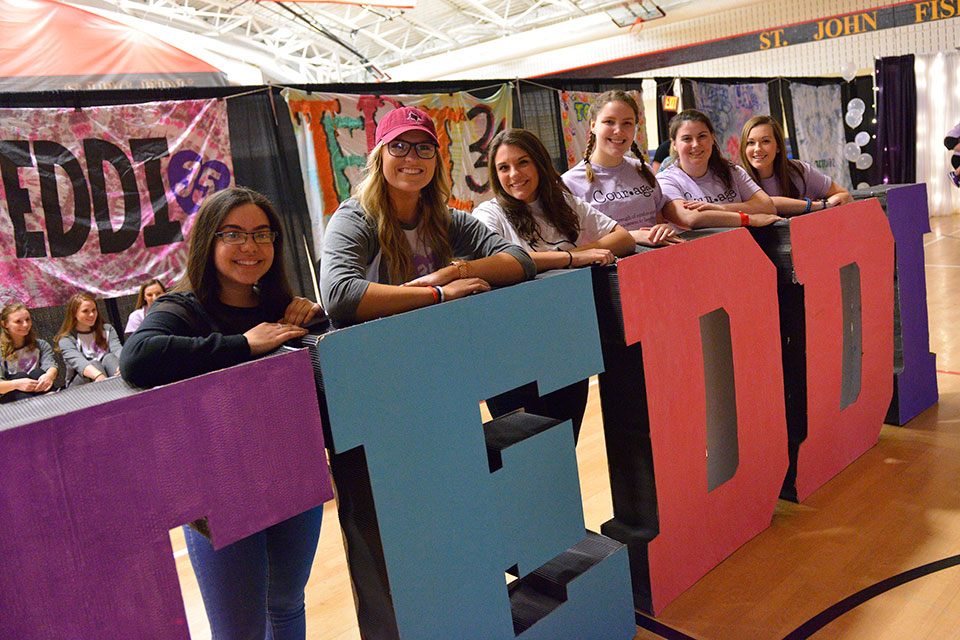 This year’s event—led by chair Emily Jeffries ’18 and vice chair Allison Smith ’19—is made possible thanks to the help of 150 committee members and volunteers. News 8 anchor Mark Gruba will serve as the event’s honorary chair.

“Fisher students have a love for service and making a difference. This dance gives us the opportunity to do just that,” said Jeffries. “The Teddi Dance for Love is the longest standing tradition on campus and something students are very proud to be a part of. It is an extremely moving experience and something that everyone on campus looks forward to participating in.”

More than 500 dancers, including students, alumni, faculty, and staff, will tap their toes and clap their hands to nearly 400 songs. The event also features live performances from collegiate a cappella groups Drastic Measures (Fisher) and the YellowJackets (University of Rochester). During the dance, students donating hair to the Pantene Beautiful Lengths campaign will participate in a before and after reveal.

"One of the highlights of the year for me is the Annual Teddi Dance for Love because when all is said and done, its core narrative is young people helping other young people,” said Gary Mervis, founder of Camp Good Days and Special Times. “As Teddi’s dad, there is no place I would rather be than in Fisher’s Athletic Center with all of the amazing students, faculty, and administrators who are involved.  This year, we are in our 39th year at Camp Good Days, and with the dance in its 36th year, it has been around for almost the entire history of Camp Good Days, which makes it a very special event.”

As is tradition, the Teddi Committee will honor a special camper during the dance-a-thon. This year they will recognize longtime camp advocate Kenneth (Kenny) Bremer, who passed away June 27, 2017. Bremer was first introduced to camp at the age of seven while battling childhood cancer. Over time, he served as a counselor and remained active in the Kazoo fundraiser for many years.  Bremer often said that camp was the only place he could truly be himself, so Teddi organizers knew it was fitting to dedicate this year’s event in his honor.

This year, the committee hopes to raise $75,000 for the Camp; proceeds from the dance specifically support the Teddi Project, which sends a group of children on a week-long trip to the amusement parks in Florida each summer. Jeffries had the opportunity to travel to Florida in November 2017, as a chaperone for three campers.

“The campers are truly inspiring; their strength is what has motivated me to make this dance the best one yet and I can’t wait to dance for 24 hours in their honor,” she said. “My experience in Florida pushed me to raise as much money as possible, as I have seen first-hand the impact this trip has on our campers.”

To register for the dance in advance, visit Teddi’s website (teddi.sjfc.edu). A $50 donation is requested for dancers interested in participating for the full 24 hours; the suggested donation for the mini eight-hour marathon, held from noon to 8 p.m. on Saturday, is $35.

Follow @TeddiDance4Love on Twitter for updates about the event. To donate to the dance, visit the Committee’s First Giving page.