Going to the Chapel

On a sunny day in November 2011, two Fisher students met on the Kearney Hall steps as they filmed a television commercial for the College. Six years later, and just a few feet away from that location, the pair — now Fisher alumni — exchanged wedding vows at the Hermance Family Chapel of St. Basil the Great. 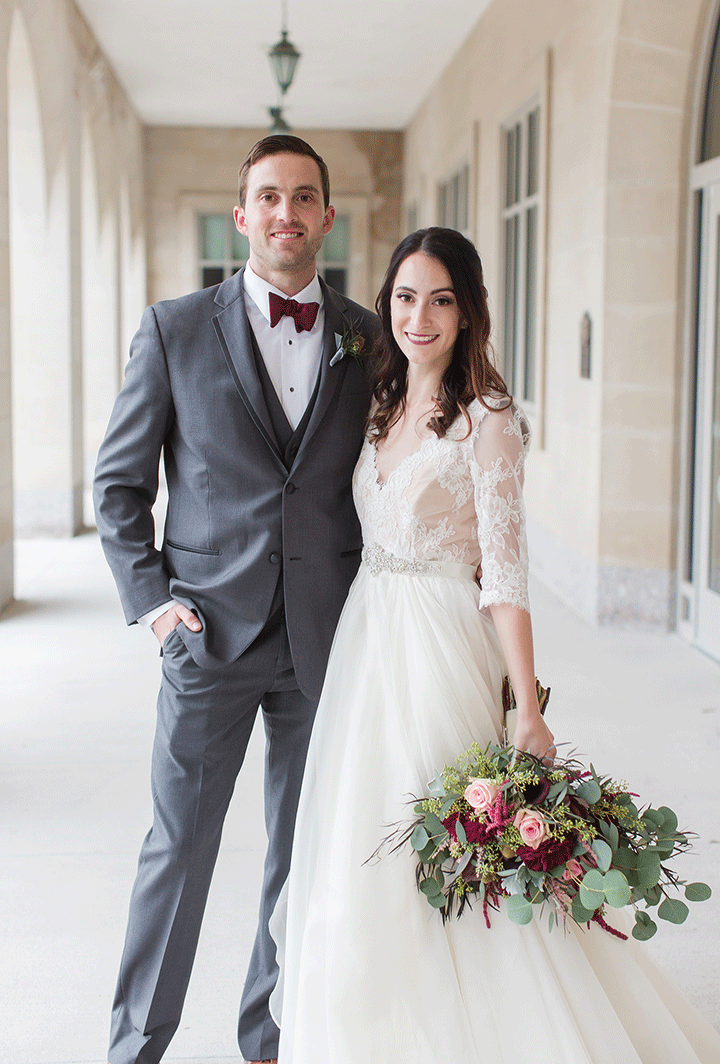 October 28, 2017, was a special day for Caitlin Allen ’15 and Dave Van Gorder ’13, as well as for the College and the celebrant, Rev. Kevin Mannara, C.S.B., director of campus ministry. The date marked the first wedding held in the new Chapel and the first marriage ceremony for the recently ordained Basilian priest.

“St. John Fisher College holds a special place in both of our hearts,” said Dave. “Not only is it the place where we met, but it’s also where we made some of our closest friends and forged some of our fondest memories. It was wonderful and meaningful to return to campus for our wedding.”

The couple did not plan on being the first to say their vows in the new worship space. “My dad was the one who initially told me that Fisher was building a new chapel,” said Caitlin. “[He said,] ‘You and Dave could get married there! What if you were the first?’ But we weren’t even engaged.”

As luck would have it, Dave proposed to Caitlin around the same time as ground was being broken on the new Chapel. “We called Fisher as soon as we could to book our wedding,” Caitlin said.

As the Chapel began to take shape, the pair planned their wedding with the help of Fr. Mannara and Liturgy and Music Coordinator Sarah Mancini-Goebert. During one of the couple’s visits to the Chapel, Mannara was explaining the origin of pieces within the building. Several elements had been procured from local churches that had closed, including the Stations of the Cross from Caitlin's hometown parish in Rochester.

“He mentioned that the Stations had come from St. Salome’s Church, which had been part of my entire life until it closed in 2010,” recalled Caitlin. “I wasn’t able to marry in that church, but still, my childhood church was with me, with my family.”

When the day came, the Allen-VanGorder wedding went off without a hitch. “Everyone at Fisher was wonderful to work with,” said Caitlin. “We were able to get to know Fr. Kevin and it was fun for all of us to go through this together the first time. It was an amazing day.”

“I thought it was neat that our friends from Fisher had the chance to return to campus and hopefully relive some memories,” said Dave. “It was also exciting to have so many of our friends and family who had never visited Fisher come on campus and experience the atmosphere.”

“And, of course, to look out the Chapel windows and see the place where we met, where our relationship began,” Caitlin added. “It was very special.”

The couple currently resides in Rochester. Caitlin is serving as a special education teacher while earning a master’s in school counseling, while Dave is an event coordinator at Monroe Community College and working toward his master’s in information design and technology.