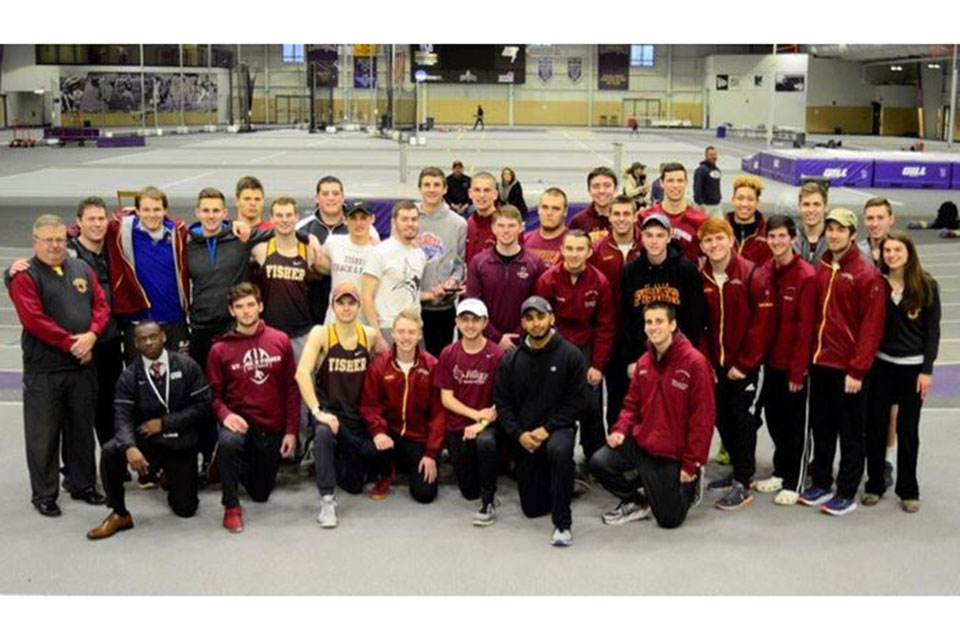 The team earned 161 total points at the championship, which was hosted by Houghton College on Saturday, Feb. 24. The last time Fisher won the Empire 8 crown was in the 2014-15 campaign.

Senior Peter Girardi was named the Empire 8 Track Athlete of the Meet after posting an impressive performance at the championships. Girardi took first place in the 60-meter hurdles event, clocking in at 8.11 seconds. This time sets a new facility, meet, and Fisher record in the respective event.

Eddie Mahana and Kyle Rollins took second and third in the race after posting times of 8.16 and 8.48. Mahana now ranks eighth in the country in the race.

As for the 60-meter dash, Ryan McQuillen set a new school record in the preliminary round. Daniel Norris would go on to break that new school record, crossing the finish line in 7.07 seconds, good for second overall. Norris’ time also qualified him for the Atlantic Regional Meet.

In the 200-meter dash Girardi would pick up the fourth place finish with a 22.70 second time, just one hundredth of a second behind the third place finisher.

The 4X400-meter relay team—Mahana, Behlmaier, Girardi, and Zak Kennedy—crossed the finish line just behind Utica with a time of 3:25.34, qualifying the team for Atlantic Regionals. The distance medley relay team—Owen, Silas Wade, Cody Jerome, and Nick Schug—would take fourth in the event.

In the field events of the day, Mark VanMarter was the star, earning the Empire 8 Field Athlete of the Meet. VanMarter would post a top mark of 7.09 meters in the long jump event. Rollins finished second in the event with a best mark of 6.79 meters. VanMarter took home two second place spots in the triple jump and high jump events. The high jump event gave VanMarter a new personal record, as well as a 26th ranking in the nation.

Freshman Gregory Lenegar gave Fisher the boost they needed in the pole vault event, finishing in third place and matching his personal best with a 4.10 meter jump.

Ross Mathewson posted a performance in the throwing events for the Cardinals, qualifying for the Atlantic Regional Meet in both the shot put and weighted throw event, with tosses of 14.16 and 15.59 meters. Leyton Miner would take the fifth place finish in the shot put event, while Ian Ballard took fourth in the weighted throw.

The Cardinals return to post-season competition on Friday, March 2 and Saturday, March 3, as the team is set to compete in the Atlantic Regional Meet in Ithaca, New York.