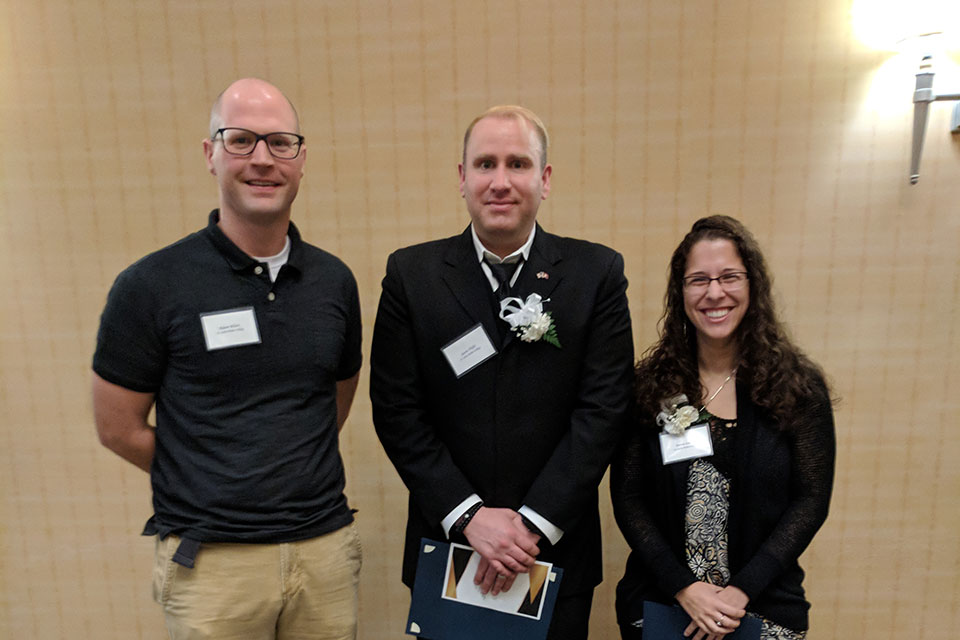 The RACCE Outstanding Adult Student Award honors students who successfully balance academic excellence, service to the community, and the many competing responsibilities and obligations of adult life. Teifel, Wilson, and Zmora, were recognized along with 27 other students.

“Adult students rarely seek out the spotlight; many, in fact, don’t even have the time for it. They excel in their academic and professional work while in service to their families and communities,” said Chris Keffer, coordinator for transfer and adult students at Fisher. “These three Fisher students are as interesting as they are remarkable in where they’ve been, what they’ve done, and what their future holds. I’m grateful to RACCE for shining a spotlight on these and all of our adult students.”

After earning his associate degree in business administration at Monroe Community College, Tiefel transferred to Fisher in fall 2016. An 18-year U.S. Marine Corps veteran, Teifel pursued his bachelor’s degree in management full-time while serving as the very active president of Fisher’s Veterans Club.

Over the past three years, Tiefel earned the designation of Rochester Community Organizer for the U.S. Marine Corps Reserves Toys for Tots Program. Under his leadership, it has become a year-round program, serving more than 17,000 children in six counties. His efforts also earned Fisher’s History Club and Veterans Club the Commanders’ Letter of Appreciation for the 2017 Toys for Tots Campaign.

Next, Tiefel will pursue his MBA and said he looks forward to a civilian life of leading and mentoring young people into becoming productive citizens who realize their full potential.

Wilson earned associate degrees in interior design (2005) and nursing (2014) from Monroe Community College. He works part-time while also enrolled part-time in Fisher’s RN to BS online nursing program. As a certified geriatric resource nurse, Wilson helps educate nurses who care for elders and instituted an ambulation and therapeutic companion program for elders on his unit.

Wilson and his wife have volunteered for orphanages around the world and have three children of their own. He also has served as a volunteer firefighter and EMT in roles that include trainer and mentor to new EMT recruits.

Wilson plans to earn his master’s in nursing and said he hopes to continue his mentorship and teaching in a career as a nurse educator.

Zmora earned her bachelor’s degree in psychology from SUNY Binghamton in 2010. She began pursuit of her bachelor’s in nursing at Fisher in fall 2016 while working full-time as an EMT and part-time on-call as a U.S. military contractor.

She volunteers for Team Rubicon, a veteran-run organization, as part of a national and international disaster response team. She is passionate about human rights, as evidenced by her work as a committee member for the Out of the Darkness Walk, an organization that gives people the courage to open up about their own struggle or loss and a platform to change society’s approach to mental health. She takes an active role in Amnesty International and Students Taking Actions Now Darfur (STAND).

Zmora plans to continue providing health care and service to her community after graduation.