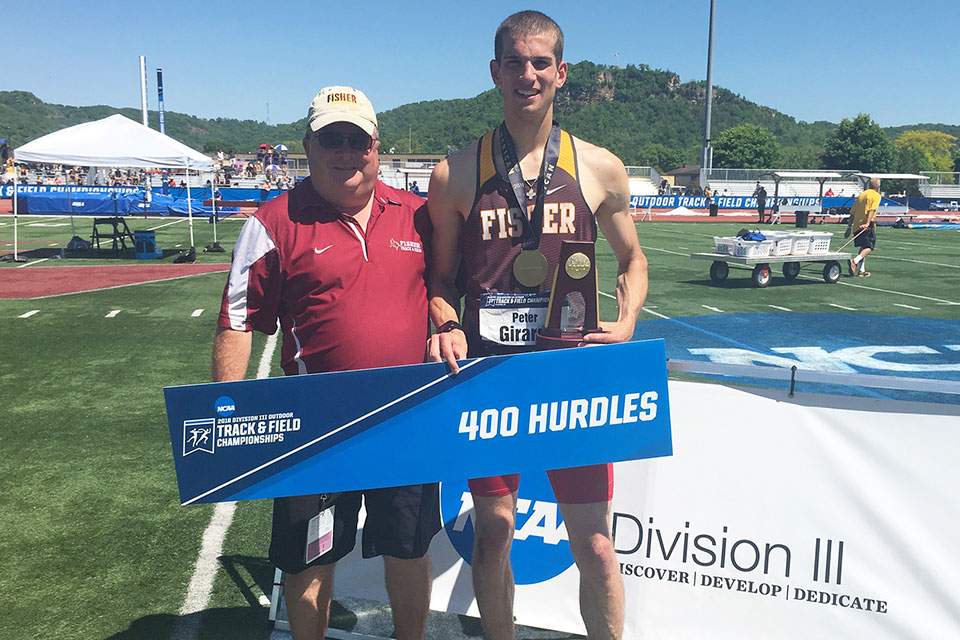 Girardi, who kicked off Day Three of the meet with a sixth place overall finish in the 110-meter hurdles, earned the Cicero, New York native his fifth career All-American finish.

Girardi's bread and butter race, the 400-meter hurdles came next. As a junior, Girardi was the 2017 runner-up in the event. This year, he cruised past the competition and crossed the finish line in 50.50 seconds. His time not only won the National Title and crushed the College’s record, but was recorded as the fifth fastest time in Division III history. Girardi’s time has also qualified him for the U.S. National Meet.

“That race was a testament to how fierce a warrior Peter is,” said St. John Fisher College men's track and field head coach Mike Henchen. “After falling at the finish line in the 110-meter hurdle finals and getting pretty banged up, Pete reached down deep to come back in a little over an hour to capture the National Championship that he has been chasing for three years. A well fought and well deserved National Championship!”

VanMarter would wrap up the events for the Cardinals as the senior jumped a 13.93 best mark in the triple jump competition to finish out day three of the National Championship. At the completion of the day’s events the Cardinals would total 23 points to tie for seventh overall at the national competition.

The 2018 season marked a banner year for the Cardinals’ outdoor track and field season as Fisher ascended to its highest ranking in team history. VanMarter closed out his career with three All-American achievements, notching a third place finish on day one of the national competition, Girardi earned his sixth All-American nod after he nabbed the national title, and Rollins took home his second All-American finish with a fifth place finish in the high jump on day two. Eddie Mahana also had a memorable year as the sophomore finished his season at 15th overall in the 110-meter hurdles.