Two events this spring showcased the academic and co-curricular achievements of students at the Wegmans School of Pharmacy. 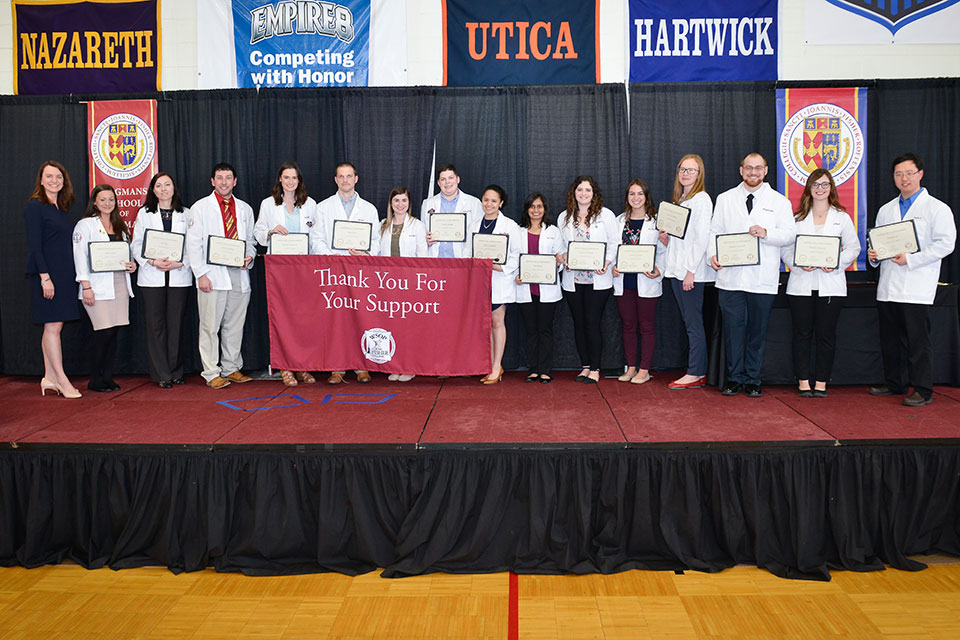 One week later, students, faculty, and staff attended the School’s annual awards ceremony. Recipients of several student and faculty awards and honors were recognized for their hard work and dedication to the pharmacy field.

Jenna Stogsdill was selected as the 2018 Swigart Scholarship recipient, given in memory of Dr. Scott Swigart, founding dean of the School. The scholarship recognizes a student who is in good academic standing, demonstrates leadership abilities, and is involved in activities within the School, community, church, or civic organization, or works full- or part-time.

The Thomas and Eileen Hogenkamp Scholarship was given to Albania Mitchell. The scholarship is given to a full-time first-year student who has worked hard and shown effort in making the world a better place. Recipients are also selected based on a written essay that discusses their pharmacy career goals.

Riley Goho was named the recipient of the inaugural Burcroff Memorial Scholarship, which provides support to a first-year pharmacy student who shows great promise in pharmacy studies.

Matthew Cheung, Emily Kuba, and Sareli Bonilla received awards given by CVS Pharmacy. They were recognized for their academic achievement, interest in community pharmacy practice, and time spent working as an intern or volunteer with an organization that supports underserved populations.

This year’s recipients of the corporate-sponsored Unither Pharmaceuticals Award, a French company with a manufacturing site on Jefferson Road, were Michelle Ubowski and Kristin Reindel. This award is given to third-year students who are in good academic standing overall and who have shown exemplary performance in the pharmaceutical sciences.

Juliette Miller was selected as the Pharmacy Society of Rochester award recipient for her essay responding to the question, “What should a professional society offer you as an incentive to become a member?” 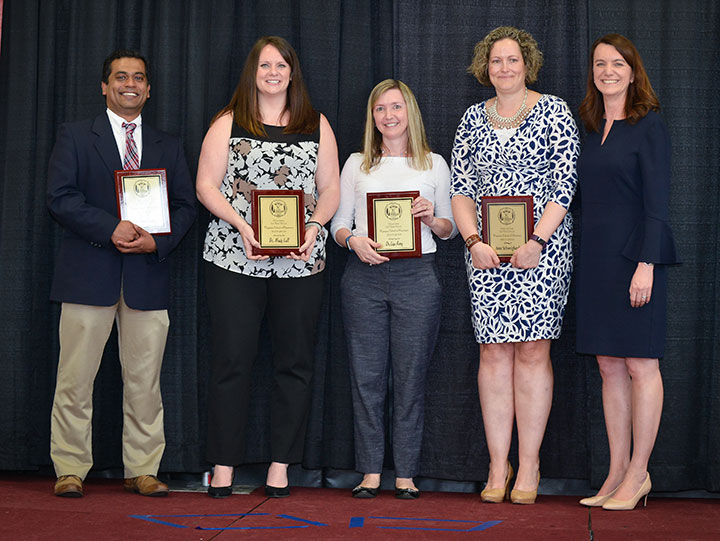 The NACDS Foundation Pharmacy Partners Scholarship honors students who have completed one year of the professional pharmacy program, exhibit strong oral and written communication skills, excels in the area of patient counseling, and is in good academic standing. This year’s winners were Torie Fyles and Lindsey Shoales.

Jacqueline Ball was given the National Council for Prescription Drug Programs (NCPDP) Foundation Scholarship. The NCPDP Foundation funds scholarships (and research projects) that drive better quality health care through the use of standards-based health information technology. Ball was recognized for engaging in activities that promote information technology in pharmacy and patient safety health outcomes.

Thom Maciulewicz and Matthew O’Connell were recognized for their significant achievements at the local and national American Society of Health-System Pharmacists Clinical Skills Competition.

Each year, the American College of Clinical Pharmacy (ACCP) hosts a clinical pharmacy challenge and at the ceremony, Komul Bedi, Mallory Knapp, and Rachel VanDuser were recognized as winners of the local competition. After winning the School’s competition, they competed nationally in written and online rounds covering many different clinical topics.

Bethany Lane received an ACCP Student Travel Award, which offered support for travel to the ACCP Annual Meeting held in Phoenix, Arizona where she presented her scholarly work. Lane was also given the ACCP Outstanding Student Chapter Member Award.

Michelle Ubowski was a recipient of the ACCP Pharmacy Industry Travel Award and the American Foundation for Pharmaceutical Education Gateway to Research Scholarship.

During the ceremony, the School also recognized exceptional faculty members and preceptors.

The 2018 Teachers of the Year, selected by each class, were Dr. Anand Sridhar (P1 class); Dr. Mindy Lull (P2 class); and Dr. Lisa Avery (P3 class). The Faculty Preceptor of the Year Award was given to Dr. Anne Schweighardt.