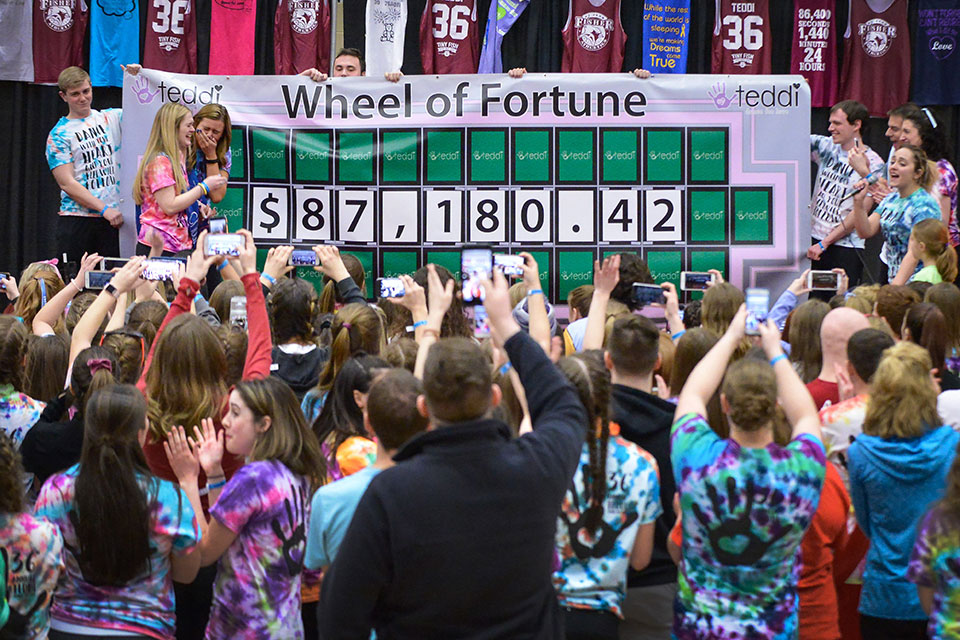 “It was a magical 24 hours and being able to see how much we raised at the end was incredible,” said Emily Jeffries ’18, chair of Teddi. “We can’t thank everyone enough for all that they have done to support this year’s dance. This was a team effort and we couldn’t have raised as much as we did without that support. We hope to see everyone next year at the 37th Annual Teddi Dance for Love!”

Nearly 500 students, alumni, faculty, and staff participated in the 24-hour dance-a-thon, which was made possible with the help of 150 committee members and volunteers led by Jeffries and vice chair Allison Smith ’19. News 8 anchor Mark Gruba served as the honorary chair.

“What you’ve done over the last 24 hours for Camp Good Days is transformative,” said Gruba. “You are a part of something that’s special – it has a legacy here at St. John Fisher and I couldn’t be prouder to have had a small part in it this year. Thank you, congratulations, and job well done.”

During the dance, students were joined by Fisher’s President Dr. Gerard J. Rooney, who was given the Dr. Lou Buttino Faculty/Staff Involvement Award in recognition of his commitment and dedication to Teddi. 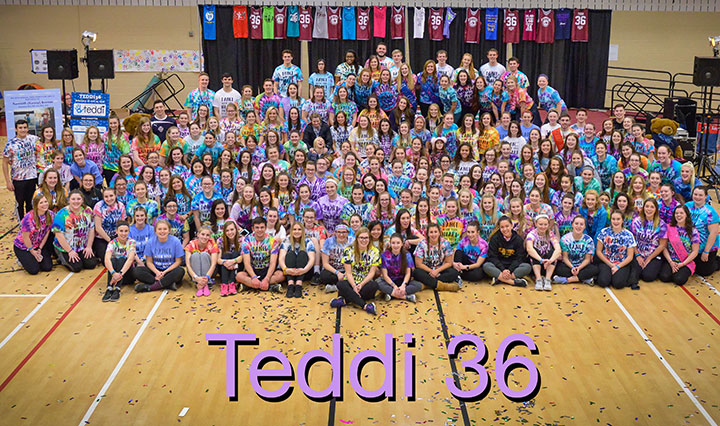 The Teddi Dance for Love is made possible thanks to the help of 150 committee members and volunteers.

“You have joined generations of Fisher graduates who have come before you and now are part of the Teddi tradition. Fisher this year is 70 years old, and this tradition—in its 36th year—has been here for more than half of our history,” Rooney said. “Thank you for recognizing the good that can be accomplished when we put our minds together, our hearts together, and in this instance, our feet together, to celebrate the good that we are.”

The committee also worked with Pantene’s Beautiful Lengths campaign, offering free haircuts and a “before” and “after” reveal on stage for participants willing to donate hair for a good cause. In total, Teddi will donate 2,345 inches of hair to the organization.

One of the more moving moments of Teddi is when the dancing stops and a special camper is honored. This year’s honoree was long-time Camp advocate, Kenneth (Kenny) Bremer, who passed away June 27, 2017. Bremer was first introduced to camp at the age of seven while battling illnesses from infantile osteopetrosis. Over time, he served as a counselor and remained active in the Kazoo fundraiser for many years.

Gary Mervis, founder of Camp Good Days and Special Times, and father of the event’s namesake, Teddi Mervis, also addressed the dancers, recalling one of his favorite quotes, “Whatever you do, make it matter.”

“All of you have made it matter for the hundreds of children who will benefit from what you’ve done,” Mervis told the dancers. “And, you’ve made something very special happen for Teddi—you’ve helped keep her spirit and memory alive.”

The 2019 Teddi Dance for Love is scheduled for February 8-9.