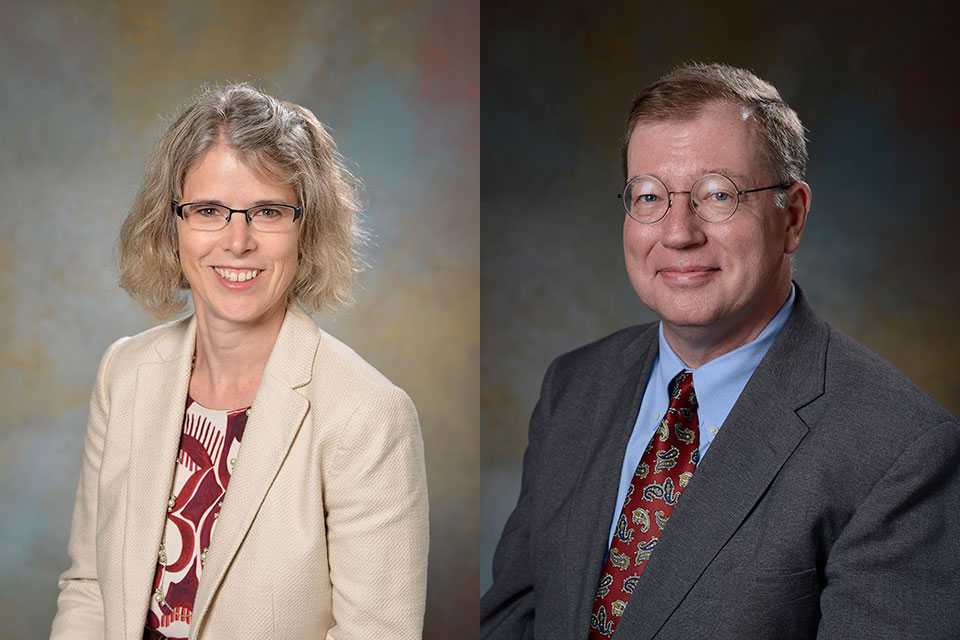 Donahue and Madigan are the third and fourth Fisher employees to be selected for the competitive fellowship program; Drs. Wes Renfro and Sebastien Lazardeux, both of the Political Science Department, were selected in 2016 and 2017, respectively.

The goal of the fellowship program is to create stronger relationships between the University and its partners, provide avenues for collaborative faculty research efforts, and, in the long-term, investigate possible students and faculty exchanges between institutions.

As a fellow, Donahue will spend two weeks in June at the Richmond campus in Rome, Italy, researching ways the American Institute for Foreign Study, which offers international study experiences through Richmond, can adapt the Institute’s Service-Learning and Active Citizenship Course into a discipline-based curriculum focused on a single issue. Donahue will work with the AIFS service partner, Joel Nafuma Refugee Center, Rome’s only day program for refugees, to develop a course that offers students an organized service activity that address the Center’s needs while providing them with an in-depth understanding of the issues faced by migrant and refugee people in Rome, and larger topics of privilege, intercultural competency, and global citizenship, among others.

“I will explore ways students can provide substantive support for the Center and also create a curriculum that will provide students with the knowledge and skills to be effective in their work,” said Donahue, noting that while in Rome she’ll meet with faculty members and administrators at Richmond to learn more about their internship and service-learning offerings.

In addition to her work on the service-learning side, Donahue will also engage in ethnographic research on the refugee population in Rome, focusing on the issues they face and how they are currently supported. This research will allow her to identify impactful service activities at the Center.

Donahue anticipates that the course, which would be a three-week experience, would be offered by AIFS at Richmond in summer 2019.

Madigan will also travel to Rome to examine the works of 20th century Italian aristocrat Vilfredo Pareto, well-known for his writings on economics, mathematics, sociology, philosophy, and political theory, among other topics. Madigan will focus his research efforts on Pareto’s idea of the “Circulation of the Elites,” which argues that revolutions led by the masses would lead to a new set of power elites in control.

“Pareto was critical of social reformers who thought that the masses could somehow be empowered and could overthrow existing power elites,” Madigan said, noting that the Italian economist was a controversial figure in his time because of his strong criticism of democracy. “I will examine his works and explore its relevance as a possible explanatory tool for understanding present-day populist movements.”

While in Rome, Madigan will have the opportunity to meet with Italian scholars to discuss Pareto’s theories and their relevance to contemporary society. He’ll also deliver a presentation on his research, providing a chance for feedback before finalizing it for submission for publication.