This semester, Dr. Anna Ratka and Dr. Todd Camenisch joined the faculty at the Wegmans School of Pharmacy at St. John Fisher College. Ratka will serve as the associate dean for academic affairs and Camenisch has been appointed chair of the Department of Pharmaceutical Sciences. 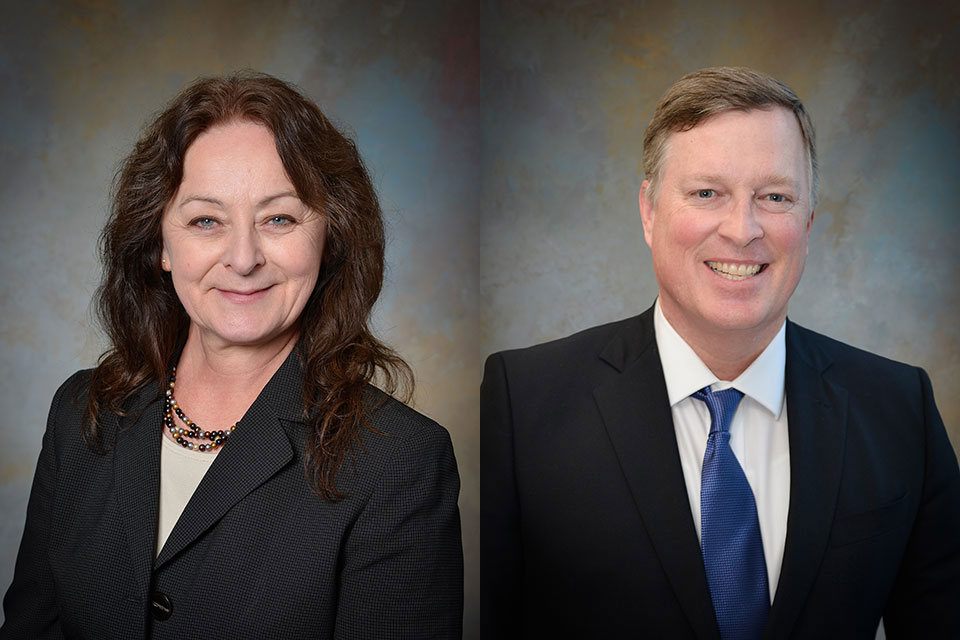 “Both Drs. Ratka and Camenisch are wonderful additions to the School of Pharmacy family,” said Dr. Christine Birnie, dean of the School. “Their expertise in both pharmacy education and pharmaceutical research provide tremendous value to our administrative team and the faculty.”

As a certified pain educator, Ratka’s research interests include neuropharmacology, neuroscience, and pain. She has authored more than 100 peer-reviewed publications and presentations throughout her career. She also provided volunteer outreach to underserved communities and participated in medical mission projects in South America. Ratka is a graduate of the American Association of Colleges of Pharmacy Academic Leadership Fellows Program and has regularly served in numerous professional organizations.

“I am excited about this new position because of the opportunities to engage in the ongoing development of innovations in the pharmacy program at the Wegmans School of Pharmacy,” Ratka said.

During his 15 year career at the University of Arizona, he was researcher and teacher in the Department of Pharmacology and Toxicology at the College of Pharmacy, the Department of Molecular and Cellular Biology at the Steele Children’s Research Center, and the Bio5 Institute. He instructed undergraduates, graduate, and professional students creating new classes for each level of student. His research program centers upon cardiovascular development and disease as well as oncology.

In his role as director of economic development and partnerships, Camenisch founded a biotech startup company, Arizona Cancer Therapeutics LLC. He also facilitated the spin-out of SinfoniaRx, a public-private partnership focused on medication management. Most recently, he served as an advisor to EnduRX, providing consultation on novel cancer compound studies.

Throughout his career, he has been the recipient of federal and foundation research and training grants, including several from the National Institutes of Health, and has published more than 50 articles in peer-reviewed journals. He is an active member of several professional organizations, including the Basic Cardiovascular Science Council through the American Heart Association, the North American Vascular Biology Organization, and the Society for Toxicology.

“I appreciate the opportunity to enhance the scholarly and research components of the program to provide more authentic learning experiences for students,” he said. “Such training is vital for graduates to be successful in an ever-changing and highly impactful career in pharmacy and pharmaceutical sciences.”

In addition to the two new hires, Dr. Keith DelMonte was appointed interim chair of the Department of Pharmacy Practice and Administration. DelMonte joined the School in 2010 as the director of experiential education and has been actively engaged with its external clinical partners over the years and oversees its extensive experiential education program.