This coming July 13 will mark a big date in Fisher alumni history: the 45th annual Whackers and Hackers Golf Tournament.

The tournament was started in 1973 as a way for Fisher alumni to come together and share a fun day on the golf course. In its early years, only a handful of men hit the links. But by its third anniversary, the event boasted more than 100 golfers, and in 1977, more than 200.

The first few tournaments were played at various courses, including Chili Country Club, Lakeshore Golf Center, and other locations before settling in over the past few decades in Penfield at the Shadows courses. At its height, the tournament filled both Shadow Lake and Shadow Pines.

What has set Whackers and Hackers apart from the rest was its fun take on the links. It attracted both scratch golfers and the once-a-year set, and honored both. Standard tournament prizes were given, such as best foursome and longest drive, but the crowd favorite was always the annual Hacker Award, given to the player and foursome with the highest score. 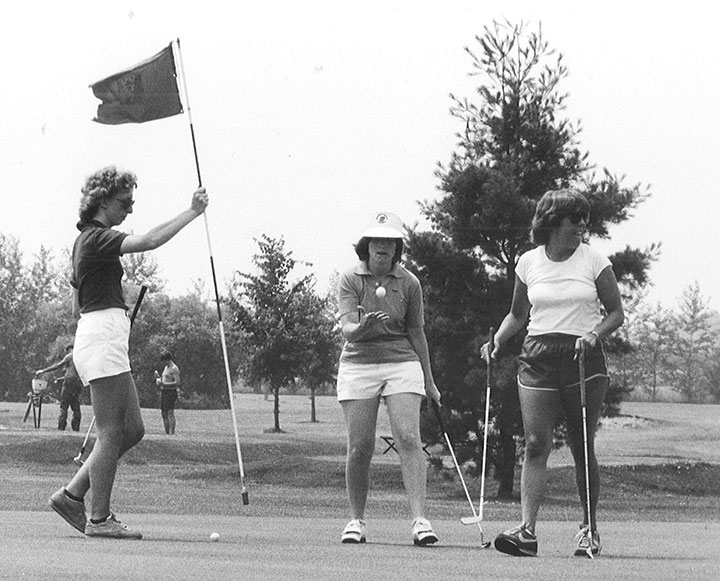 Familiar faces returned each year, with a handful of alumni proud to boast that they have played golf in each of the 44 previous tournaments. Many who didn’t golf but wanted to be part of the day have volunteered for decades.

At each tournament, all decades of Fisher alumni have been represented, from the Pioneer Classes of the 1950s to more recent graduates.

This year, Whackers and Hackers will take its final trip down the fairway. As the storied tournament tees up and signs off, we decided to pay a visit to the College archives and take a trip down memory lane.

For questions regarding the 2018 Whackers and Hackers Tournament to be held on Friday, July 13, at Ravenwood Golf Club in Victor, New York, contact the Office of Institutional Advancement at (585) 385-5292.