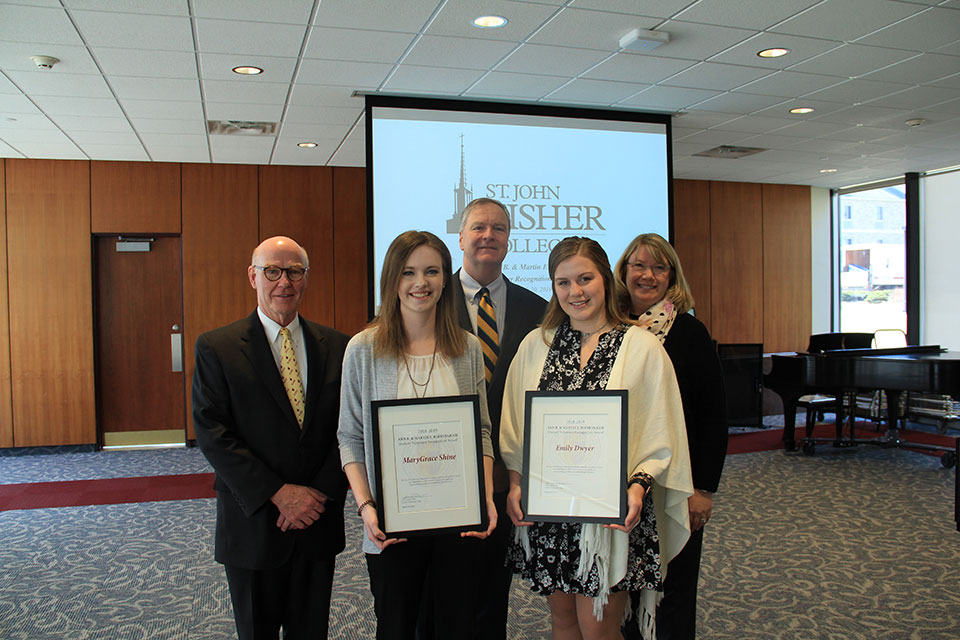 The Ann B. and Martin F. Birmingham Student Volunteer Recognition Award is named for the parents of Martin K. Birmingham, a long-time member of the Board of Trustees.  Through their personal examples of volunteerism, they embodied one of the basic tenets of the College’s educational philosophy: service to others. The Birmingham Award is given annually to a student who demonstrates excellence as a volunteer either on campus or in the community. Student winners receive $5,000 in scholarship assistance and a $1,000 honorarium.

“Since my parents established the award in 1990, 40 students have been recognized and rewarded for their charitable service to others. It means so much to our family that Fisher continues to honor my parents and recognize wonderful students through this tradition,” said Birmingham.

This year’s winners carry an impressive résumé of service to Fisher and the greater community.

Originally from Chateauguay, New York, Dwyer came to Fisher anxious for the service opportunities available here, many of which she has found through her involvement with the Office of Campus Ministry.  She has participated in Service Saturdays at the beginning of each fall semester at a variety of sites in the Rochester community.  As well, she has helped to organize pop-up volunteer events after Sunday Mass at the Chapel, making hygiene kits for the homeless or packaging goods and cards for our troops overseas.  Dwyer has also volunteered with Webster Comfort Care, Owen’s House Crisis Nursery, and the St. Joseph’s House of Hospitality.

Her most memorable service project at Fisher so far has been the Campus Ministry service trip, which took students to Houston, Texas last year shortly after Hurricane Harvey.  While there, they connected with one family whose house sustained severe damage and needed renovations and repairs.  In addition, they raised money for the family in an effort to help them rebuild their lives.  Dwyer also had the opportunity to serve at a soup kitchen, and went to the Catholic Worker House to learn more about people who give of themselves to live with and serve people who need it most.

Shine, a peer minister on campus, also traveled to Houston in 2018 on the Spring Break service trip and has participated in creating trick-or-treat bags for St. Ambrose Academy, the Letters for Veterans project, a hat, glove, and sock drive for the House of Mercy. She is also a regular participant in the Office of Campus Ministry’s weekly trip to St. Joseph’s House of Hospitality.

In her role as a peer minister, Shine helps to identify service partners and communicates with them to coordinate projects. She also oversees the Fisher Food Pantry. If that is not enough, the biology major spends 40 to 60 hours per week as an EMT for Perinton Ambulance.