Fisher students seek out opportunities to serve and lead both on-campus and in the greater Rochester community. Hear from several students about why service is important to them. 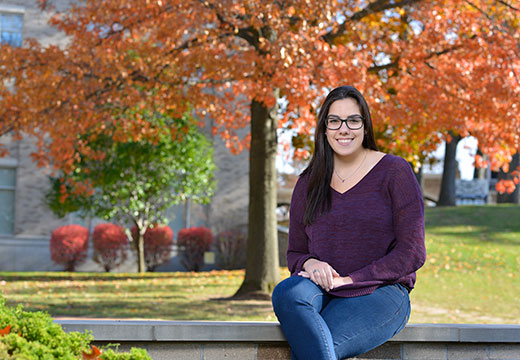 For Lindsey Michaud ’17, losing her grandfather to cancer during her senior year of high school inspired her to help others who have been touched by the disease.

“I wanted to do something for his legacy, do something that would make him proud,” said Lindsey, who was instinctually drawn to Fisher’s Colleges Against Cancer (CAC) club.

Through CAC, she took a leadership role with the College’s annual Relay for Life, serving as co-president for two years, and as a senior advisor in 2017. In Lindsey’s four years with CAC, the group raised more than $86,000 through Relay.

A nursing graduate, Lindsey’s education allowed her to put that desire into action. Shadowing nurses in the oncology unit at Unity Hospital, and working with hospice patients in the Webster Comfort Care Home through a service-learning course, her community service and education paired together to prepare her for a career with the Wilmot Cancer Center. She now works on the sixth floor of the center, in the bone marrow transplant unit.

“The amount of patient and family interaction nurses have on those units puts us in the position to make a difference every day in someone’s life,” said Lindsey. “You get very close and you get to know your patients well. It reminded me of my family members who had cancer and the nurses that were there for us. Nurses are the people on the forefront with the patient and the family.” 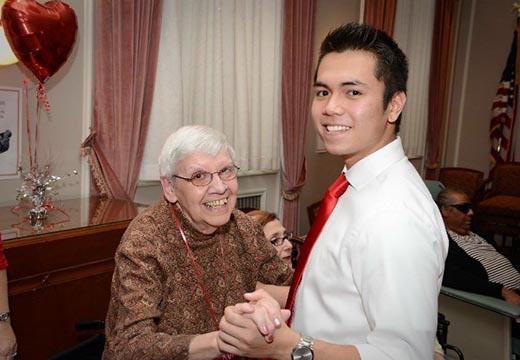 First Generation Scholar James Nguyen poses with a resident of The Friendly Home during the annual Sweetheart Ball.

Rochester native James Nguyen volunteers because he says it gives him a sense of purpose. Giving back and impacting the community where he was born and raised is one of the reasons that volunteerism and service are such a big part of his life. Whether in large ways or small, James says that it truly doesn’t matter how he is able to help people. Rather, if he is able to positively affect the life of at least one person, it makes everything worth the effort.

The legal studies and political science major spreads his love of volunteering throughout campus in a variety of ways. He is the president of Students Who Advocate Volunteering and also serves as a Teddi Committee Hug Team member. One of his service sites includes the American Red Cross Youth Leadership Program. When he is not busy volunteering, he participates in the College’s Asian Student Union and had previously served as a resident assistant in Keough Hall.

James says that the scholarship has not only provided him the opportunity to attend Fisher, but has afforded him the chance to grow as a student.

"Not only have I met great people through this program, but along the way, I've learned important values and lessons I will keep with me when I graduate. I take extreme pride in being a First Generation scholar as I've learned the value and possibility in becoming a leader among my peers," he said. "Everyone starts somewhere on their journey towards greatness. For me, it started with the First Generation Scholarship." 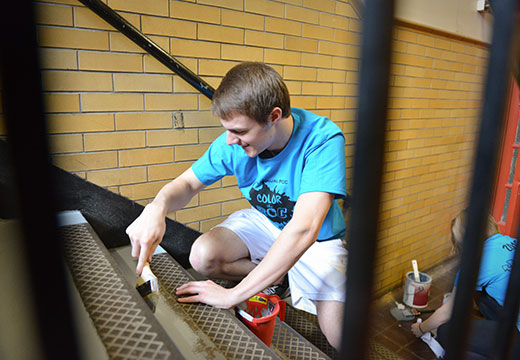 “There are a lot of things college students can spend their time doing, but if you can put your efforts together for a cause, you can make a big impact in the community,” said Ryan, who studies accounting and economics at Fisher. Ryan noted that his participation in student activities, including sitting on the finance committee with the Teddi Dance for Love, and serving as an executive board member for Students Who Advocate Volunteering (SWAV), has helped enhanced his studies.

His efforts have earned him three Presidential Awards for Service, and this spring, Ryan was elected as one of 10 recipients of the 2017 Independent Sector Student Community Service Award and a $500 H.D. Paley Scholarship from the Commission on Independent College and Universities (cIcu).

And, while his dedication to service may seem extraordinary, to Ryan it’s second nature.

“It’s part of the culture at Fisher and SWAV,” he said. “It’s about the people you are impacting. That’s why we strive to complete service in the Rochester community.” 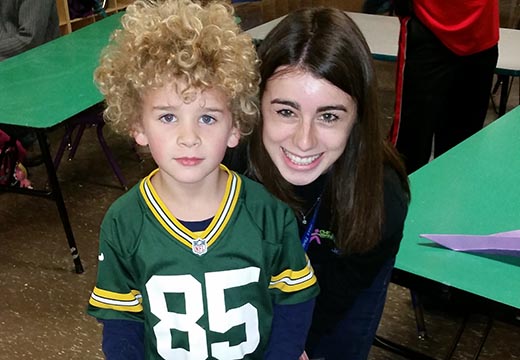 Alexa Zappia poses with a student at the Gesher After-school Program at the Jewish Community Center of Greater Rochester.

Beginning at a young age, Alexa Zappia's mother instilled in her and her brother the idea that giving back to their community was important. Because of that notion, Alexa says she firmly believes that in life we encounter life-changing moments which define our life's purpose. For her, that moment happened when she was just 12 years old after losing her temple cantor and someone she calls her life mentor in a plane crash. Following the tragedy, Alexa witnessed her congregation struggling, a sign that she needed to do her part to pick them up and help get the congregation back on its feet.

Over 1,000 service hours and seven years later, the Williamsville native and inclusive childhood education major feels that she has done her part to rebuild a struggling community, and has extended her service to the Rochester and Fisher communities.

Her service sites include the Congregation Shir Shalom in Williamsville and the Louis S. Wolk Jewish Community Center of Greater Rochester Gesher After-school Program. On campus, she is a member of the Student Activities Board, serves as the Teacher Education Student Association (TESA) secretary, a Students Who Advocate Volunteering committee member, and sits on the Service Scholar Application Committee, among other involvement.

Her goal is to leave a positive impact on the community and change many lives in the process. In her eyes, service and change starts with one person, and naturally grows.

"In high school, community service is a requirement. In college, it is a choice. St. John Fisher College is enabling me to build my foundation in changing the lives of others. This scholarship has supported me with what may seem like a large undertaking. However, I am now on my pathway of making my dreams and aspirations a reality, and for that, I am forever grateful," she said. 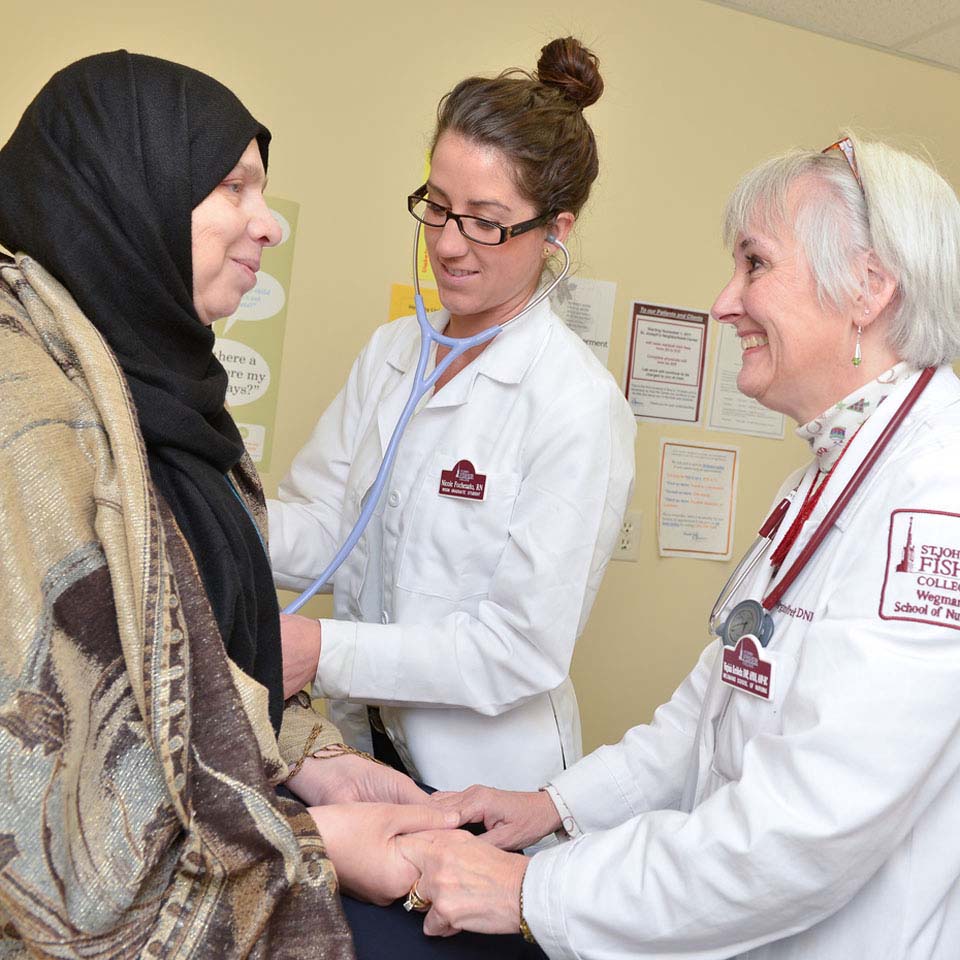