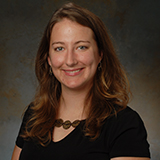 My teaching focus is at the sophomore level in plant and microbiology. I also enjoy teaching an elective in medical ethnobotany and a non-majors course on fungi. My training is in plant pathology and my graduate work focused on induction of defense response pathways in vegetables. I'm currently working on pedagogical projects that investigate student engagement, critical thinking, and misconceptions.

My research program investigates interactions between plants, microbes and the environment. One focus is on using plants and microbes to remediate lead-contaminated soils in Rochester. I also have projects investigating prevalence of antibiotic resistance bacteria in local lakes and rivers.

Lead poisoning is a global and local concern, causing serious health problems in children and adults. Unfortunately, residents of older urban areas, such as the Highland Park neighborhood of Rochester, are at risk for environmental lead exposure from soil contamination by lead-based paint and leaded gasoline. It is crucial to educate residents on both safe and high-lead accumulating plants typically grown in home gardens. While the optimal solution would be to eradicate lead from contaminated soil, this option is not feasible. Heavy metals cannot be destroyed; modifying lead to a less toxic substance or immobilizing it in a non-absorbable form are the best possible solutions (Gadd 2000, Valls de Lorenzo 2002, Wu et al. 2006). Certain plants, bacteria and fungi have great potential to remediate lead in soil, though more research is needed to before this approach can be adopted.

This project is a collaboration with colleagues in the Chemistry Department at St. John Fisher College (Drs. Chichester and Kimaru) and several community partners. The aim of this work is three-fold: (1) to investigate lead accumulation in garden vegetables, (2) disseminate the results to the Rochester community and (3) explore bioremediation methods to reduce soil-lead levels.

Currently, students are investigating the effects of variable soil lead concentrations (high, low, no lead) on germination and growth of locally grown vegetables. Ethiopian mustard, a known hyperacculator of lead, is being studied for phytoremediation potential. The effects of various lead concentrations on the physiology of the mustard and amount of lead removed from the soil is being investigated. Another focus of the research involves collecting lead-contaminated soil from the Rochester area for assessment of microbial content. Bacteria present in the root zone and surrounding areas will be cultured and characterized. Promising strains will be investigated for lead remediation and plant growth-promoting potential.