In this section
Home » About » President's Office

Dr. Gerard J. Rooney took office in July 2015 as the seventh president of St. John Fisher University. Prior to his presidential appointment, he served as executive vice president for enrollment, advancement, and planning.

Throughout his tenure as president, he has made an indelible student, academic, community, and institution-wide impact through a variety of initiatives guided by Fisher's Strategic Plan: “Renewing our purpose. Broadening our impact.”

Using a student-centered approach, President Rooney has spearheaded several efforts to create transformative experiences leading to increased levels of student engagement and success. In 2018, the University launched The Fisher Edge, an innovative program offering students an integrated approach to academic advising and career planning and exploration. The same year, the Center for Career and Academic Planning (CCAP) was established. CCAP advisors provide cohesive advising to help students plan to excel in their major, explore careers, and develop professional skills through experience-based learning. Fisher graduates consistently report favorably on outcomes following their graduation, on everything from satisfaction with their Fisher education and successful career placement. 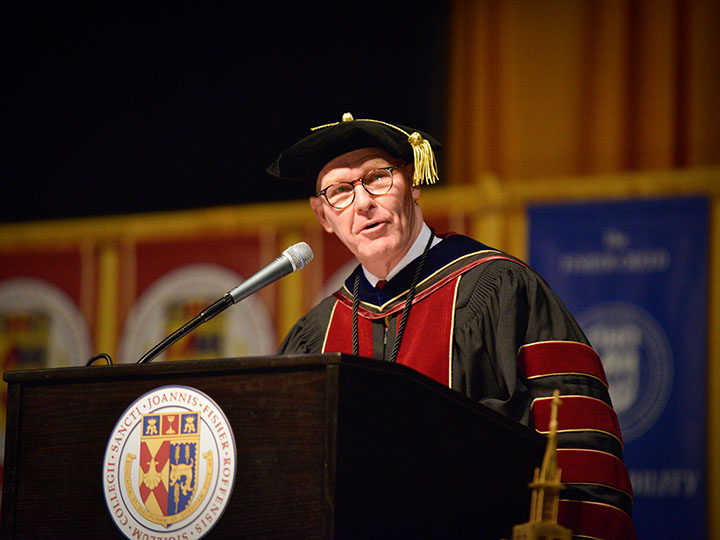 In 2016, he launched the Executive Intern program, designed for juniors and seniors who have an interest in higher education and in understanding executive leadership in a collegiate setting. He also hosts the President’s Student Advisory Board, comprised of nearly a dozen students from each class and across a variety of disciplines, meeting with them each semester for informal discussions about their own personal experiences and other topics of interest to the student body. In an effort to meet new first-year and transfer students and offer them a home away from home, President and Mrs. Rooney started Pizza and Puzzles, a regular event that takes place throughout the academic year at the President’s Residence.

Under President Rooney’s leadership, Fisher has added a variety of new undergraduate and graduate offerings, including the clinically-oriented hybrid Pharm.D. pathway in the Wegmans School of Pharmacy – the first fully online Pharm.D. program in New York State. His vision for developing institutes and academic centers that build on institutional core competencies and broaden thought leadership beyond campus led to the creation of the Institute for Civic and Community Engagement, the Family Business Initiative at the School of Business, the Golisano Institute for Developmental Disability Nursing housed in the Wegmans School of Nursing, the first institute of its kind, and the recently established DePeters Family Center for Innovation and Teaching Excellence.

In early 2019, he convened the Presidential Task Force on Diversity, Equity, and Inclusion to concentrate University efforts on building a more diverse and inclusive community that affords a sense of welcome and belonging for all. A key part of this effort was the introduction of the Fisher Urban Scholars Program.

"I am committed to carrying the vision of our founders forward, to advance the mission of the University, and to continue its good work for its students, its alumni, and for the people around us. I will seek opportunities to make the Fisher educational experience transformational for all of our students." ~ Dr. Rooney

President Rooney has also launched Fisher Forward: The Campaign for St. John Fisher University, the largest fundraising campaign in the history of the institution, with a goal of $75 million. The campaign is centered on four priority areas: enhancing Fisher’s campus, shaping the student experience, creating immediate impact, and securing Fisher’s future.

Earlier in his career at the University, he launched Fisher’s College Bound program, a weeklong residential program designed to help low-income, first-generation high school students navigate the college search and selection process. Since its inception, the College Bound Program has served more than 400 students, of which approximately 95 percent planned to attend college. A first-generation student himself, President Rooney remains committed to maintaining college access for this population of students.

During his presidency, President Rooney has been honored with the Executive of the Year Award from the Rochester Chapter of the Public Relations Society of America, Cardinal Awards Staff Member of the Year, and the Dr. Lou Buttino Faculty and Staff Involvement Award from the Teddi Dance for Love Committee, and the University at Buffalo’s Graduate School of Education’s 2020 Distinguished Alumni Award.

In the community, he is a member of the board of the Greater Rochester Chamber of Commerce and secretary of the executive committee for Goodwill of the Finger Lakes. He is also chair of the Presidents Council of the Empire 8 Athletic Conference. In addition, he serves as a peer evaluator for the Middle States Commission on Higher Education, and previously was a member of the Middle States Regional Council of the College Board.

President Rooney and his wife, Susan, reside in Pittsford and have four children, two of whom are alumni of Fisher.