Growney Stadium exploded with energy as 10 honorary coaches and cheerleaders—children served by Camp Good Days and Special Times—walked hand-in-hand onto the field with members of the Cardinals and Golden Eagles football and cheer teams. 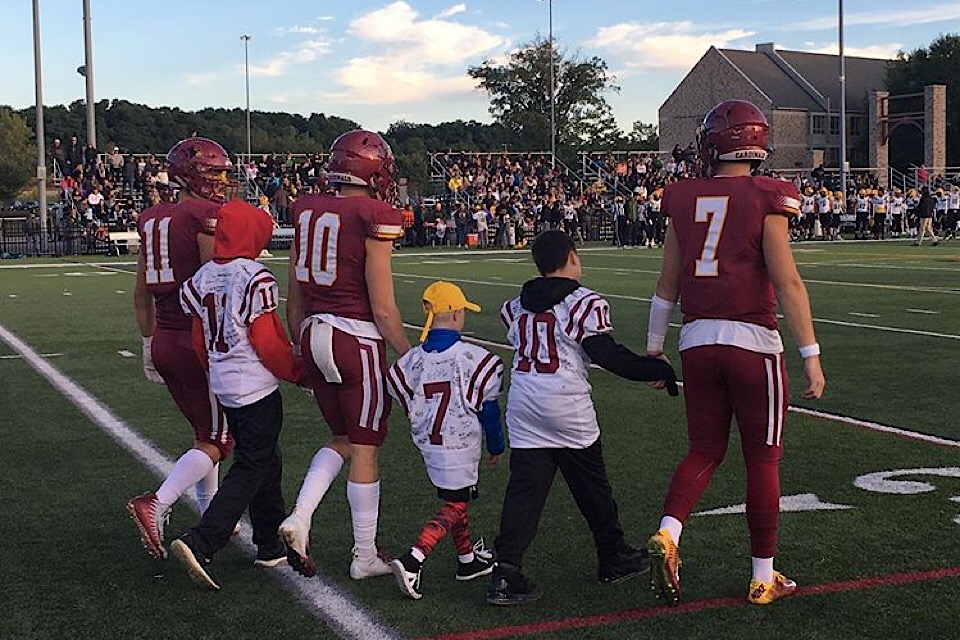 A 15-year tradition, the Courage Bowl, played between Fisher and the College at Brockport, has been coined, “more than just a game.” And indeed it is.

While the Cardinal fell to the Golden Eagles 17-0, the more than 5,000 fans inside Growney Stadium rallied behind the campers on both sidelines. In addition to providing campers with an up-close, on-field game day experience, proceeds from the Courage Bowl benefit Camp Good Days and Special Times.

Camp Good Days is a not-for-profit, volunteer-based organization providing children facing cancer or other childhood diseases with the opportunity to have a shared residential camping experience and a sense of normalcy. With the support from Courage Bowl and other events, Camp Good Days has reached more than 45,000 children from 22 states and 29 counties. All programs are free of charge to campers and their families.

Festivities for the game kicked off Thursday with the annual Courage Bowl Luncheon, bringing together Fisher and Brockport players, coaches, and cheerleaders along with local dignitaries.

Gerry Rooney, president of St. John Fisher College, and Dr. Heidi Macpherson, president of The College at Brockport, have had the opportunity to experience first-hand the magic of Camp, by spending time there in the past.

There were special times on full display Saturday as the kids and players high-fived on the sidelines and cheerleaders yelled side-by-side with their honorary squad members.

During the annual luncheon, which takes place in the days leading up to the big game, Gary Mervis, founder of Camp Good Days, presented the 2019 Father Joe Lanzalaco Courage Award to Samantha Gehl. Gehl is a senior nursing major at Fisher, a member of the women’s track and field team, and a cancer survivor. During her sophomore year of high school, her running career was put on hold when osteosarcoma was found on her shin. After several rounds of chemo and three surgeries, she lost her leg to cancer, but Gehl looks at it from a positive perspective, knowing a prosthetic leg would give her the opportunity to run again. In the spring of her freshman year at Fisher, she ran in her first collegiate race. Gehl exemplifies the qualities of the award, showing courage, strength, and determination to all of the children and families served by Camp Good Days.

The honorary coaches and cheerleaders for the game included:

Craig Winter, a 9 year old who,like any other kid,loves to dance, play tennis, and run a lemonade stand. He has taken part in many Camp Good Days activities, and told his mom, “Anytime Camp Good Days invites me to anything, sign me up! I love everything they do!”

Brody Hines is currently a 9th grader who is competing on the varsity cross country team. He learned about Camp Good Days while in the hospital in his first round of treatment five years ago, and has attended camp all summers but one since.

Ryleigh Farrel loves math and science in school and hopes to be a veterinarian when she grows up. After school you can find her in the gym practicing with her cheerleading team. Camp Good Days has been her biggest cheerleader since she was old enough to join four years ago.

Kymani Huntley is 8 years old and loves to sing, it is the first thing you can hear her doing in the morning. Attending Camp Good Days has allowed her to meet other kids with the same type of cancer when attending the overnight programs. As of August 14, she is cancer free and rang the bell at Upstate Children’s Hospital.

Alex Brown is 12 years old and enjoys playing baseball. He hit a walk off single sending his little league team to victory in their championship game. Camp Good Days has shown him that nobody fights alone and that he is not the only one who has fought cancer. He looks forward to camp each year to connect with his friends once again.

Roman Statt loves to play every sport he can, along with videos like Minecraft to create his own new worlds. He is now considered cured from his rare form of leukemia after five years in remission. He and his brother attend Junior Good Days, where he has made friends that will last a lifetime.

Lucas Lowe, now in 10th grade, is attending full days of school for the first time since his diagnosis in second grade. He is loving life and has a great love for Camp Good Days and the Golden Eagles of Brockport that have made him a part of their team.

Emma Golden is an 11 year old cancer survivor who loves to play soccer, cheerlead, and is a blooming fashionista. She has participated in Camp Good Days events, day camp, and overnight camp for several summers. She is one tough cookie and was thrilled to be one of Camp Good Days Courage Bowl Cheerleaders.

Erika Berry is 11 years old, cancer free, and is thrilled to be a survivor. The memories she has made over the years at camp will last a lifetime. Her family is forever grateful for all that Camp Good Days has provided.