In its relatively short history, St. John Fisher College has grown from the “College on the Hill” to a nationally recognized institution, an anchor in the community, and a place where students experience a transformative education. 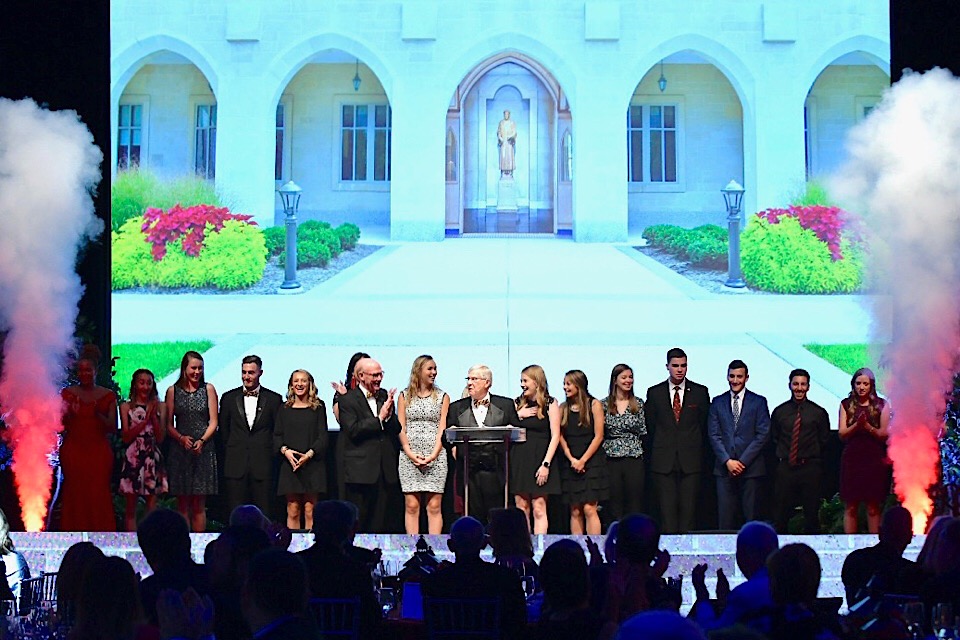 To build on its storied traditions and secure its future, the College will move into the public phase of Fisher Forward, the largest fundraising campaign in its history, aiming to raise $75 million to foster strategic investment in growth, innovation, and excellence.

President Gerard J. Rooney, joined by campaign co-chair and former Board of Trustees Chairman Vic Salerno ’66, announced plans for the campaign during a celebratory event held on Thursday, Sept. 19.

“The College has been fortunate to benefit from inspirational founders followed by committed believers throughout its history. Now we look to engage visionary partners to join us in broadening our impact. Through Fisher Forward, we will provide innovative high impact educational opportunities for our students on a broader scale, create new avenues for our faculty to engage in scholarly research, and generate additional resources to support initiatives that build on our strengths and elevate our profile,” said Rooney. “Philanthropy transforms an institution, and enhances it for those who follow.”

Bolstered by nearly $42 million in gifts during the campaign’s quiet phase, the College is more than halfway to its Fisher Forward fundraising goal.

Over the last several years, Fisher has opened several new buildings and made extensive enhancements to campus, including the Hermance Family Chapel of St. Basil the Great, the Walter and Barbara Parkes Trading Lab, the Loss Family Research Laboratory, and the Upper Quad Residence Hall, among others, while giving to student scholarships has increased significantly.

Key priorities of the Fisher Forward campaign will include investments in the campus’ physical infrastructure, focusing on new and expanded academic facilities, living and learning environments, and recreational spaces, all of which will continue to foster an exceptional community of learning with expanded academic programming opportunities that contributes to student success and strengthens the academic reputation of the College.

Other significant priorities of the campaign will expand opportunities for students to engage in simulated learning and educational experiences beyond the classroom through academic research and internships, as well as participate in national conferences and study abroad. These opportunities also enable students to serve the community in purposeful, mutually beneficial ways, directly supporting the core of the College’s mission statement, “preparing students for lives of meaning and purpose.”

In Rooney’s tenure as president, the College’s endowment has grown by nearly 25 percent, and the Fisher Forward campaign aims to continue that growth by another 50 percent. The increase in endowment funds will allow the College to expand the number of available scholarships, assure student access, and maintain affordability for those who will benefit most from a Fisher education. It will also establish endowed professorships, which will help the College attract and retain dedicated teachers and scholars who bring out the best in Fisher students by developing critical thinkers, engaged citizens, and career-ready professionals.

Giving to the Fisher Fund also saw a notable increase—up more than 200 percent—since the campaign’s quiet phase began. That’s momentum Salerno, whose $2 million gift during the Vision 2020 campaign is the largest alumni gift to date, is hoping to build on in Fisher Forward.

“Any investment we make in the future of the College is money well invested,” Salerno said. “As an alumnus, I couldn’t be more proud of St. John Fisher College today and I look forward to the impact of the campaign and strengthening the institution even further.”

For more information about the Fisher Forward campaign, visit fisherforward.sjfc.edu.