At one time or another, most dog owners have found themselves chatting up their four-legged friends. They may have even ruffled their fur, and said aloud, “I wonder how much you actually understand?” 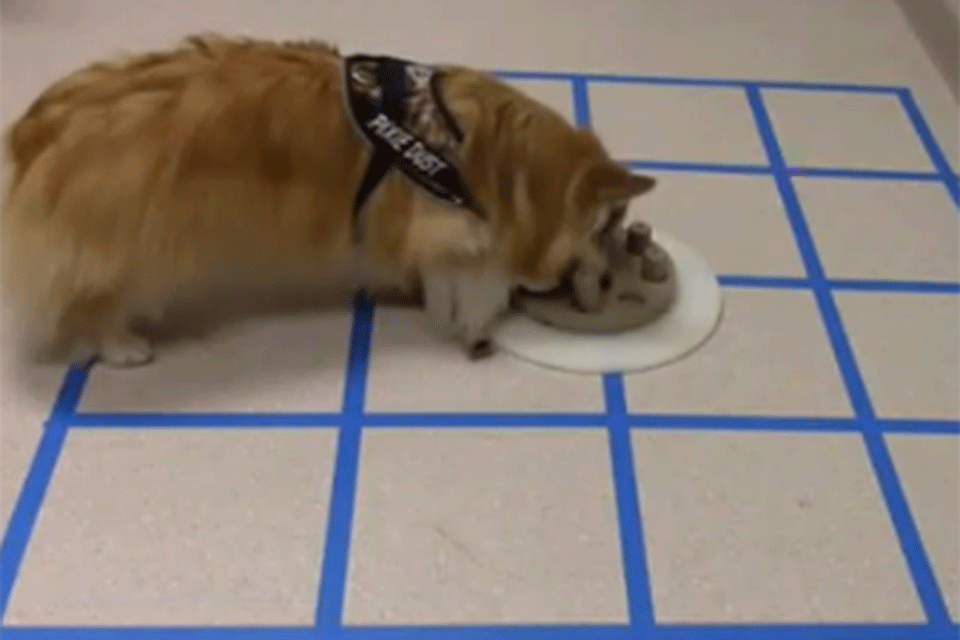 That is the question Dr. Dawn Rager, a psychology professor at St. John Fisher College, and her students tried to answer through a study that explored problem-solving performance among dogs.

During their senior year last fall, Dustin McCullough, Kim Rzepka, and Taylor Shirz had the opportunity to work with Rager on a research project designed to investigate problem solving in pet dogs. The students explored whether problem-solving performance in dogs would vary depending on the age or gender of the dog and whether it would correlate with dogs’ personalities and/or with the caregivers’ relationship with their dogs.

To measure the problem-solving performance, Rager and her students used a puzzle designed as a toy for dogs in which the dogs had to learn how to remove pieces of the puzzle to obtain treats hidden beneath the pieces. Many Fisher faculty, staff, and students lent their canine family members to the study.

In the first study, conducted in fall 2019, the research team found that only 12 of the 37 dogs (37 percent) attempted to solve the puzzle. For those dogs that tried to solve the puzzle, they discovered that their performance improved with practice. They also found that although the age of the dogs did not affect their performance, there were gender differences in problem-solving performances. Specifically, male dogs uncovered the first treat more quickly than females, but females appeared to be more persistent, which ultimately led them to be more successful than the males at solving the puzzle with repeated practice.

Finally, although they did not find any relationships between measures of the caregivers’ attachment to the dogs and the dogs’ puzzle performance, they did find that dogs who engaged with the puzzle had less fearful personalities compared to dogs who did not engage with the puzzle. And the less fearful the dogs were, the more quickly they explored the puzzle.

“Scientists are interested in studying topics such as personality, attachment, and problem solving in non-human animals (such as dogs) partly because such studies may provide insight into the evolution and development of personality, attachment, and problem-solving skills in humans,” said Rager. “Additionally, such studies will also further our understanding of our animal companions with whom many of us share our lives, and whom we also often depend on to help us solve practical problems.”