As a freshman at St. John Fisher College, Emily Trotman ’21 had always dreamed of becoming a marketing major. She was inspired by her brother, who majored in marketing as a student at Fisher. She saw the success it brought him, and she loved that it could take her anywhere. From that point on, she had a clear path with what she wanted to do for the foreseeable future. 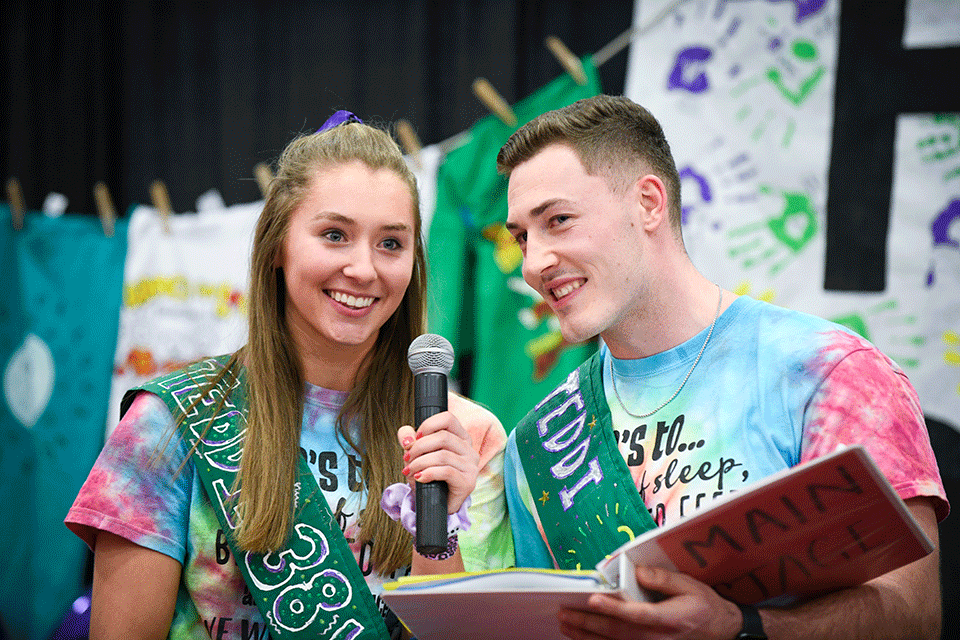 “I love the dynamic of marketing—the pace, the excitement—and I knew then I wanted to work in business,” she said. “I applied to Fisher with the goal of becoming something big one day.”

Trotman is also minoring in communications, which she says is due to being personable. It connects with marketing and with the business world in general, and she feels that being a good communicator will help her to be successful.

She has experienced different aspects on campus throughout her undergraduate career, and was a peer mentor during her sophomore year, helping a group of 25 first-year students delve into their college experience.

This past summer, she served as a social media intern for the interim dean of the School of Business, Dr. Carol Wittmeyer. She assessed the strength of several social media accounts for the School and dean, and used her social savvy to create content strategies while also increasing awareness of the business clubs throughout campus.

Currently, Trotman serves as an executive intern to the Office of the President, attending board meetings and committee meetings with Dr. Rooney. She also puts together projects and assists other interns to make sure they stay on task. As part of the program, and in particular, the president’s intern, she is also able to share her vision for the College and its future.

“It’s about creating the very best environment for Fisher students—from those who are satisfied to those who are struggling with unprecedented challenges,” she said. “So, we are placing a greater emphasis on making the Fisher community feel recognized and supported.”

In addition, Trotman is a member of Fisher’s varsity softball team, earning several Empire 8 All-Conference recognitions throughout her three seasons as a Cardinal. She has become known as one of the top pitchers in Division III as she led the Empire 8 in wins with 23 (which was the fifth-highest total in program history). Her junior year season was cut short due to COVID-19; but she started in all ten games and in March, was selected as National Player of the Week by the National Fastpitch Coaches Association and Empire 8 Player of the Week by the conference. During that season, she hit two home runs and was named to the NFCA Leadoff Classic All-Tournament Team.

Alongside her involvement in athletics, and at the School of Business, Trotman assumed the position of chair of the Teddi Dance for Love committee, leading more than 250 students in organizing one of Fisher’s most beloved traditions, the Teddi Dance for Love. A fundraiser to benefit Camp Good Days and Special Times, the 24-hour dance marathon draws nearly 500 students annually. Last year, the dance raised a record-breaking $111,267.21 to benefit Camp, the highest total ever raised in the dance-a-thon’s 38-year history. This year, Trotman will help the committee navigate challenges associated with COVID-19 restrictions while working to break last year’s fundraising record.

After earning a degree in marketing, Trotman plans to pursue the MBA program at Fisher. Beyond that, she sees herself working for a non-profit organization or for a philanthropist within the Rochester area.

“I love the atmosphere and work that Teddi brings to me and I believe that it would be my strong suit,” she said, adding that being able to market fundraising events would be an amazing opportunity.

As an active member of the campus community, Trotman has found the recipe for student success: work hard and be authentic.

“You need to stay on top of everything you have. Practice makes perfect and if you make the effort to put forth your best in class, it will show in the real world,” she said. “Be professional, reflect yourself on others, and they will see the good in you.”

This article was written by Salvatore Saunders as part of an Honors program course. A sophomore, Saunders is majoring in marketing and minoring in sport management. He is currently the vice president of Fisher’s chapter of the American Marketing Association. He also works with the assistant dean at the School of Business as a marketing and communications specialist, where he helps to promote and communicate activities, events, and recognitions. Saunders plans to pursue a master of business administration from St. John Fisher College once he earns his bachelor’s degree.