After missing the 2020 Courage Bowl, the St. John Fisher College Cardinals are ready to take the field this Saturday, Oct. 2, to face The College at Brockport Golden Eagles for Courage Bowl XVI. This annual football tradition benefits Camp Good Days and Special Times, an organization that has served children with cancer and their families for more than four decades and one that is close to the hearts of many Fisher students, employees, and alumni. 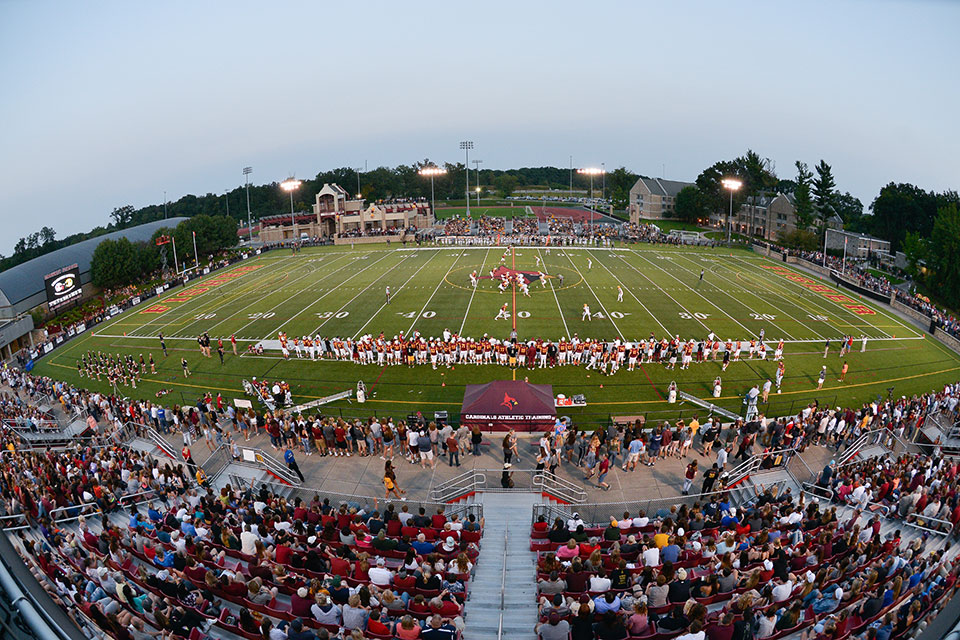 This year’s game returns to Fisher’s Growney Stadium and kick-off is slated for 6 p.m. The Courage Bowl – coined “more than just a game” – has become one of Camp’s largest fundraisers since it began in 2004.

Each year, Camp chooses campers to serve as honorary coaches and cheerleaders. The campers have the opportunity to meet the team and squad of each college, attend a practice, and be a part of the action on the sidelines on game night, giving them a chance to participate in a real athletic experience – a chance most are not able to have because of their illness. President Gerard Rooney, who has seen every Courage Bowl, said that connections made between the student-athletes and honorary coaches and cheerleaders are always the high points of each game.

“While we will no doubt watch each team play to win, we know that some of the most special moments will happen on the sidelines.  For one night, and for this one game, everyone will win,” he said.

This year, campers Logan Mortellaro, Roman Statt, Karleigh Sackett have been chosen as Fisher’s honorary coaches and cheerleaders while campers Jayce Imerese and Lillee Bronson will participate on the College at Brockport sideline.

The College will celebrate Courage Bowl Week beginning Monday, Sept. 27 through Friday, Oct. 1 with some events and traditions:

Thursday, Sept. 30 – Look up! Are you ready for some football? Kearney Tower will be lit red and gold in honor of the Courage Bowl.

Friday, Oct. 1 – Wear your Fisher gear and receive 10% off of your purchase at Cyber Café and Pioch Café! at 8 p.m. in the Campus Center, join SAB in making posters for a chance to win an awesome Fisher Football-themed basket. You can also pick-up spirit gear including tattoos, foam fingers, boom sticks, pom poms, and more!

Tickets are now on sale and are available on a first-come, first-serve basis. General admission seats are $5. Tickets can be purchased online or via cash or check in the athletic administration office in the Ralph C. Wilson, Jr. Athletic Center Monday-Friday, from 8:30 a.m.– 4:30 p.m. Season ticket holders do not need to purchase additional tickets for this game.