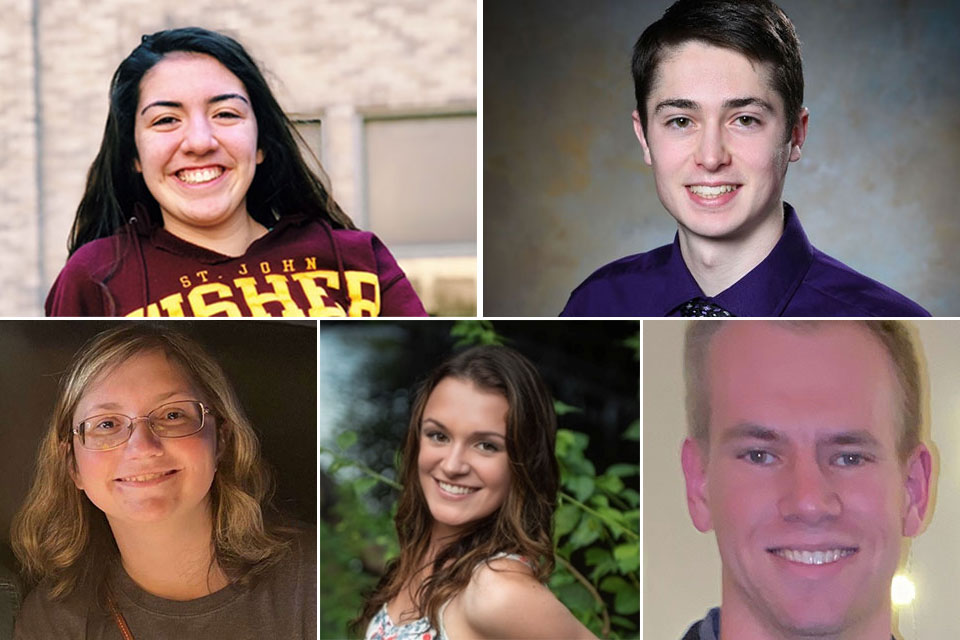 The grants were funded by the TriBeta Research Scholarship Foundation. A national biology honor society, TriBeta provides funding to undergraduate students conducting research through these competitive awards. Fisher has had an active TriBeta chapter since 2013.

Lennahan will use the TriBeta grant to research water samples collected around Rochester, to identify if there are any toxin-producing algae, called microcystins, which have caused negative effects to species in the lakes as well as humans. Lennahan said she values the opportunity to conduct undergraduate research.

“Undergraduate research has provided me with confidence within myself as well as thinking outside the box to develop and propose this research project,” she explained, adding that being involved with the advanced science community and having this experience has not only made her a better scientist, but also a stronger candidate for medical school.

Lane also noted how important conducting research as an undergraduate is to his future goals. “Undergraduate research allows us to scientifically explore concepts we are interested in outside of a class setting,” he said, adding that research pushes boundaries and expands knowledge through discoveries. He said that this experience has made him more comfortable with research techniques and presenting his research.

Lane’s grant will be put towards purchasing more forward and reverse primers, 20 nucleotide DNA sequences that target a specific gene, which will be used in quantitative polymerase chain reaction (qPCR) which is a technique used to display gene expression.

Keenahan said that conducting research has pushed her to think outside of the box and trust her own knowledge. “I am much more confident in making decisions after almost a year of experience and feel I can now independently approach most challenges that come my way in the lab,” she said. “Research has also challenged my patience, since it is common for experiments to fail. You're forced to tweak things and try again even if you're not 100 percent sure what went wrong. The growth I feel I've had working in the lab has impacted me as a student all around.”

Terry said that the experience of writing the grant proposal was another aspect of knowledge he has gained. “It forced me to truly understand the end goal of my project and all the necessary steps to get to those results,” he said. “It was a good learning experience that has definitely made me more prepared for my future endeavors.”

For Chouinard, conducting research helped crystalize her career goals. Originally bound for medical school, she fell in love with research and has decided to pursue graduate schools instead. “I have gained valuable experience from engaging in research, including cell culture techniques, problem solving skills, and devising experimental procedures,” she said.

This year, Dr. Noveera Ahmed, associate professor and chair of the Biology Department and TriBeta faculty advisor, was selected to serve as the Northeast-3 District Director for TriBeta. With her involvement, the department will be able to have a voice in this national organization that is dedicated to excellence in undergraduate biology education and research.