On Tuesday, Aug. 17, St. John Fisher College inducted the newest members of the Presidents Society, philanthropists who have made commitments to the College of $1 million or more. 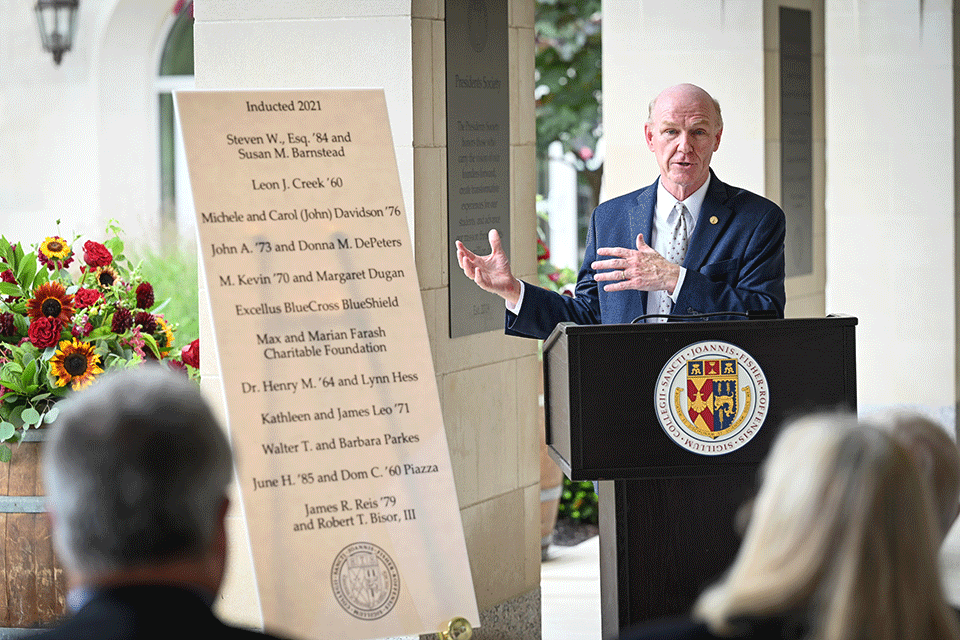 President Gerard J. Rooney shared remarks that celebrated the philanthropic support of each inductee during a ceremony unveiling the addition of the 12 new members to the recognition plaques on the columns of Kearney Hall.

“Our campus has been enriched by your philanthropy through the creation of physical spaces, such as the DePeters Family Center for Innovation and Teaching Excellence, and scholarship opportunities, notably the First in Family Award given by the Max and Marian Farash Foundation, and so much more,” he said. “You have my sincere thanks for your commitment to Fisher and our students, for your belief in our mission, and for your generosity that will continue to move Fisher forward.”

While at Fisher, Barnstead was involved in the Student Government Association, serving on the board’s executive council, and was a leader in the Economics Club. After graduating from Fisher, he went to the Albany Law School and has been practicing law since 1988. The Barnsteads are founding members of the College’s Spire Society, Fisher’s leadership giving society and members of Fisher’s 1948 Society honoring individuals who have named the College as a beneficiary of a planned estate gift. Additionally, and for over three decades, they have been consistent supporters, making gifts to the College’s area of greatest need fund.

Before his passing, Creek generously committed a bequest to the College. Because of his long-standing career in library services at the University of Rochester and his volunteerism in the University of Kentucky library system, his generosity will help the College conduct a visionary process re-imagining the Lavery Library and supporting programs. This process will lead to a transformational architectural plan that includes a state of the market learning commons and Lavery Library.

The Davidson family has an endowed scholarship in their name (Davidson Education Opportunity Bridge Endowed Scholarship) that supports two incoming first-year students from a Rochester area high school each year. Their scholarship, which is renewable for up to eight full-time semesters, was established to support African American or Latinx heritage students who have a high degree of financial need. Each Davidson Scholar also receives individualized mentorship by a member of the Fisher faculty and staff and has the opportunity to engage in a paid experiential learning opportunity.

DePeters, former Board Chair, current Trustee, and the College’s most recent honorary degree recipient and his wife, Donna, along with their family, made a $1 million gift to create the DePeters Family Center for Innovation and Teaching Excellence. In honor of his retirement from Wegmans after an impressive 52-year career, the company matched his $1 million gift in December 2019. The establishment of this Center will further Fisher’s commitment to teaching and learning in a student-centered educational environment. The Center's mission is driven primarily by two key elements; pedagogical best practices and educational technologies used for teaching and learning purposes. It will also enable the creation of state-of-the-market learning spaces, transforming classrooms across campus.

The Dugans’ philanthropy has been transformational to Fisher Athletics. The creation of Dugan Yard – Fisher’s baseball facility and field – set the Cardinals Baseball program on a path to national prominence. Dedicated to Kevin’s father, Donald M. Dugan, and opened in the spring of 2001, Dugan Yard is one of finest NCAA Division III baseball venues in the country collegiate baseball today. Their continuing financial support has enabled further development through the years. In 2007, Dugan Yard was enhanced with the addition of a club house, training facility, and press box. In 2011, the facility was upgraded again with the addition of a grandstand. This fall, the facility is undergoing several more upgrades, including updates to the press box, renovation of the club house, additional grandstand seating capacity, and an enhancement of the entryway and overall stadium aesthetic.

Excellus BlueCross BlueShield has been a valuable partner of Fisher since 2005. Through Excellus’ generosity, the College created PrimeCare in partnership with St. Joseph’s Neighborhood Center, an academic nurse-managed model that provides primary care, mental health counseling, community outreach, and education for underserved and vulnerable populations in the Rochester community. Excellus also created an undergraduate diversity scholarship that is awarded to two full-time sophomores, juniors, or seniors each year. Finally, their grants have supported the Wegmans School of Nursing’s partnership with the Rochester City School District and the American Lung Association’s Open Airways Program to address the largest chronic health issue among the district’s student population.

The Max and Marian Farash Charitable Foundation has been a long-time supporter of the College, providing grant funding that has enabled Fisher to serve as an effective partner in and with the broader community, financial support for students, and support for the development and deployment of several impactful internal and external programs. Of note, the Farash Foundation provides a First in Family scholarship to first-generation college students that enables them to graduate debt free. Fisher welcomed its first Farash Scholar in 2012, and has had 13 Farash Scholars since that time. The Farash Foundation has also supported initiatives including the work of the College’s Institute for Civic and Community Engagement and the Social Innovation Academy.

The Hess’ have been long-time supporters of chemistry students at Fisher through an established scholarship program. As a chemistry graduate himself, Hess has always had an affinity to the program. A distinguished scholar and teacher, practitioner, and author, Hess was inducted into the College’s Science and Technology Hall of Fame in 2014. He has been a guiding force behind the College’s Annual Integrative and Complementary Medicine Symposium. He has also volunteered at Fisher as a scholar-in-residence – meeting with the student pre-health association, consulting with the pre-health advisor, and mentoring students as they participated in practice interviews for medical school.

The Leos have supported a number of areas of campus, including establishing scholarships in the School of Business and providing generous support to the Hermance Family Chapel of St. Basil the Great. They have also graciously donated funds to renovate the former board room on the second floor of the Joseph S. Skalny Welcome Center, which was recently completed. Now named the Leo Community Room, the space is home to Information Sessions and Open House events, offering prospective students and their families a welcoming, spirited introduction to campus. The Room also gives the College a versatile and technologically rich setting to host myriad meetings of campus and community members.

Over the last several years, the School of Business has benefitted from the philanthropic support of Walter and Barbara Parkes. In 2019, the School opened the Walter and Barbara Parkes Trading Lab in the Victor E. Salerno Center for American Enterprise. The lab is equipped with Bloomberg Terminals, a software platform that provides real-time and historical data and market moving news to help lead businesses and financial professionals to make better-informed investment decisions. Earlier this year, the Parkes made an additional gift to benefit the Trading Lab, which includes funding for continuing technology support and equipment needs for the space. Parkes is chairman of Victor, New York-based O'Connell Electric Company, one of the top fifty electrical contractors in the nation.

The Piazzas have generously supported the annual fund for the School of Arts and Sciences as well as their scholarship, the Dominic and June Piazza Minority Scholarship. Established in 1989, the scholarship supports underserved students from the Rochester City School District and has helped the College to attract and enroll a more diverse undergraduate student population. They also have a planned gift established to create the June and Dominic Piazza professorship within the School of Arts and Sciences, that will help the College recruit and retain highly trained faculty. Additionally, Dominic Piazza was a founding member of the President’s Advisory Council, a select grouping of alumni and community leaders who advise the College President on a variety of matters.

Reis and Bisor established the Reis-Bisor Scholarship several years ago to support two incoming first-year students each year, to a total of eight students per year, with the hope that recipients will have the ability to fully engage their collegiate experience and graduate with little to no debt. Their scholarship benefits students who are the first in their family to attend college and who have demonstrated financial need. Reis and Bisor regularly meet with their scholars and provide them advice and mentorship. The impact of the Reis-Bisor Scholarship can be seen in one of its first recipients, Alex Fraguada. A graduate of the College’s Class of 2021, Fraguada was recently hired by the Office of Freshman Admissions, and is now working to enroll future Fisher students.