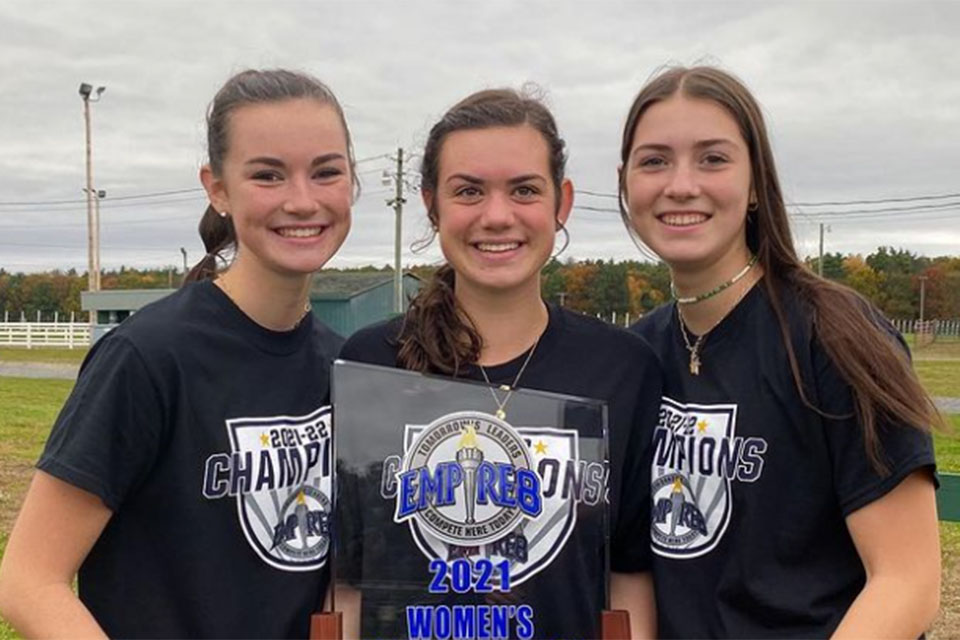 Alivia, Angelea, and Victoria Collins are each members of the women’s cross country program, helping to contribute to the team’s recent Empire 8 Championship.

The eldest sister, Alivia, is a senior majoring in nursing; Angelea is a sophomore management major; and the youngest sister, Victoria, is also pursuing nursing. Natives of Corning, New York, Victoria and Alivia chose Fisher because of the prestigious nursing program and the athletic department.

“Being at Fisher felt like a home away from home. I really liked the size and the atmosphere once I got on campus,” Alivia said.

The academic reputation was also very important for Angelea’s decision. “Deciding to attend Fisher has not only benefited me academically but also individually because of the amazing opportunities of the School of Business,” she added.

Each sister loves Fisher in her own way, and having each other also attend is an added bonus.

When it comes to being on the cross country team together or participating in other campus activities through the Office of Campus Ministry, the sisters agree that they have found a good balance between being close and forming their own college friendships.

“When I want to spend time with them, they are just a few steps away but if I want to have my own college experience with my friends, I am able to do that as well,” Alivia said, adding that she loves being on the team with her sisters because it allows her to always have them close if she needs someone.

“There is a lot of comfort knowing your sisters are right on campus in case you need anything,” she explained. Indeed, like any other sibling relationship, Alivia says that sometimes they can get on each other’s nerves, but that deep down they all enjoy being together.

The Collins’ parents are huge supporters of the cross country team. Angelea said she thinks their parents secretly hoped they would all end up on the same team together while they were going through the college search process.

“We each made our own decision to attend Fisher based on different individual factors knowing that our parents were going to support and be happy with whatever college we chose,” she explained. Alivia added that their parents are happy knowing that the girls are in the same place and will always look out for each other.

Though they each graduated from McQuaid Jesuit, this is the first time brothers Tim, Ryan, and Brennan Brown are playing soccer together.

“In the past, there have been times where two of us will play together on the same team, but college has been the first time we have all played together,” Brennan explained.

Being on the team together is not only convenient, but fun.

“If I ever want to get a meal or go kick the ball around, I always have someone to ask,” Brennan said, adding that they’re successful on the field in each of their respective positions. “We have chemistry that comes from being related and knowing each other really well on and off the field.”

Ryan said that being together sometimes brings out their competitive sides, for better or worse. “Being on a team together can be difficult - especially when we go at it to really see who is the best out of the three of us,” he said.

Brennan, a senior, and Tim, a junior, are both pursing nursing, and Ryan is a sophomore majoring in accounting. They chose Fisher because of the positive things they heard about the nursing and business programs and the nice location. They also thought the soccer team would be a great fit for each of them. Fun fact: they aren’t the only family members on campus - their dad, Kevin, works for the Office of Safety and Security.

This article was written by Leslie Noble, Marketing Major ’21, the PR Writing Intern with the Office of Marketing and Communications.