A documentary by Linda Moroney, an adjunct professor at St. John Fisher College and Rochester-based filmmaker, recently broadcast on WXXI. The film, “Women and the Vote,” is a tribute to the 100th anniversary of the passage of the 19th Amendment. Emily Passmore, a senior media management major, also worked on the film as a Summer Research Fellow. 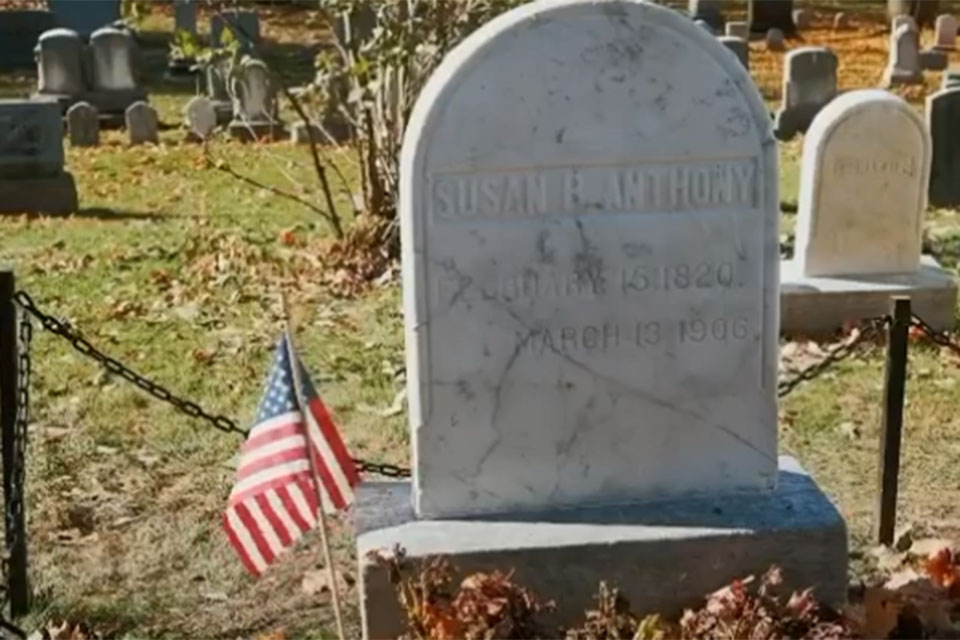 “Women and the Vote” is a mosaic-style documentary on the past 100 years of women’s political equality, the present moment, and the possibilities for the future. The documentary includes visits to the burial sites of suffragists across New York on Election Day 2020, and features interviews and footage of visitors at cemeteries in the Bronx, Sleepy Hollow, Auburn, Rochester, and Buffalo. Visitors of all ages shared their stories on why they made their visit to these burial sites and their thoughts on the political world today. Moroney wanted to create archival sections that give a first-person voice to suffragists who can no longer share their stories.

Moroney and Passmore spent the summer researching online and in facilities to find newspapers, audio recordings, and footage to develop the film. Their research spanned all the way from UCLA to Rochester. Moroney said working with a student as a part of the Summer Research Fellow program was an amazing opportunity for both students and faculty. “The program was well-organized and streamlined perfectly,” she said.

Passmore truly enjoyed having the opportunity to work on the film. “Through this experience, and through working with the talented and dedicated team behind the film, I grew not only as a researcher but as a filmmaker and storyteller,” she said. “Seeing the finished film broadcast was very moving and empowering. I am not only proud of the film but am also inspired by the women who fought so hard for suffrage and am honored to be able to help tell their stories.”

The film is part of Woman and The VoteNYS, which provides a suffragist directory and interactive map to help individuals explore New York’s extensive and influential suffragist history.

This article was written by Leslie Noble, Marketing Major ’21, the PR Writing Intern with the Office of Marketing and Communications.