On Friday, Oct. 7, St. John Fisher University honored David Ocorr, a longtime champion and advocate for the baseball program, by renaming the coach’s office in his honor. 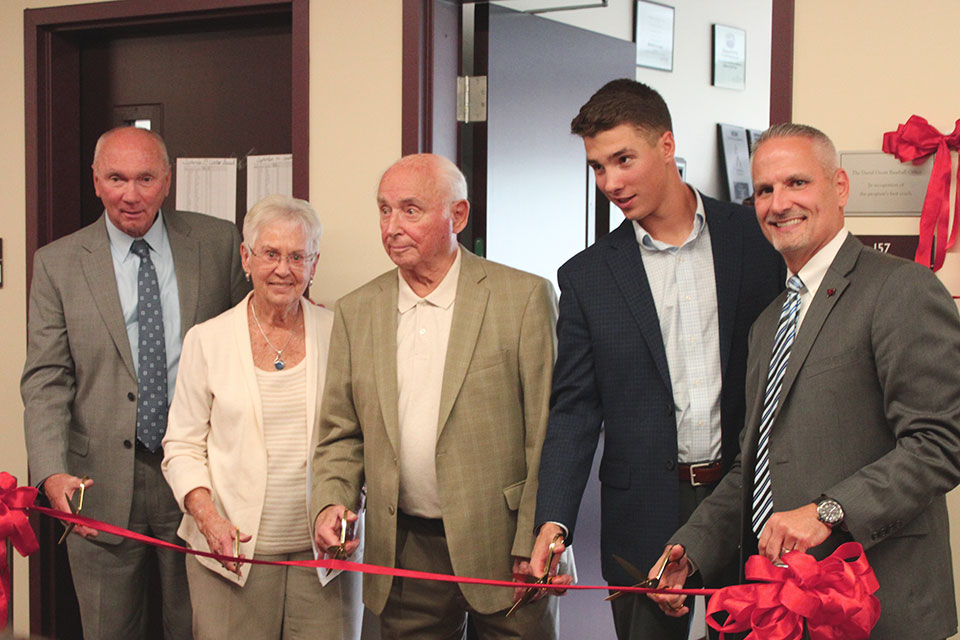 Ocorr, who served as vice president for development at the University, was largely responsible for launching the baseball program, and served as its inaugural head coach. In summer 2022, he made a philanthropic gift to the program as part of Fisher Forward, the most ambitious comprehensive fundraising campaign in the University’s history.

“While at Fisher, our baseball players and all of our student-athletes learn valuable, practical skills such as sportsmanship, time management, discipline, and commitment to a common goal,” said Jose Perales, vice president for enrollment management at Fisher, during the ceremony. “These important life skills will not only serve them well in the classroom, on the field, and in all of their campus experiences, but far beyond their time at Fisher, well into their chosen career and life paths. David, we are most grateful to you for your commitment to our student-athletes, especially those in our baseball program.”

Over the years, the program has experienced tremendous growth and success. During the 2022 season, Fisher finished 31-16 including an 18-2 mark in league play. Under the direction of head coach and alumnus Brandon Potter, who was named the Empire 8 Coach of the Year, the Cardinals won their second consecutive Empire 8 crown and reached the NCAA Regional round for the seventh time in program history. The team was also recognized with a Team Academic Award by the Empire 8 earlier this summer, finishing the 2021-22 academic year sporting a cumulative 3.20 GPA.

Since 2010, the Cardinals have had three players selected in the Major League Baseball Draft. Most recently, in 2021, program alumnus Adam Zebrowski was drafted to the Atlanta Braves in the 13th round.