St. John Fisher University honored 15 graduates at a special luncheon and ceremony during Alumni Weekend. The celebration recognized Dean’s Medal recipients from each of the five Schools and graduates of the last decade with the Ten Under 10 Awards. 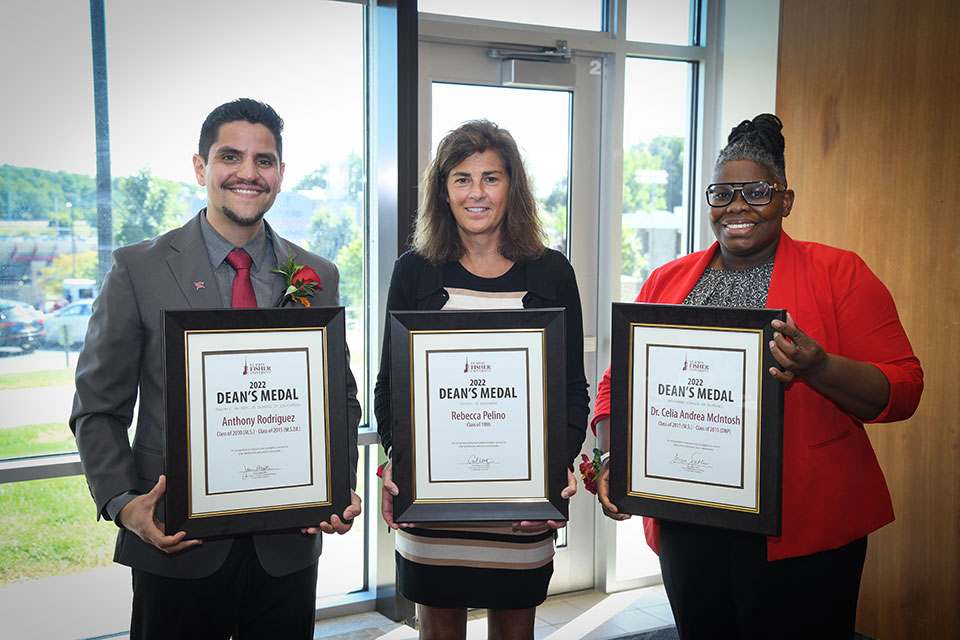 Rodriguez is a Double Cardinal, having completed Fisher's graduate initial certification program and the educational leadership program. He is a bilingual Assistant Principal at Monroe High School and in this role, he assisted and branded the “Pathway to Seal of Bi-Literacy” program. Under his supervision, Monroe has become a New York State Seal of Biliteracy leader in Western New York. He has helped to increase Monroe’s graduation rate from 51 percent in 2015-16 to 81 percent in 2019-2020 and he developed Regents exam study materials in Spanish for students in Global 2 and US History. His commitment to the youth of Rochester was recognized and he was given the IBERO Action League's Community Involvement Award.

Loss, an alumna from the Class of 1992, is a key member of the Dermatology Associates of Rochester team, having been a part of the practice for over 25 years. During that time, she has been a general dermatology nurse, a surgical assistant, and a laser and leg vein treatment specialist. She currently serves as a sub-investigator in Skin Search and a provider in the DermaSpa.

She has been the associate director of Skin Search Rochester, Inc., and DermaSpa, a partner of Dermatology Associates, since inception. Loss took over her husband’s position as president and director of operations after his sudden death in 2008. She has been a certified clinical research coordinator since 2007 and has participated in multiple research symposia at the University of Rochester Medical Center. She is an active member of the National Association of Clinical Research Professionals, New York State Nurse Practitioner Association, and SOCRA – Society of Clinical Research Associates, and has coordinated and/or administered hundreds of clinical trials. She also stays actively engaged with the Fisher community as a member of the Board of Trustees and is closely connected with the annual Loss Lecture.

School of Business alumna Pelino is a founding partner and managing partner with Capital Investment Advisors (CIA). She is responsible for CIA’s acquisitions and manages deal origination and capital sourcing. She oversees all project management activities, contracts, and leasing and sales efforts for CIA. Prior to forming Capital Investment Advisors, Pelino was a managing partner in a land development firm who developed, owned, and sold over $140 million of residential land for development. She holds a Class A General Contractors License and has been involved in new construction projects and renovations of multifamily projects, commercial projects, and single-family detached homes since 1989.

In addition to her incredible career success, Pelino has remained engaged with the University. She funded the creation of a new entrepreneurship-in-residence position in the School of Business and recently hosted Fisher students for lunch during the inaugural Fisher Flight, a career immersion program in Washington, D.C.

While pursuing a doctorate in nursing practice at the Wegmans School of Nursing, Double Cardinal McIntosh conducted groundbreaking work with stroke patients and depression. Her clinical scholarship project focused on the development and implementation of depression screening and treatment protocols at stroke centers, so that any patient whose CT scan or MRI was positive for a stroke would be screened. Nurses would then work with patients to provide an educational booklet on stroke and depression, and discuss possible treatment options with the patient. The screening protocol that McIntosh developed is now embedded into Rochester Regional Health’s electronic medical records, allowing practitioners systemwide to use the tool when working with stroke patients. Since its implementation, McIntosh has given multiple regional, national, and international talks on the screening protocol, and published an article in the Journal of Neuroscience Nursing.

Advocacy for patients is a theme throughout McIntosh’s career. When walking into work about eight years ago, she engaged in conversation with representatives from Rochester Regional Coalition Against Human Trafficking (RRCAHT), who had set up a table with educational materials. As she learned more about the organization, she felt a strong pull to involve herself in the work. Today, she serves as president of RRCAHT, working to increase its presence in the Rochester community.

Patel is a pharmacy manager with Wegmans Foods Market, and is a model alumnus for current students. He was a student leader, served as the class president, and continued his engagement with the School, including returning to campus to share inspiration for future classes as a speaker at the annual white coat ceremony. 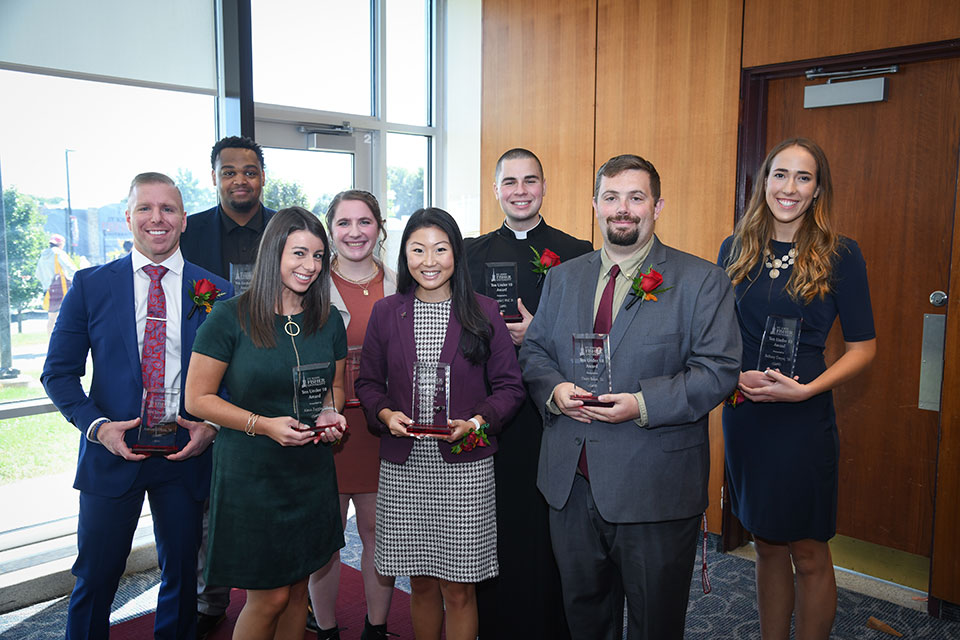 The Ten Under 10 Awards recognize individuals for their personal and professional successes, as well as their commitment to the community early in their careers. This year’s alumni honorees included health care providers, business professionals, community advocates, and served as mentors for current Fisher students.

A 2014 graduate with a bachelor’s degree in childhood and special education, Baker is a fourth-grade teacher at Bradford Central School District where he has built strong relationships with his students and excelled as an educator. Additionally, he serves as president of the Yates County Community Theater Group, volunteering hours of time directing and performing in productions. He has also helped the group fundraise and garner a $1 million grant from New York State to renovate the historic Sampson Theater in Penn Yan.

Conyers holds a Post Master’s Certificate DNP and is currently the clinical associate professor at George Washington University. Conyers holds expertise in population and community health, focusing on preventative care of complex conditions. Since graduating from Fisher, she is most proud of starting the Rochester chapter of the National Black Nurses Association. In 2020, she was selected among the Association’s 40 and Under awardees; one of only nine nurses from across the country to be given the honor.

DeRaddo, who earned a bachelor’s degree in biology, is currently chief resident and medical instructor at the Department of Pediatrics at Duke University School of Medicine. At Duke, he is a part of an academic program with both complex and high acuity care that exposes him to a wide spectrum of patients and illnesses that he might only see once in his career. He is most proud of his work in developing and implementing a food insecurity screening program at pediatric clinics. This has been blended into a large collaboration across health systems to screen for social determinants of health and provides much needed resources.

DiPerna is a 2016 graduate who earned a bachelor’s degree in political science and legal studies. At Fisher, he was a First Generation Scholar and maintained the award throughout his academic career. DiPerna went on to attend the University of Buffalo Law School where he became the head student representative of Barbri and won the Best Appellate Brief and Best Oral Advocate at the Desmond Moot Court. He served as executive editor for the Public Review Law Journal and spent time working with the sports division of UB’s law program. Today, DiPerna is an assistant district attorney at the Monroe County District Attorney’s Office.

Dreyer is a 2018 graduate from the Wegmans School of Nursing. Among her most outstanding post-graduation accomplishments is earning a master of public health degree, working as an emergency room nurse, and interning at a refugee center. She then moved to North Africa where she volunteered with Samaritan’s Purse, an evangelical Christian humanitarian aid organization that provides aid to people in physical need as a key part of its Christian missionary work. In North Africa, she was the director of a nursing school. Today, she is works as an emergency travel nurse while pursuing a Doctorate of Nursing Practice.

Flanagan began her current position at Social Yeah just weeks after earning her bachelor’s degree from Fisher, where she spent her time actively benefiting the campus community through involvement in several clubs and organizations. During her five years with the Social Yeah, she has been trusted with managing accounts and maintaining client relationships. In addition, she has helped train and mentor employees with a constant reminder and guide from the Fisher motto, “teach me goodness, discipline, and knowledge.” Her peers look to her for her knowledge on social media and graphic design, designing logos, invitations, t-shirts, and more. She has assisted young entrepreneurs in creating logos and helped job-seekers update their résumé.

Rush, a member of the Class of 2012 and graduate of the School of Business, currently serves as the executive director of the Champion Academy Extreme Mentoring & Empowering Initiative. As director, he assists urban teens in poverty overcome their traumatic experiences and use them as fuel to drive their improvement as students, citizens, and future professionals. Rush and the Champion Academy have serviced over 2,000 teens in the Rochester Area. Prior to this role at Champion, he worked for the Rochester Prep Charter School where he assisted students and staff on a daily basis.

As a Fisher student, Seaberg was a Service Scholar, where she spent a great deal of time volunteering with Heritage Christian Services. She was also involved in service projects on campus including the Teddi Dance for Love. Her senior year, she served as an executive intern with the Office of Marketing and Communications. After graduating with a bachelor’s degree in media and communication, she was hired as a content marketing specialist for 13thirty Cancer Connect, a nonprofit organization working to serve adolescents and young adults with cancer. Seaberg has taken their marketing efforts to the next level, managing social media, content creation, and enhancing their presence and engagement, and in 2021, paired her passion for the organization with her love of tennis to create a tennis tournament to benefit 13thirty.

Wild, a 2020 graduate of the University, earned a bachelor’s degree in religious studies and philosophy. As a first-year student, he wasted no time getting involved on campus and remained an active member until Commencement. A Service Scholar, he volunteered at the Ronald McDonald House, served as an emcee at the Teddi Dance for Love, and gave campus tours to prospective students and their families as an ambassador for the University. Today, he is engaged in ongoing preparation to become a naval chaplain, showing his commitment to excellence, the importance of discipline, and his love for knowledge. He is currently a Seminarian, Ensign to the U.S. Navy and is studying for the priesthood.

Zappia graduated from Fisher with a bachelor’s degree in education and English. During her time at the University, she was a Service Scholar, and launched Rocks of Unity, a brand of educational workshops that affirms diversity as a strength through kindness, acceptance, and unity. Today, Zappia serves as a national television casting producer at Kassting Inc. and Reece & Co., where she has helped produce several prime time shows, including “Don’t Forget the Lyrics” on FX, “The Hustler” on ABC, “Love is Blind” on Netflix, and “The One That Got Away” on Amazon Prime, among others. Zappia attributes much of her success to the education she received while at Fisher and the support she received from faculty and staff.