At Commencement, Fisher Alumnus Encourages New Grads to be a “Positive Force”

More than 700 undergraduate, master’s, and doctoral students graduated from St. John Fisher College on Saturday, May 11. Their charge: find ways to make the world a better place to live. 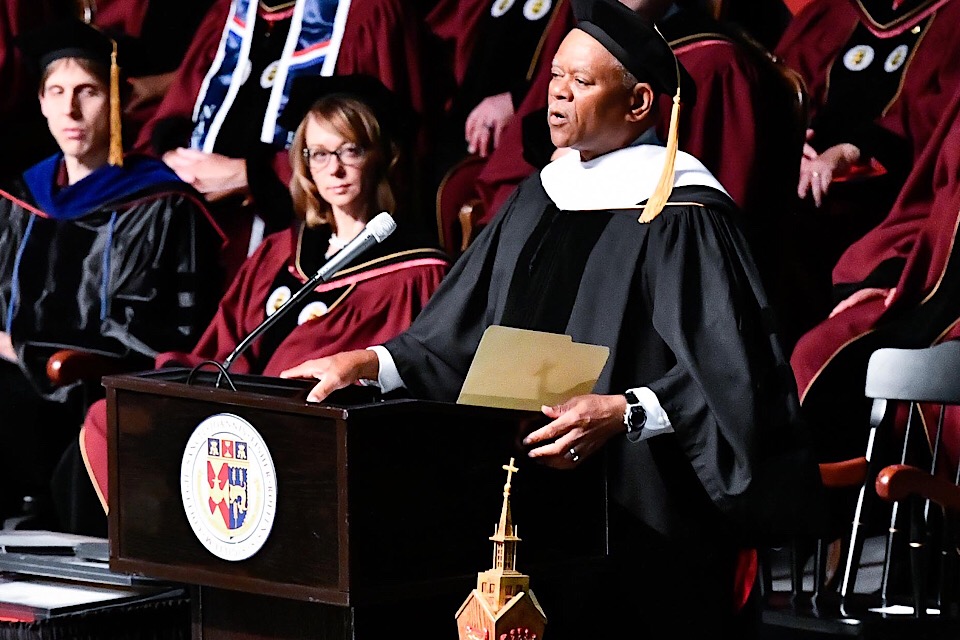 That encouragement came from William G. Clark ’78, past president and chief executive officer of the Urban League of Rochester, who offered remarks as the College’s 65th Commencement keynote speaker. The College also bestowed an Honorary Degree of Doctor of Humane Letters upon the Fisher alumnus at the ceremony.

Clark, who recently retired from a three decade-long career at the Urban League, reflected on his time with the organization and his volunteerism as a mentor and tutor for youth in Rochester. He urged graduates to define their legacies by the positive impact they will have in their communities.

“I ask you not to wait until you think you have achieved success to start improving your community. Make a pledge to start today,” he said. “Our community is in need of volunteers, so please, roll up your sleeves, and accept the challenge. If you dedicate yourself to the service of the betterment of your community, you will find there is nothing more rewarding.”

Clark spoke of how community service is woven into Fisher’s values and motto.

“Never lose sight of the important lessons you’ve learned at this great institution, which is to not only be successful, but be a positive force in the region, across the state, and throughout our nation,” he said. “Represent this institution proudly by being fully engaged in building a stronger Rochester and a stronger, more caring world.”

Victoria Loysen, president of the Class of 2019, also encouraged her fellow graduates to take chances and be open to opportunities.

“If no one ever ventured into the unknown, we would not be where we are today,” Loysen said. “Now it is time to get out there into the world and experience everything.”

Aviana Catarisano ’18, who earned her MBA, delivered remarks on behalf of master’s and doctoral students.

“We, and we alone, are in charge of the success we make in life, and if we care enough about it, we will go the distance,” she said. “We create our own path, our own recommended progression, our own passions. All while remembering that the world doesn’t owe us anything but is endless to those who dare to take advantage of it.”

The ceremony also featured award presentations to students, faculty, and community members. Graduating senior Kevin Mueller, economics major and philosophy minor, was the recipient of the Trustees Distinguished Scholar Award, which is given to the graduating senior with the highest cumulative GPA based on at least 100 credit hours. Anthony Scarcelli and Melissa Smith both earned the Ranking Scholar Award, having earned the highest cumulative GPA.

Dr. Ryan Thibodeau, associate professor of psychology, received the Trustees’ Award for Distinguished Scholarly Achievement. This award is the highest honor that the Board of Trustees can bestow on a faculty member, second only to an honorary degree. It is given to full-time faculty members in recognition of outstanding scholarly work, ranging from writing books and articles, to presenting papers at professional conferences.

Thibodeau joined the College’s Psychology Department in 2008 and since then has engaged in significant research, shown a commitment to his students, and has served the College in a variety of ways outside of the classroom. He has made outstanding contributions to both the discipline and to the students through his research. During his professional career, he has published 16 scholarly articles, as well as six book chapters and delivered nearly 30 conference presentations, both nationally and abroad. To date, he has published seven articles on his most emergent area of research—stigma and perceptions of individuals with mental illness—with five of the publications co-authored by Fisher students. His works have been cited more than 1,000 times by fellow researchers.In 2018 alone, his work was cited nearly 160 times.

This year, the Award for Teaching Excellence was given to Dr. Lori Dambaugh, associate professor in the Wegmans School of Nursing and director of the Clinical Nurse Specialist Program. Chosen by students, the award is given annually to full-time faculty members for outstanding work in the classroom. Award recipients must demonstrate thorough knowledge of their subject matter, solid preparation for class, clear and effective communication, and genuine enthusiasm for their job.

In bestowing the award upon Dambaugh, Dr. Kevin Railey, the College’s provost, read from several student nominations, which detailed her mentorship, commitment their education, her “exceptional knowledge” of not just her specialty, but also of the nursing profession.

One student nominator described Dambaugh as a “phenomenal instructor who truly cares about her students” and “is an example of the kind of nurse I want to be and is a wonderful role model in and out of the classroom.”

In closing out the ceremony, Rooney offered parting advice to the Class of 2019. “Live the motto of your alma mater - practicing goodness first, tempered by discipline, informed by knowledge,” he said. “Remember the lessons you learned at Fisher. You will face challenges and triumphs in life, joys and sorrows, but if you continue to use the goodness, discipline, and knowledge you are taking with you as you leave our great institution, you will be able to confront the difficult time and enjoy the success.”