The Class of 2023 entered Fisher this past fall more than 600 students strong. Among those students were seven sets of twins. Yes, we said seven. 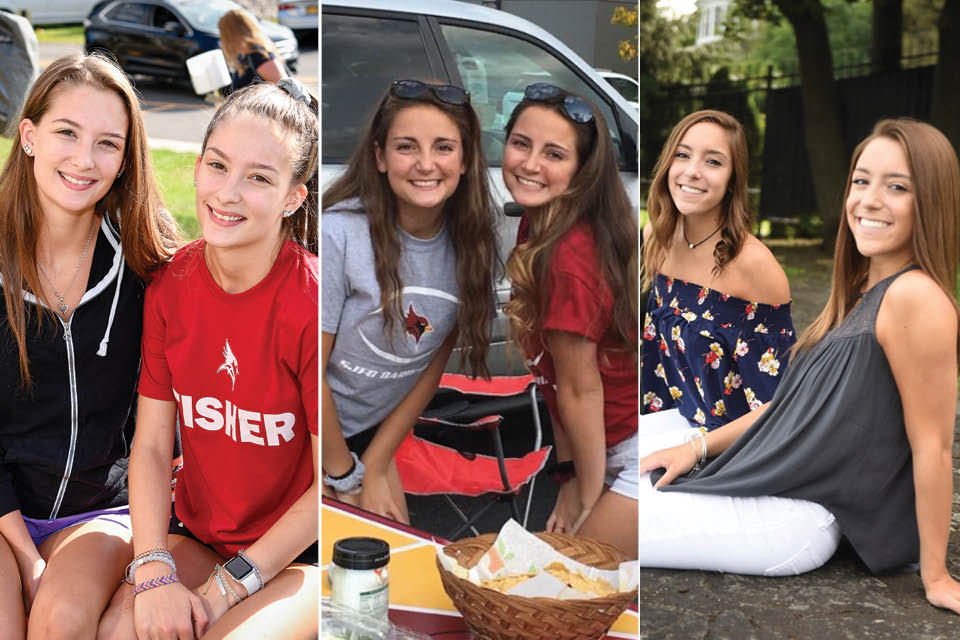 Some siblings share a major. Others are carving out their own individual paths. A few decided to branch out and live with new roommates, while others decided to live together.

“Even though we have our moments, I would not want to room with anyone else,” said Constance Coraci, who shares a room with her twin, Isabella.

Collegium sat down with a few of the Cardinal twins to learn what life is like on campus when you share it with a sibling.

These identical twins (pictured above) from Norwich, New York, are used to being one of many sets of twins. They were one of nine sets of twins in their graduating class of 150 students. “There must be something in the water,” Riley jokes.
Deciding to room together, both came to Fisher to pursue degrees in nursing and are part of the Teddi Dance for Love Committee, Student Alumni Association, and Student Nursing Association. They are often mistaken for each other by coaches and teachers, but say that even some family members cannot tell them apart. While they have never truly switched places, they have had some fun looking so much alike. In high school, one once went to English class for the other, and the teacher did not notice until halfway through the class!

These identical twins from Clifton Park, New York, Julianna and Angelina chose Fisher for the close-knit family atmosphere. The two nursing majors decided not to live together in an effort to branch out and meet new people, which they have done through their involvement in the Teddi Dance for Love committee.

Although identical, they have not experienced cases of mistaken identity - at least not yet. Being very similar in personality and appearance, the Gramuglias find their biggest differences lie in clothing styles, tastes in food, and ice cream flavor preferences. But they say that being identical does have its benefits. In high school, Angelina forgot her sneakers for gym class. Posing as her twin, she asked her teacher for Julianna’s locker combination to borrow her shoes. She pulled it off and wore Julianna’s sneakers for gym class.

These identical twins from Syracuse, New York, are studying inclusive childhood education with a concentration in psychology. They felt not living together would be a good opportunity to grow more as individuals, as they are always together. Both participate in Council for Exceptional Children, Student Activities Board, and the Teddi Dance for Love Committee, while Marissa is also a student ambassador. While they share hobbies and career interests, they recognize their differences in their personalities. Both agree Alaina is more outgoing, while Marissa is quieter and gets her work done early.

They face a case of mistaken identity almost every day, sometimes even by family members. Looking so much alike, the two switched places in seventh grade as an April Fools’ prank. However, the joke was on them. That day, Alaina had forgotten to do her homework, so Marissa got in trouble instead!