The Wegmans School of Pharmacy at St. John Fisher College received a $100,000 gift to fund student travel experiences, including to professional conferences and medical missions, thanks to the generosity of Ludmilla (Lucy) P. Malmberg, nationally renowned pharmacist, educational philanthropist, and entrepreneur. 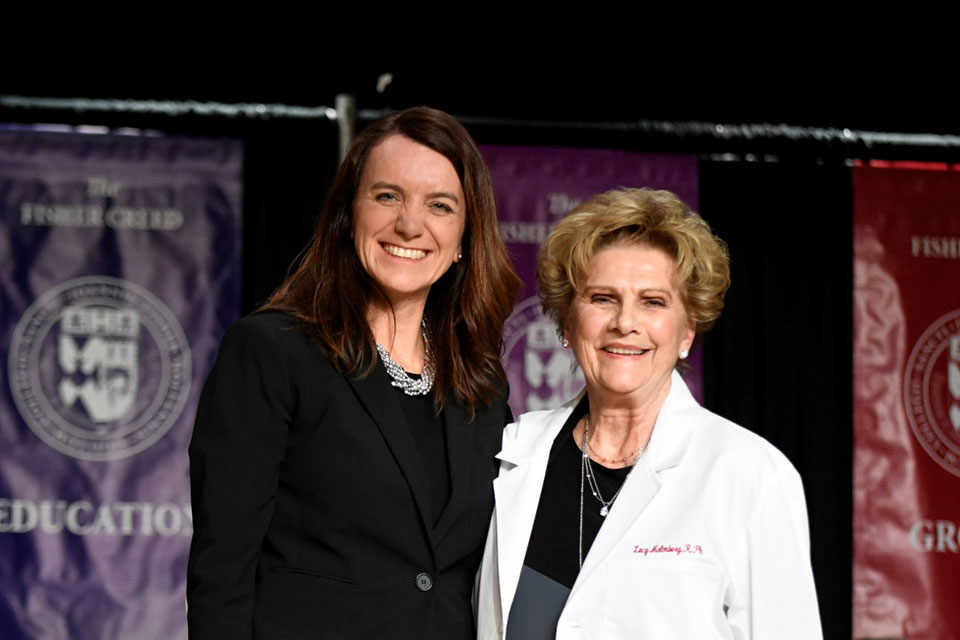 Malmberg announced her gift to the School during the annual White Coat Ceremony, held on Sunday, Jan. 12. She served as the keynote speaker of the ceremony, which officially welcomed first-year students into the pharmacy profession.

As co-founder and current chair of the Board of Directors of Wedgewood Pharmacy in New Jersey, Malmberg helped to transform the company from a local community pharmacy into one of the largest specialized compounding pharmacies in the United States. She has spent her career serving as a staunch advocate for the profession, even arguing successfully before the Supreme Court to protect the rights of licensed prescribers. She is a long-time member of several national and international pharmacy professional associations and serves on the Board of Trustees for the University of the Sciences, home to her alma mater, the Philadelphia College of Pharmacy (PCP).

For Dr. Christine Birnie, dean of the Wegmans School of Pharmacy, Malmberg’s support of Fisher pharmacy students is a full-circle moment in her career. Birnie completed a rotation at Wedgewood while pursuing her pharmacy degree from PCP. Malmberg’s husband, George, co-owner of Wedgewood Pharmacy, served as Birnie’s preceptor. Honed in part by her experience at Wedgewood, her expertise in compounding, coupled with her doctoral training in the area of pharmaceutics, eventually led to a faculty position at Palm Beach Atlantic University and then Fisher. As a founding faculty member of the School, Birnie grew from professor to department chair, and in 2017, she was installed as dean.

A portion of Malmberg’s gift will help grow the endowment of the Dr. Christine R. Birnie Medical Mission/Service Fund, which Birnie launched when she became dean. The gift will also support immediate student participation in international and domestic medical missions and service trips. Each year, the School sends several dozen students to work in health clinics across the globe, including El Salvador, India, Tanzania, and Guatemala. A hallmark experience for Fisher pharmacy students, the trips give students the opportunity to learn cultural competency while serving as a member of a health care team.

“Lucy Malmberg’s commitment to advocacy and broad impact on the pharmacy profession cannot be overstated and we are honored that she has chosen to lend her support to the Wegmans School of Pharmacy,” Birnie said. “Through this generous gift, more of our students will have the opportunity to broaden their professional organization experience and embark on medical missions—transformative experiences they will carry with them as practicing pharmacists.”

In addition to delivering the keynote address at the White Coat Ceremony, Malmberg will meet with Fisher’s chapter of CPFI, members of the School’s faculty, and serve as the Dean’s Hour speaker on Monday, Jan. 13 in Basil 135 at St. John Fisher College.