St. John Fisher College alumnus and Board of Trustees member Victor E. Salerno ’66 has created a legacy of giving at the institution. In recognition of his decades of service to the College, he received the Robert L. Payton Award for Voluntary Service, presented by the Council for Advancement and Support of Education (CASE) at an awards ceremony, held on Monday, Feb. 24, during the CASE District II Conference. 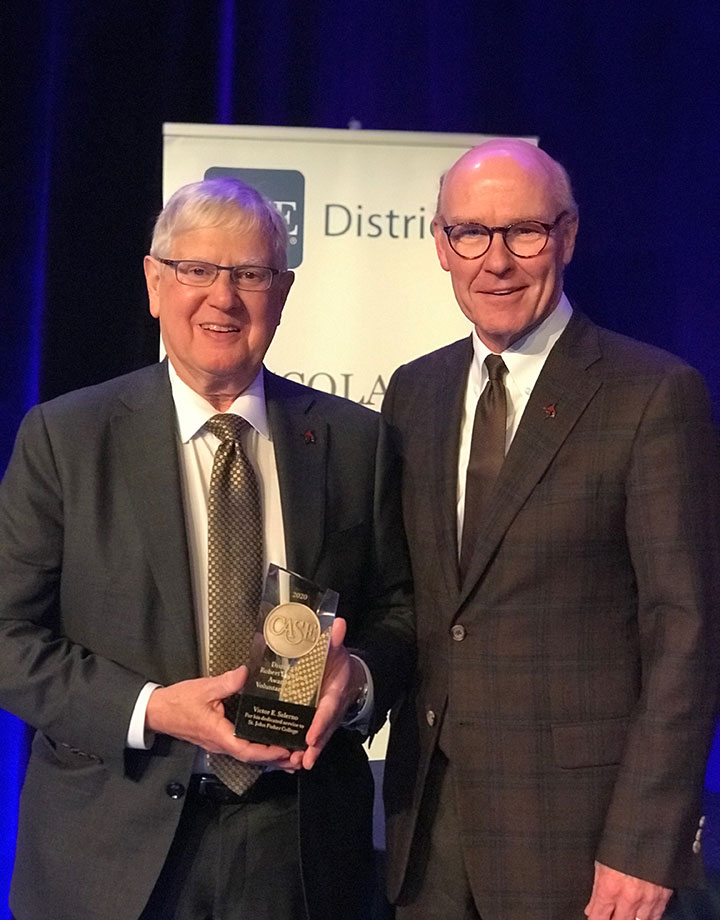 The Robert L. Payton Award for Voluntary Service recognizes an individual who demonstrates leadership in advancement programs, furtherance of the philanthropic tradition, and public articulation of needs, goals, and issues in education. CASE, a global non-profit dedicated to educational advancement, named the award after Robert L. Payton, the first full-time professor of philanthropic studies in the nation.

“Vic is among one of the College’s most loyal alumni, providing constant support and commitment to our mission for more than five decades,” said Dr. Gerard J. Rooney, president of the College. “As a donor, his generosity sets the bar high and as a volunteer, he is often seen on campus meeting with students, sharing his knowledge and best advice to help lead them to lives of purpose. His impact is significant and felt College-wide.”

Salerno, who serves as chief executive officer of O’Connell Electric Company, one of the largest electrical contractors in the country, has maintained a strong relationship with Fisher. He enrolled in the College’s accounting program and since graduating in 1966, has taken on numerous roles as alumnus, volunteer, Board of Trustees Chairman, and has even taught a class or two.

“Fisher, as it turns out, it was for sure my best choice,” Salerno said. “Without the success of the accounting program and all that followed, we would not be in the position we are: where we can pay it forward to the College.”

Proof of his generous commitment to the College is the Victor E. Salerno Center for American Enterprise, home to the School of Business. The building is the fruit of a $2 million gift Salerno and his wife, Eileen, made to the College during its Vision 2020 Campaign.  To date, it is the largest gift ever made to the College by one of its graduates.

“When we are out at events, we will often meet young people who graduated from the School, and they will thank us or mention what a wonderful building it is. That gives us a nice feeling,” said Salerno, who followed that gift with the establishment of the Victor E. Salerno, Sr. Endowed Scholarship.

In September 2019, Salerno was announced as the chair of Fisher Forward, the College’s largest comprehensive campaign, engaging prospective campaign committee members, weighing in on priorities, and participating in leadership gift solicitations.

“I like to say that St. John Fisher College is the bright light on the hill. It does so much good for the community,” he said. “We have alumni in influential roles in every industry around the region and country. It has been an honor to help the College expand its sphere of influence over the past decades.”