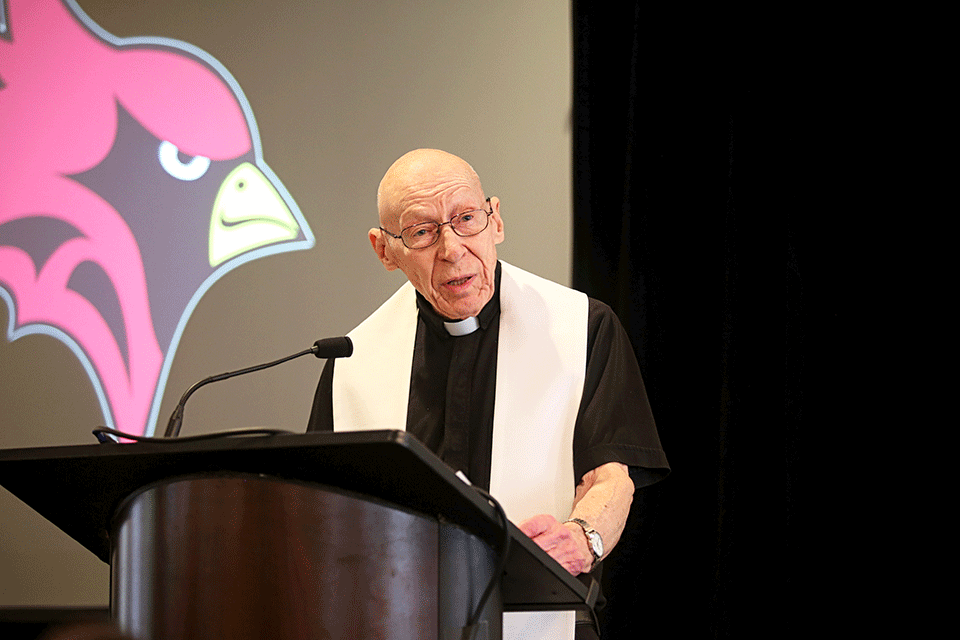 Fr. Al, as he was affectionately known, was a beloved member of the campus community for 25 years. During his tenure, he taught in the Mathematics Department, tutored in the Math Center, and served as the assistant director of campus ministry. He also served as a long-time member of the College’s Board of Trustees before being appointed an Emeritus Trustee upon his retirement from the College and the Board in 2020.

One of the most important roles he played at the College was providing leadership for our sacramental ministries in the interim period between the tenure of Fr. Joseph Lanzalaco and the appointment of Fr. Kevin Mannara as director of campus ministry.  He willingly served wherever he was called, including in recent years at Rochester’s House of Mercy, where he regularly celebrated Sunday Mass for residents.

Fr. Al was a recipient of the President’s Medal for Service to St. John Fisher College at the 2016 Commencement Ceremony. This past June, he celebrated his 60th Jubilee of Ordination to the Priesthood, which was a special day for the Basilians and for Fisher.

Prior to his time at Fisher, he taught math and religion at the Aquinas Institute, where he also served on the Board of Trustees.

Some also knew him as a chaplain for the NTT IndyCar Series, a role he cherished and enjoyed when he wasn’t teaching.

“His faithful dedication to the mission of our founding Basilian Fathers and his commitment to fulfilling his calling as part of that mission have been a blessing to all in our campus community. Fr. Al will be deeply missed,” said President Rooney in a message to the campus community.

A private Funeral Mass will be celebrated in the Hermance Family Chapel of St. Basil the Great on Saturday, Feb. 13, at 10 a.m. You can view the livestream of Fr. Al's Mass at the link below.