Awards Recognize Excellence within the School of Pharmacy

Students, faculty, and staff from the Wegmans School of Pharmacy celebrated a successful academic year during their annual awards program held on Thursday, April 28. Award and honor recipients were recognized for their hard work and dedication to the pharmacy field. 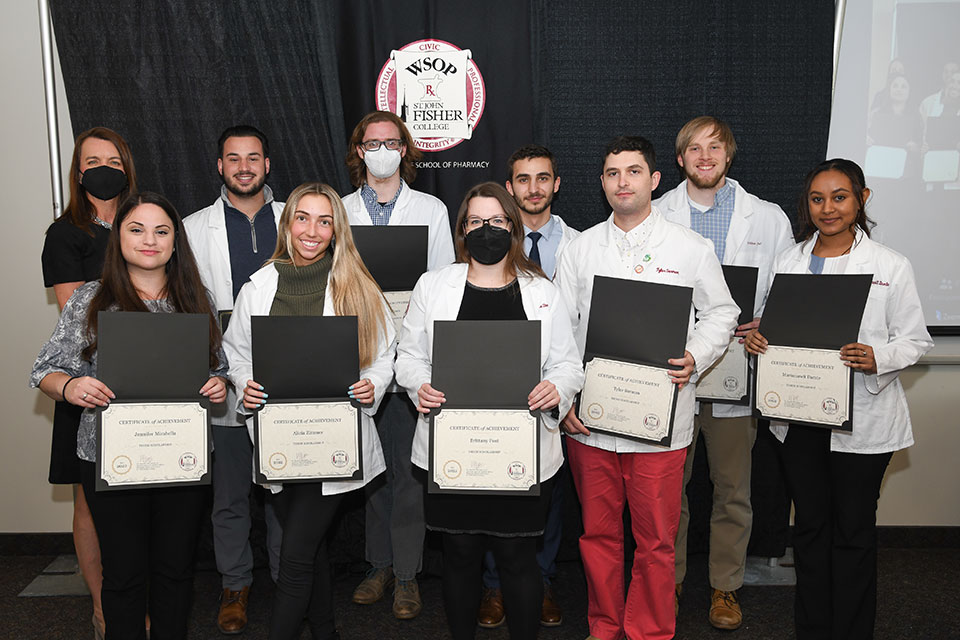 James Marsala, Bailey Soper, Tanner Buchanan, and Katherine Leaty received the Swigart Scholarship given in memory of Dr. Scott Swigart, founding dean of the school. The scholarship recognizes students who are in good academic standing, demonstrate leadership abilities, and are involved in activities within the School, community, church, or civic organization, or work full- or part-time.

The Thomas and Eileen Hogenkamp Scholarship was presented to Prince Ohemeng. The scholarship is given to a full-time first-year student who has worked hard and shown effort in making the world a better place. Recipients are also selected based on a written essay that discusses their pharmacy career goals.

Victoria Wyman was given the Deborah A. Steimle Woodard Award, honoring Deborah’s life, values, and spirit of giving to others throughout her pharmacy career.

The Burcroff Memorial Scholarship provides support to an incoming first-year pharmacy student who shows great promise in their pharmacy studies on the basis of their admissions portfolio. This year’s recipient was Vincent Ibezim.

Karnjit Brar, Teresita Muniz, and Aladin Zukic received awards given by CVS Pharmacy. They were recognized for their academic achievement, interest in the community pharmacy practice, and time spent working as an intern or volunteer with an organization that supports underserved populations.

Laura Candelas Batista and Khaled Numan-Ali were given the Walgreens Diversity and Inclusion Excellence Award, which recognizes students with an interest in community pharmacy who either embrace diversity and promote inclusion initiatives on campus or represent an underrepresented group. Ivan Valodzka and Karnjit Barr were given the Walgreens Multilingual Scholarship, which recognizes students who are fluent in speaking one or more languages in addition to English with an interest in community pharmacy.

Christopher Ryan was awarded a scholarship from Bank of America.

Sarah Masri and Hannah Fifield were recognized for their significant achievements at the local and national American Society of Health-System Pharmacists Clinical Skills Competition. Jeremy Hairfield was honored for winning the local American Public Health Association’s Counseling Competition and representing the School at the national competition. Nicole Eckert was selected by the New York State Area Health Education Center to participate in its Scholars Program from 2022–2024.

During the ceremony, the School also recognized exceptional faculty members and preceptors.