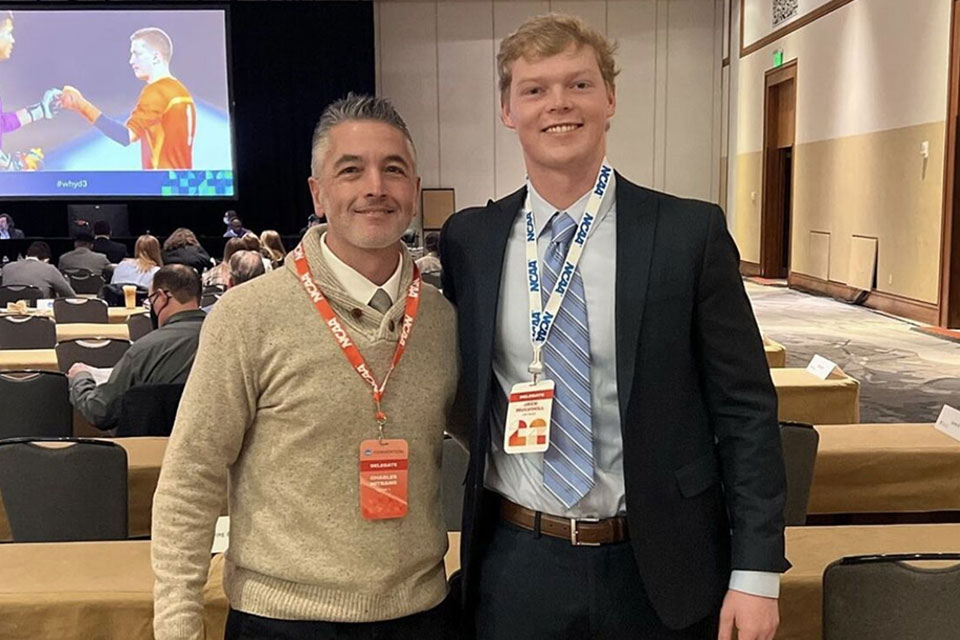 The NSAAC is a collective group of student-athletes, one from each conference, who work to promote opportunities, enhance the experience, and speak for all DIII student-athletes on NCAA items like legislation. They also work to promote involvement in the Special Olympics, volunteering, and working toward creating better mental and physical health and inclusion throughout the division.

This trip was the first time that the committee was able to be in person since the beginning of the pandemic. The NCAA Convention is the biggest event of the year where different legislative proposals are voted on, and this year, a new NCAA constitution. The NSAAC group arrived in Indianapolis on Monday to prepare for the two meeting days of NSAAC, where they went over conference initiatives, and a larger review of nine proposals that were to be discussed Saturday morning.

At the event, Mulvihill and the committee additionally prepared position papers about each legislative proposal. Throughout the week, they attended different ceremonies and special events that highlighted past NCAA athletes that have made massive contributions to NCAA athletics. Some of these athletes included Mac Jones, Tim Duncan, and Gail Kozaira Boudreaux, a Theodore Roosevelt Award Winner.

While attending, Mulvihill also participated in the Division III Management Council meetings as an NSAAC representative speaking directly with presidents, athletic directors, and NCAA staff within the council. During the session, he presented student-athlete perspectives to shed light on specific topics while working with leaders to back up statements.

Mulvihill also attended events involving the Special Olympics to speak with other student-athletes on how to get more involved with the organization- in their respective region.

During the Issues Forum on Thursday, discussion revolved around the newly adopted constitution that updates the NCAA’s philosophies and structure. Mulvihill said the student-athlete voice was  heavily emphasized. The Board of Governors in the NCAA was trimmed from 21 to 9 seats, and one of those seats was filled by a former student-athlete, an historic scenario.

In Saturday's business session, the final day of the convention, Division III ran through their nine proposals and adopted seven of them. Mulvihill had the privilege of speaking on a proposal sponsored by the Empire 8 Conference, which will continue to be reviewed. Each proposal was presented individually, and membership would then take time to discuss their positioning and rationale. Once everyone who wanted to speak on the issue finished, a vote took place. One member of the NSAAC committee spoke on each proposal and made sure that the student-athlete voice was being heard.

“It was an amazing experience. Meeting the other student-athletes on the committee was really special as we created such close friendships in a very short amount of time,” Mulvihill said. “While we are all from different places around the country, I know that we will always have a close connection.”

This article was written by Sal Saunders ’23, an executive intern to the office of marketing and communications. Saunders is a marketing major with a minor in sports management.