St. John Fisher College has appointed Rev. George T. Smith, CSB, as the institution’s William and Helen Cavanaugh Chair of Catholic Studies in the School of Arts and Sciences. Smith is the first Basilian but second priest to be appointed to this role; he succeeds Rev. William Graf, who served as a member of the Fisher faculty for 37 years including as chair of the Religious Studies Department before his retirement in 2020. Smith will officially begin his role on September 1. 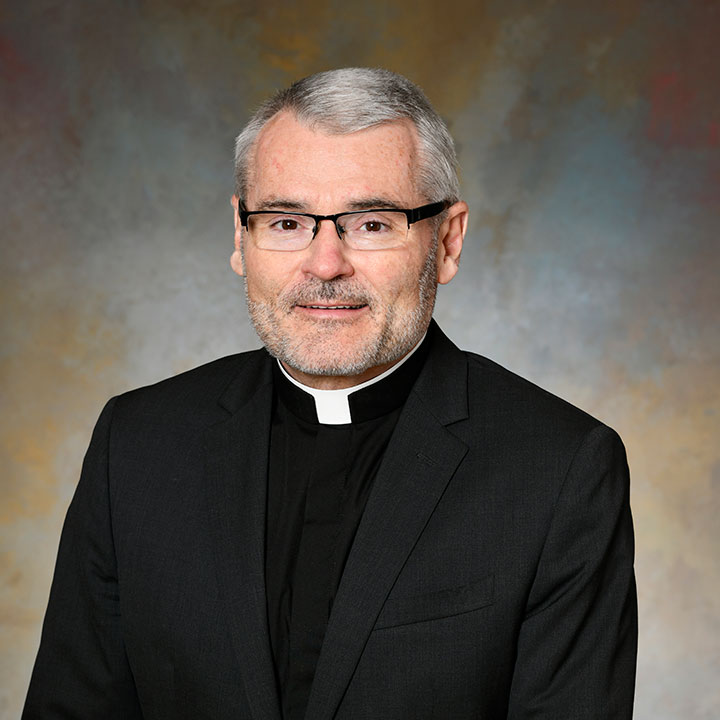 The William and Helen Cavanaugh Chair of Catholic Studies was developed in 2003 and was made possible thanks to a leadership gift to the College from the late Rev. John R. Cavanaugh, CSB in memory of his parents. The chair position assists the College in developing Catholic Studies within its current religious studies curriculum, as well as contributes to curriculum discussions broadly at the College, both of which are consistent with the mission of the College and with that of its founders, the Congregation of St. Basil. Cavanaugh joined the Fisher faculty in 1956, and continued to be active in campus life until his death in 2007.

“Father Smith’s life of service and faith embodies and models best the motto of our Basilian Founding Fathers – ‘Teach me goodness, discipline, and knowledge,’” said President Gerard J. Rooney. “His service to the College, in particular, demonstrates his belief in our mission and his commitment to students. I am looking forward to his continuing contributions to the broader campus community.”

Following one year spent at Fisher from 1991-1992, Smith, who also serves as a Trustee at the College, has held positions of leadership in education and the Catholic Church for the last 30 years. From 1992-1997, he served as president of St. Joseph’s College at the University of Alberta. During this time there, he was elected to the position of chair of the Association of Catholic Colleges and Universities of Canada. From 2000 to 2010, he served as president of St. Thomas More College at the University of Saskatchewan. In 2010, he was elected superior general of the Basilian Fathers, and was re-elected to a second four-year term in 2014. From 2018-20 he served as interim dean of the faculty of theology at St. Paul University in Ottawa and since July 2020, has held the post of interim dean of the faculties of human sciences and philosophy also at St. Paul.

In addition, Smith has served on over 15 governing boards during the last 30 years. Currently, he is chair of the Board of Trustees of the Toronto School of Theology at the University of Toronto. He is also the founding chair of Presentation Manor for Seniors, a 225-unit Catholic retirement residence for independent and assisted living in Toronto.

“Father Smith comes to Fisher wonderfully prepared to make significant contributions to our curriculum and to our students’ success,” said Dr. Kevin Railey, provost of the College. “His concern for the intellectual and spiritual well-being and development of our students will have a definite impact on their lives.  I look forward to welcoming him to campus in this role.”

“What a great honor it is for me to serve the Fisher community in this new and exciting way. I am enormously grateful to President Rooney, Provost Railey, and Dean Fallon for their warm and generous welcome,” said Smith.