The St. John Fisher College Department of Athletics is honored to announce that nine new members will enter the Hall of Fame Class of 2022. The new members will be officially introduced during a special ceremony held in fall 2022; details about the event will be announced in the coming months. 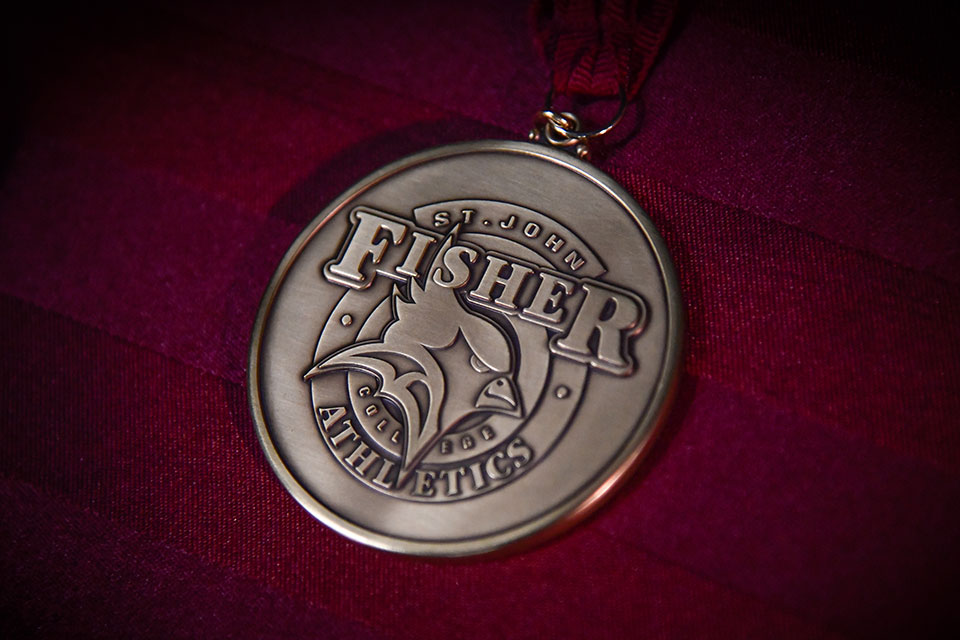 Justin D’Amato ’14 is recognized not only as one of the best pitchers in the Fisher baseball program’s history, but in the history of Division III baseball. D’Amato is a six-time All-American, four-time All-Region, four-time All-Empire 8 selection, Empire 8 Rookie of the Year, and a back-to-back Empire 8 Pitcher of the Year. The Canandaigua native first stepped onto Dugan Yard in 2011 and outperformed expectations year after year. D’Amato finished his illustrious career with a 36-5 overall record and a 2.11 career earned run average. To date, he ranks first all-time in program history in innings pitched (276.2), strikeouts (325), earned run average (2.11), wins (36), and games started (47). At the time of his graduation in 2014, D’Amato ranked ninth all-time in Division III in wins and surpassed MLB legend Billy Wagner for 19th place on the all-time strikeout list in D3.

Steve Karnyski ’12 is one of the most decorated athletes to ever play for Fisher’s baseball program. He is a two-time Empire 8 Player of the Year, a four-time All-Conference selection, and a three-time All-Region honoree. The Lancaster native was named New York Region Player of the Year as well as a unanimous First-Team All-American selection in his senior season (2012). Karnyski was not only a tremendous athlete, he was a scholar as well, earning the Academic All-American by the College Sports Information Directors of America Award twice. On the diamond, he is just one of seven players in program history to eclipse 200 hits; his 205 hits put him sixth all-time. During his career as a Cardinal, Karnyski batted an outstanding .383 (10th all-time), scored 144 runs (fifth all-time), produced 45 doubles (tied for fifth all-time), 16 home runs (sixth all-time), and 126 runs batted in (sixth all-time). A team player, Karnyski’s 15 sacrifices is the most in program history, while his 40 career stolen bases is good for eighth all time.

Vito Sciscioli ’65 was a key member to the long-term success of the men’s soccer program. A two-time All-American for the Cardinals, he was a building block for Fisher’s early years. When on the pitch, Sciscioli led the Cardinals to a 14-7 overall record that includes back-to-back seasons with a 6-2 mark. Sciscioli was named Honorable Mention All-American by the United Soccer Coaches of America in 1963 and again in 1964.

Tyler McArdell ’12 is one of the top golfers to ever don the Cardinal Red and Gold. McArdell is a three-time First-Team All-Conference, 2008 Empire 8 Rookie of the Year, two-time Empire 8 Player of the Year, and two-time All-American. The Baldwinsville native led the Cardinals to three Empire 8 championships during his career, and played in the NCAA Division III Championship twice. To date, McArdell ranks seventh all-time in program history in scoring average at 76.4 while his seven wins over 34 career tournament appearances is the fourth most in team history.

Lauren Glavin ’10 was a vital member to the women’s lacrosse team from the first time she stepped on the field in 2007. A four-time All-Conference honoree and Empire 8 Rookie of the Year (2007), Glavin led her team to two NCAA appearances during her career. The Syracuse native finished her incredible career producing 185 goals, 82 assists, and 267 points over 75 games. To date, Glavin still ranks third all-time in both goals and points, as well as fourth all-time in assists, and eighth in ground balls (167). Upon graduating from Fisher in 2010, Glavin ranked first on the single-season list for goals with 51 in addition to holding the top two single-season point totals with 78 in 2009 and 68 in 2010. With Glavin on the field, Fisher was able to produce 41 wins, and capture the Empire 8 championship twice including the program’s first in 2007.

Cassandra Camille ’96 was a brilliant offensive and defensive athlete for the women’s volleyball program during their successful run in the 90s. Camille helped lead the Cardinals to a combined 122-51 record (.705) during her four years. Upon graduating in 1996, she was the all-time leader in aces with 171 and second in digs with 1,727. Camille had an incredible senior season where she produced 460 digs, 264 kills, and 49 service aces. To date, she ranks fourth all-time in both aces and digs.

In 1969, Dan O’Connor, Bill Brown, and Joe Hazard got together in nearby Murray Hall behind where Growney Stadium now sits and began to lay the foundation for a football program at St. John Fisher College. Over the next two years, they worked diligently to organize and fundraise for what would become the first-ever football season for St. John Fisher College. This process would not be easy, and the trio encountered numerous challenges along the way. They persevered through many obstacles and on October 2, 1971, Fisher football played its first game. Since that game 50 years ago, Fisher football has won nearly 280 games, captured three club football national championships, claimed six Empire 8 Championships, and reached the NCAA Championship five times including three runs to the Elite 8 and one trip to the Final Four. Additionally, Fisher has been awarded the Lambert Meadowlands trophy twice as the top team in the region. Without the tireless efforts and contributions from Brown, O’Conner, and Hazard, Fisher football wouldn’t enjoy the success, fundamental growth, and rich history that it has today.