The School of Arts and Sciences at St. John Fisher College celebrated its master’s and baccalaureate degree candidates during a Commencement ceremony on Friday, May 6. 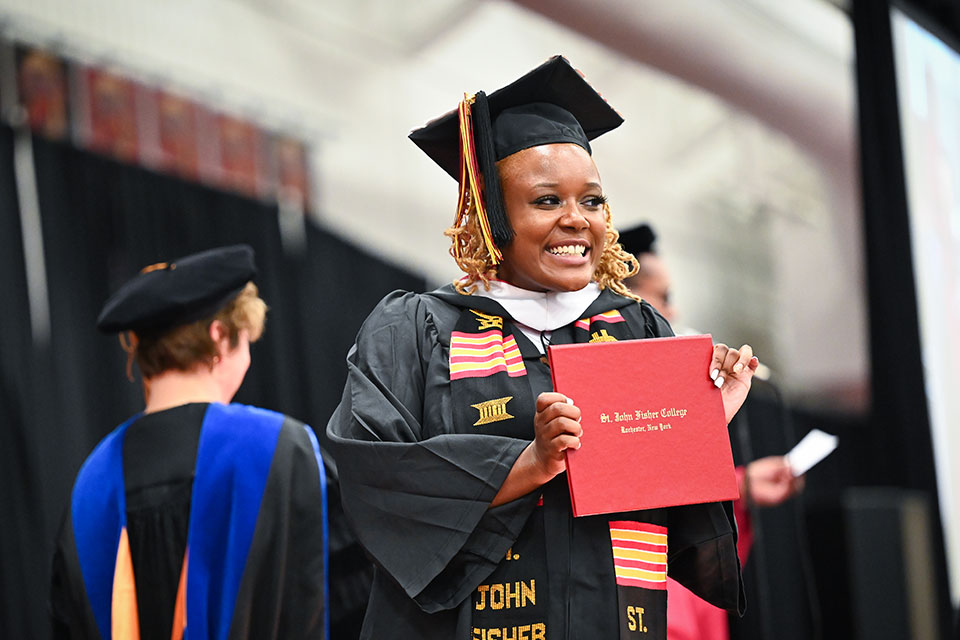 Outgoing Board of Trustees chair Diana Nole received an Honorary Degree of Doctor of Humane Letters and delivered the keynote address during the ceremony.

Nole, who is the executive vice president and general manager of the healthcare division of Nuance Communications, has been a member of the Board since 2010. In 2020, she became the first female in the College’s history to serve in the chair role, bringing with her several decades of experience in executive and leadership positions. Her tenure at the helm of the Board began in the heart of the COVID-19 pandemic, coinciding with one of the most challenging moments for the College.

Nole and her husband, Angelo, have a legacy of giving to Fisher; they are inaugural members of the Spire Society, the College’s giving society, at the Presidential Level. As Board chair, Ms. Nole has been a champion of the Fisher Forward campaign and has inspired fellow Board members to establish their own philanthropic efforts at the College. In 2021, the Noles created an endowed fund for the Fisher Urban Scholars Award, ensuring the program’s longevity through a $200,000 gift. 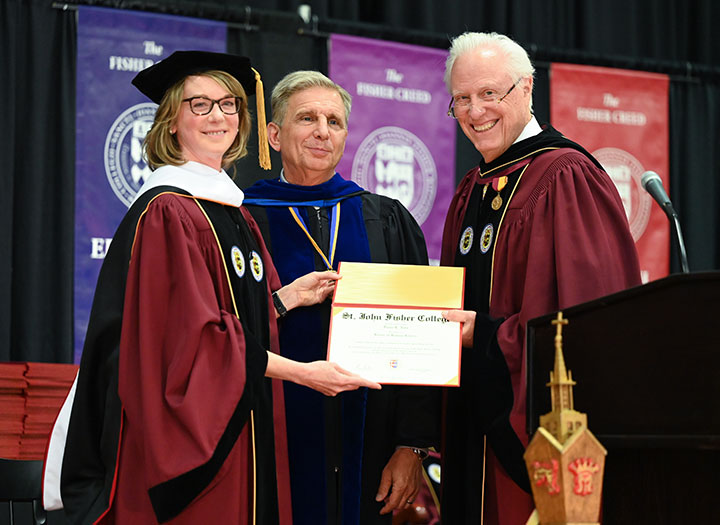 “St. John Fisher College is an amazing college that I have truly come to love and respect over these 12 years that I have served on the Board of Trustees. It is a college that continues to build on its foundation while evolving for the future. This is indeed an honor,” she said.

She also offered the graduates words of congratulations and advice. “True knowledge is born out of having curiosity—a true interest in constantly learning each and every day—and also sharing your knowledge with others,” she said. “Just like you have done to get to this point—apply it and share it—and not only will you do well for yourselves, you will contribute to making the world a better place.”

Two members of the faculty were also honored at the ceremony. Dr. Tim Franz, professor and chair of psychology, was given the Trustees’ Distinguished Scholar Award, which is given to faculty members in recognition of outstanding scholarly achievements. This award is the highest honor that the Board of Trustees can bestow on a faculty member, second only to an honorary degree. As an organizational consultant, Franz is a recognized expert in applied research in organizations, individual and team decision making, improving team performance, improving team leadership, and using teams to drive organizational change. Many of his ideas about improving teams are published in his four books, including his most recent, Meaningful Partnership at Work: How the Workplace Covenant Ensures Mutual Accountability and Success Between Leaders and Teams. Franz has also authored two book chapters, 26 scholarly research articles, and over 30 professional articles, contributing to both academic and professional journals. In addition, he has presented at nearly 40 conferences and has led well over 100 professional workshops. His work has been featured in numerous online media outlets and national podcasts, and he is regularly called upon to serve as an expert by national and local media.

Dr. Maryann Herman, associate professor of biology, was given the Undergraduate Faculty Award for Teaching Excellence. In a letter nominating Herman for the award, one student wrote, “Dr. Herman is one of those professors that teaches the content they need to while being a genuinely kind, caring, and supportive person. Dr. Herman has also clearly spent the time and done the work to learn how to teach; she doesn't just spout her knowledge, she figures out how to get each student to understand the deeper meaning of what she does.”

Another student added, “Dr. Herman celebrates any and all participation, allowing her students to feel safer taking risks and answer before they are positive that they are right. Even when a student gives an answer she was not expecting, she is sure to praise that answer and work to make sure that she figures out a way to incorporate it into the notes somewhere. She cultivates a safe space for students that are different because she is a safe person. Dr. Herman is genuinely the best professor that I have had at Fisher.”