St. John Fisher College students Cassidy Wing ’24 and Kurt Schultz ’23 had the opportunity to infuse new creative thinking through use of their iPads and had a fresh take on what the study of Shakespeare can look like. 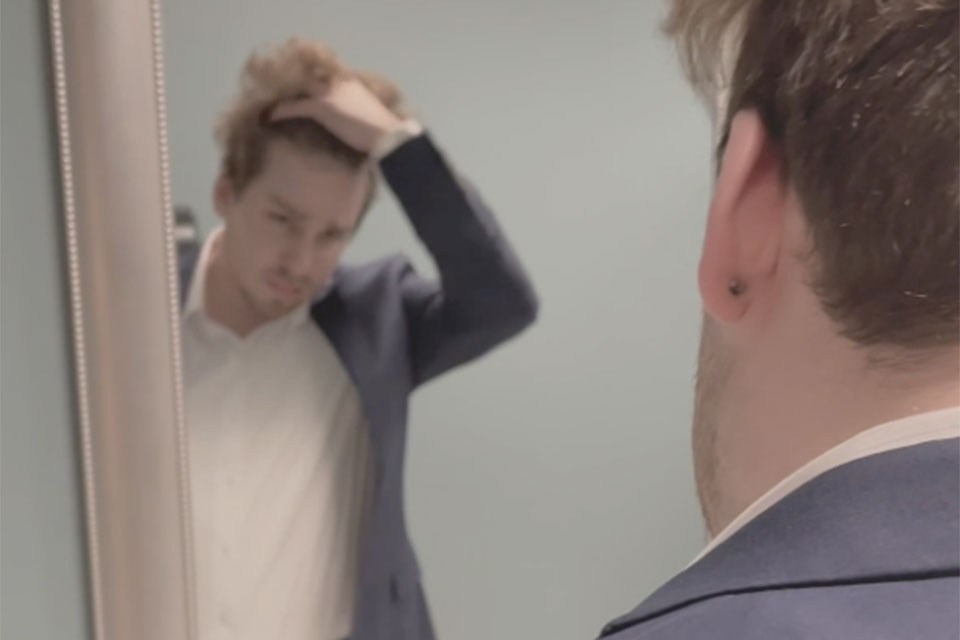 When Dr. Jonathan Shelley, assistant professor in the English Department, joined the Fisher faculty last semester, he took the opportunity to integrate iPad technology into his course, Shakespeare on Film, a course that fulfills a requirement for English majors. Shelley asked students to combine an assigned shot type with a scene from one of Shakespeare’s plays.

“The assignment itself was really unique because I’ve never really had the chance to make something creative like that,” said Wing. Many students who are not incorporating the arts into their studies will likely never get an opportunity to explore how it can impact their own fields. As an adolescence education major with a concentration in English, this assignment diverged from Wing’s usual learning.

Shelley also commented on the way his field has changed from its traditional practice, saying that “if you’re teaching English now, you’re thinking about composition in different types of media, many different modes. Not just written, but also visual, sound, electronic media.” The iFisher: Next Generation Learning Initiative has allowed for this type of composition for Shelley’s students.

Both hardware and software were crucial to this assignment. Schultz, who chose to do his project on Titus Andronicus, used only the singular iPad camera and iMovie editing software to show the difference between both characters. Schultz and his brother played the Andronicus brothers, characters who differ greatly. Using a split frame, the two characters were equally represented.

“We had to get creative with only one camera, and we did it in a way where it was a complete juxtaposition of two characters in two different circumstances showing how they would interact. He’d walk up to the stage all calm and collected, I’d walk up slouching with an attitude,” Schultz said.

The choices allowed by equal access of technology made all the difference. “The students having a camera allows them to be these creators who can try out creating these kinds of emotional feelings with this particular hardware,” Shelley said.

“The greatest potential of the technology lies in the way that the iPads allow students to do things outside of the classroom.”

He added that since film can show students how to look at something in ways that a live stage play may not, he wants students to have a hands-on understanding of the technical aspects of film, and the iFisher initiative, make that possible.

Schultz still thinks about the impact of this class. “Dr. Shelley’s class is part of my tour route as a tour guide and when I talk about the assignment, new students get so excited about that,” he said.

Wing hopes to see other project opportunities like this for students.

“I really think that it would be helpful if professors paid more attention to the kind of thing that Dr. Shelley was doing with this project: giving students the opportunity to create something other than straightforward lectures and papers,” she said.

Who knows what else the iPads will bring?

This article was written by Marcus Lindenburg ’23, an English major, who is a PR writing intern with the Office of Marketing and Communications.