This summer, Dr. Dianne Cooney Miner will retire from her role as founding dean of the Wegmans School of Nursing and transition full-time to her role as executive director of the Golisano Institute for Developmental Disability Nursing. 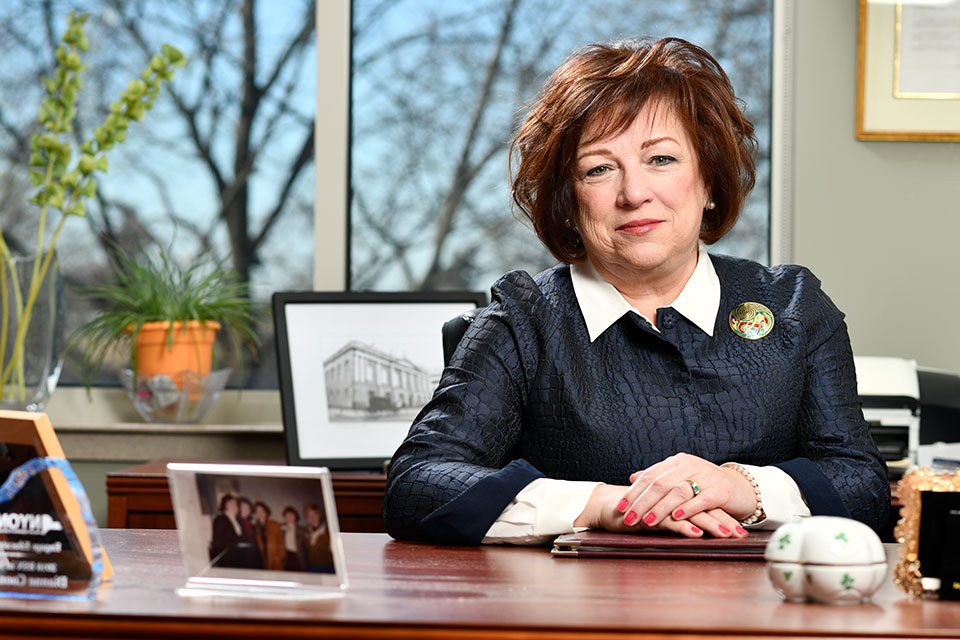 To recognize and honor her visionary leadership and extraordinary impact on the College during her tenure as dean, the Board considered and approved a motion to bestow the lifetime honorary title of Dean Emeritus upon Cooney Miner.

Her retirement as dean follows a long, illustrious career at the College. In 2003, Cooney Miner became the chair of Fisher’s Department of Nursing, and in 2006, the founding dean of the School of Nursing.  In recognition of her commitment to advancing Fisher’s work in the community, as well as her leadership in the community, she was appointed associate vice president for community engagement in 2015 – the first to serve in this position at the College.

She has transformed the undergraduate and graduate offerings at Fisher, overseeing the introduction of several new master’s and doctoral programs and the College’s first fully online program, all of which have earned accreditation from national accrediting bodies. During her tenure as dean, she has secured millions of dollars in grant funding not only for the School and its programs, but for the many community organizations and partners involved with the School.

Her scholarly research has been published in dozens of professional medical journals and health care publications, and she is regularly called upon by local, regional, and national media as an expert in the field of nursing. For over 20 years, Cooney Miner has served on a variety of boards in capacities including chair, co-chair, and member. A long-time appointee to the New York State Board for Nursing, she serves on the Board of Directors of Rochester Regional Health, The Children’s Agenda, and The Children’s Institute, and as a convener of Roc the Future.

Her list of honors and awards runs long, and includes accolades from Syracuse University, the New York State Organization of Nurse Executives, the Foundation of New York State Nurses, and the American Academy of Nursing. In 2015, she was named a faculty fellow in nursing and midwifery by the Royal College of Surgeons in Dublin. The highest honor the faculty can bestow upon an individual, the fellowship recognizes outstanding service to the nursing/midwifery profession and significant humanitarian work. She was also inducted as a faculty scholar by the Waterford Institute of Technology in 2018.