Diana Nole to Serve as First Female Chair of St. John Fisher College Board of Trustees

St. John Fisher College has announced that Diana Nole, chief executive officer at Wolters Kluwer Health, has begun her tenure as chair of the Board of Trustees and is the first female to serve in the chair role in the College’s history. Formally vice chair, she has succeeded Jack DePeters ’73, who completed his two-year term as chair on May 8. 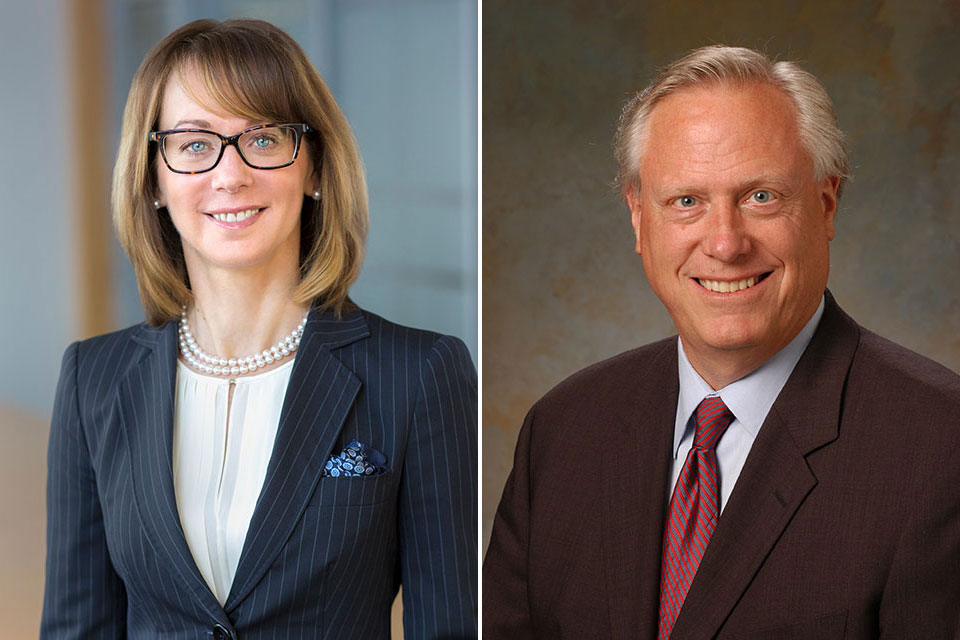 Stepping into the vice chair role is Tom Bowles ’71, who has served on the Board since 1993. The Board of Trustees determines the general, educational, and financial policies of the College. In addition, the Board has responsibility for sound resource management of the institution and works closely with the president in planning the strategic direction of the College.

“I am very grateful to Jack DePeters for his dedicated and exemplary service to the Board during his tenure as chair. His leadership, mentorship, integrity, and steady focus enabled us to continue to work towards the betterment of our institution each and every day,” said President Gerard J. Rooney. “Diana Nole’s appointment as the first female chair is historic for the College, and I look forward to continuing to work with her in this role and to building on her significant leadership contributions, business acumen, and Board service to date. Tom Bowles’ dedicated commitment to his alma mater through his decades long service on the Board of Trustees is also to be commended and the College will benefit from his continuing leadership in the role of vice chair.”

Nole brings the chair role several decades of experience in executive and leadership positions. At Wolters Kluwer Health, a leading global provider of clinical technology, Nole has instilled a customer-first philosophy that delivers innovative solutions to improve the quality and cost of health care. Wolters Kluwer Health solutions support more than 2.5 million clinicians in 187 countries and educate over 1 million medical and nursing students. Under her direction, the company has specifically focused on: user experience, decision support, disease detection, advanced workflows, and analytics. On June 1, Nole will become the executive vice president and general manager of the healthcare business of Nuance Communications, a global pioneer and leader in conversational AI innovations that amplify human intelligence to increase productivity and security.

Prior to joining Wolters Kluwer Health, she served as president of Carestream’s Medical Digital division, a global leader in medical imaging systems. During her tenure with the company, she led the development and introduction of the breakthrough wireless x-ray detector, DRX-1, and mobile x-ray solution, DRX-Revolution, all of which gained market leadership positions. In recognition of her accomplishments, she was named to the Rochester Business Journal’s “40 Under Forty” list (2002), a finalist for both the Athena Award (2012) and Technology Woman of the Year (2013), and included in Becker’s Health IT “Female Health IT Company CEO’s to Know” (2016).

A recent retiree, Bowles built a career as a turnaround CEO in the branded consumer products space focused on medium-sized, public, and private businesses in cash constrained, distressed situations. For the past 15 years, his emphasis has been on distressed portfolio companies of private equity firms.

From 2011 to 2016, he served as CEO and chairman of Enesco, a giftware, fashion accessories, and plush toy business behind some of the world’s most recognizable brands, including Gund Teddy Bears, Walt Disney, Sesame Street, Boyd’s Bears, The Grinch, and approximately 100 other properties. There, he built a new senior leadership team, led the drive for new growth, stimulated profitability, and implemented a new “trust-based” corporate culture initiative.