Fisher Mourns the Passing of Fr. Joseph A. Trovato, CSB

It is with deep sadness that St. John Fisher College shares that on Monday, July 20, Fr. Joseph A. Trovato, CSB, passed away after a brief illness. He was 90 years old. 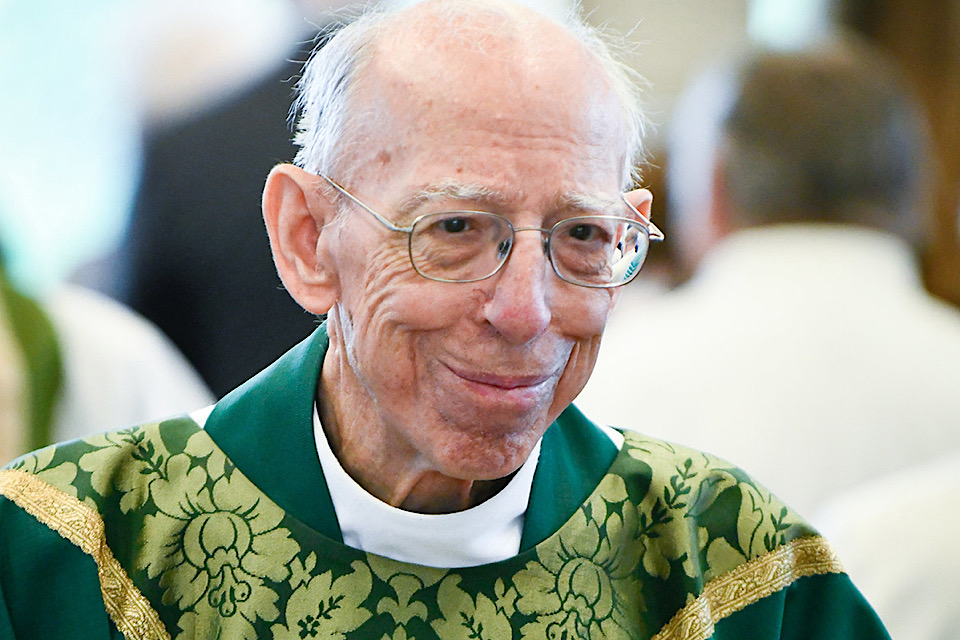 Fr. Trovato was a beloved member of the St. John Fisher College community. He was the College's first director of Campus Ministry, and the longest to serve in that role from 1959-1989.

A native of Rochester, Fr. Trovato attended grammar school at Holy Redeemer Parish, and was a graduate of the Aquinas Institute. He went on to study at St. Basil's Seminary in Toronto and was ordained a Basilian priest in 1956. He earned his theology degree from St. Michael's College in Toronto, and bachelor's and master's degrees from the University of Toronto.

In 1959, Fr. Trovato joined the faculty at Fisher as a professor of Italian. He was also appointed as the College's first Chaplain. In 1964, he succeeded Rev. Charles Lavery as superior of the Basilian community, responsible for the religious lives of the priests serving at the College. He spent 30 years at Fisher, working closely with students in his roles as both professor and campus ministry director. During his tenure at the College, he married countless Fisher alumni, and baptized countless future Cardinals.

Fr. Trovato also served as a member of the College's Board of Trustees for 25 years. In his role as trustee and member of several committees, he worked tirelessly to advance those issues of importance to the Board and the College. He could always be counted on to provide an informed and compassionate point of view, regardless of the subject matter. He also served as an Emeritus member of the Board of Trustees.

In 1989, he joined Christ the King Parish (now Saint Kateri) in Irondequoit as the senior priest-in-residence, a position he held for 30 years. In addition, he served several terms on the General Council of the Basilian Fathers.

In recognition of his dedicated service to the Fisher community, the College bestowed upon Fr. Trovato a President’s Medal during the 2008 Commencement Ceremony.

In 2016, as he celebrated the 60th anniversary of his ordination to the Priesthood, Fr. Trovato told the Catholic Courier that his life of service had been a blessing:

“It's been a beautiful life, and I am most grateful to God for bringing me to this life. It's been a real gift,” he said in the article. “I wish everybody could be as happy as I've been in my vocation.”

During the 2019 Alumni and Family Weekend, thanks to a generous gift from the Theodore and Cashmere M. Mendick Foundation, the College dedicated the Fr. Joseph A. Trovato, CSB Campus Ministry Center in his honor. It was a beautiful ceremony and a touching way to honor a man who has dedicated so much of his life to the priesthood and to the College.

In February, hundreds of Fisher alumni, students, faculty, and staff celebrated Fr. Trovato's 90th Birthday Celebration and Mass. It was a joyous occasion and we are blessed to have been able to share with him how his ministry and spirit affected those he served. And each year, the Ethics Minor program hosts the Joseph A. Trovato Lecture featuring a distinguished community leader or scholar who shares Fr. Trovato's commitment to peace and social justice.

"He impacted the lives of literally thousands of Fisher students, and continued to impact them in their lives as loyal Fisher alumni. His humble service and gracious spirit reached many, and he spread much goodness, discipline, and knowledge. Many called him the saint among us – a perfect description of a faithful and disciplined servant," said Dr. Gerard J. Rooney, president of the College. "His extraordinary commitment to the College and his work on behalf of every campus constituency has benefited the entire Fisher family, as well as the greater Rochester community. It has been our honor to have worked alongside him."

As funeral arrangements become available, the College will share them with the campus community. Please keep Fr. Trovato's family, friends, and Basilian confreres in your thoughts and prayers during this time.