St. John Fisher College Welcomes Two New Members of the Board of Trustees

Two St. John Fisher College alumni have joined the College’s Board of Trustees. Daniel J. Boyce ’79 and Michael F. Stapleton, Jr. ’98 began their service at the spring Board of Trustees meeting. 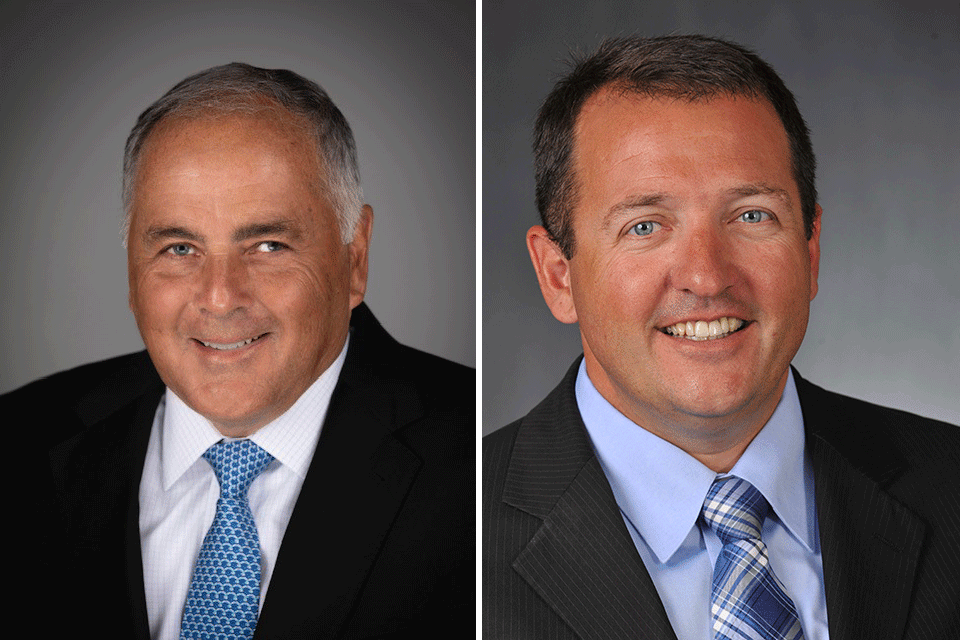 “I am pleased to welcome Dan and Michael as our newest Trustees,” said President Gerard J. Rooney. “Their contributions to the College as alumni have been invaluable. They each bring a level of expertise to the Board that will contribute positively to our efforts to continue to move Fisher forward.”

A general practice attorney, Boyce founded the Law Office of Daniel J. Boyce, Esq. in 1998, concentrating in maritime law and civil litigation. A 1979 graduate of the College, he also holds juris doctor and master of laws degrees from Temple University School of Law, where he served as an adjunct professor in the Department of Legal Studies at the Fox School of Business.

Boyce and his wife, Shelley, created the Boyce Family Endowed Scholarship in 2020. They have also funded scholarships and research at the University of South Carolina, University of Virginia, and the University of Delaware, where their daughters are alumnae. Boyce currently serves as a member of Temple’s Owl Club executive board, which supports the University’s athletics program, and in 2018, the University opened the Dan and Shelley Boyce Track at the Temple Sports Complex in honor of their philanthropy.

A 1998 graduate of the Wegmans School of Nursing, Stapleton is president and CEO of UR Medicine Thompson Health, an appointment he has held since 2012.  The non-profit health care system, which boasts more than 650 practitioners and 1,800 associates, provides a full range of services for more than 215,000 people in the greater Finger Lakes region. Under his leadership, Thompson has received a number of recognitions, including several distinctions from The Joint Commission, which is the premier healthcare quality improvement and accrediting body in the nation. Stapleton is also a Fellow in the American College of Healthcare Executives.

Stapleton has previously served as a member of the School of Nursing’s Advisory Board. In addition to his service to Fisher’s Board, he sits on the board for Mercy Flight Central, Holy Childhood, Hospital Association of New York State, American Hospital Association Region 2 Policy Board, and the Penn State Parent’s Council. Stapleton also holds a master’s degree in leadership in healthcare systems from the University of Rochester’s School of Nursing and a bachelor’s degree in psychology from SUNY Oswego.

“The Board is committed to continually evolving its membership to represent a wide and diverse set of experiences, perspectives, and backgrounds,” said Board Chair Diana L. Nole, the first female to serve in the role. “Michael and Dan are valuable additions to the Board and their contributions are already having a positive impact on the work the Board is undertaking with President Rooney and the College.”