On the cusp of its 75th anniversary, St. John Fisher College will become in name what it has been in practice for more than a decade, and transition to become St. John Fisher University (SJF). The new name will be effective July 1. 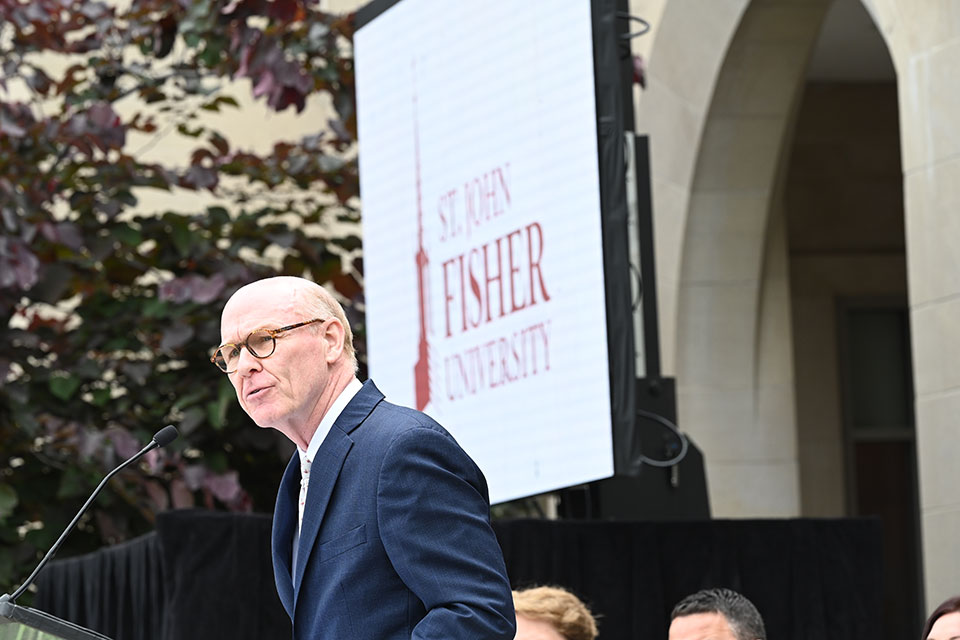 President Gerard J. Rooney, joined by Board of Trustees Chairman Tom Bowles ’71, revealed Fisher’s new status and logo during a celebratory event held on Monday, June 20, which also marked the 73rd anniversary of the institution’s groundbreaking ceremony for the construction of Kearney Hall, Fisher’s original building.

“Fisher’s university status adds to our rich history of institutional achievements and accomplishments. It will convey greater prestige, allow us to build our reputation and impact, and better represent the type of institution we are today,” Rooney said.

He added that fundamentally, Fisher will remain committed to delivering a student-centered education while serving the best interests of the surrounding community, making an impact locally, and as its reputation increases, throughout the country and the world.

“As we look to our seventy-fifth anniversary in 2023 as St. John Fisher University, we will continue to work hard each day to serve our students by providing a rich educational experience and a robust living and learning environment, and to prepare students to build successful lives of purpose,” Rooney continued. “And as we become a University – we will continue to strive to move Fisher forward, renew our purpose, and broaden our impact.”

Fisher’s evolution was bolstered with the introduction of a new MBA program in 1983; leading the Board of Regents to approve the College’s charter change from an undergraduate to graduate degree-granting institution. Over the next several decades, Fisher enjoyed consistent enrollment growth as it expanded its academic offerings, co-curricular experiences, and campus footprint. In the early 2000s, Fisher reorganized into five Schools: the School of Arts and Sciences, School of Business, Ralph C. Wilson, Jr. School of Education, Wegmans School of Nursing, and Wegmans School of Pharmacy. During that time, Fisher also added two doctoral programs—the Doctor of Pharmacy and the Doctor of Education in Executive Leadership—to its academic portfolio, paving the way for the Carnegie Foundation to reclassify it as a Doctoral/Research University—now known as a Doctoral/Professional University. Since then, Fisher has awarded more than 3,400 master’s degrees and nearly 1,600 doctorate degrees to its alumni base, which is more than 30,000 strong.

Bowles, who has served as a Trustee since 1993, credited innovative academic offerings, directed philanthropy, and talented administration, faculty, and staff with Fisher’s substantial growth over the years.

“Fisher has always embraced the student experience; we have stayed true to our mission and purpose and that has allowed us to be successful,” Bowles explained. “This is a momentous occasion; university designation is a recognition of all we have accomplished over the last several decades.”

Fr. Kevin Mannara, director of campus ministry and a member of the Congregation of St. Basil, the institution’s founders, offered the new University a blessing and reflected on the founders’ early vision. In Fisher’s history, more than 80 Basilian Fathers have served the institution.

“Seventy-four years ago, the Basilian Fathers eagerly responded to an invitation by Bishop James Kearney to found a college to serve Catholic men who had been facing obstacles to access higher education,” said Mannara. “This is a proud day for the Basilian Fathers, as the college we founded becomes a university. It is our ongoing prayer that the students served by St. John Fisher University will live lives modeled after our patron: lives of learning, lives of service, lives of glorifying God in all they do and all they become.” 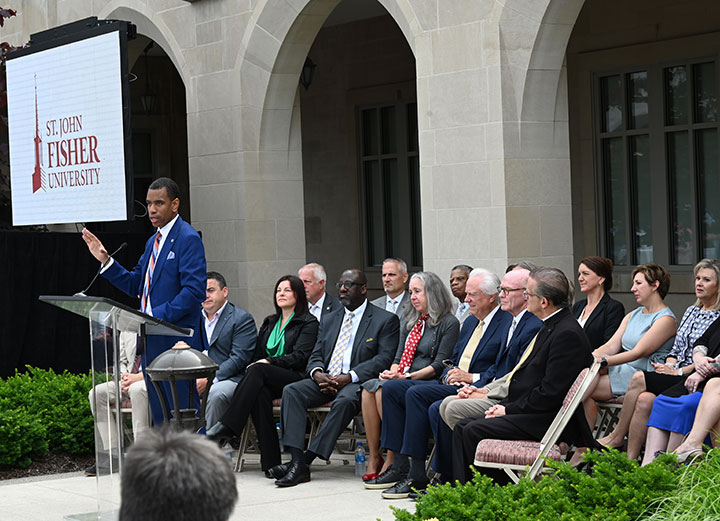 “I am very honored and pleased to congratulate the administration, faculty, staff, students and alumni of St. John Fisher for this remarkable achievement of gaining university status,” said Mayor Evans. “Fisher’s continued evolution from a small Catholic college with 10 teachers and 11 majors to a university that is advancing the progress of teaching and learning through groundbreaking research is a proud moment for our entire community. The presence of another university in our region will elevate our reputation as a center of knowledge and innovation and help us reach our goals to create a safe, equitable and prosperous Rochester.”

“Monroe County is blessed to be home to many outstanding educational institutions like St. John Fisher, which has a longstanding history of academic excellence,” said Congressman Morelle. “Now, they will build upon that legacy and begin a new era as St. John Fisher University. I want to congratulate President Rooney and the entire St. John Fisher community for achieving University status, and I look forward to their continued growth and success in the years to come.”