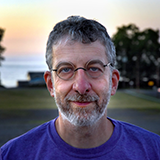 Jeremy Sarachan has taught at Fisher since 2002. He is a documentary filmmaker with interests in media activism.  He teaches Introduction to Media, Media Research and Analytics, Documentary Production, Film and Television Analysis, Political Theater, and an Honors class: Staging Resistance.

In addition, he is also an experienced theater director.